The Vancouver Canucks are teetering.

Returning home from a two-week trip, in which the team won once and lost six times, a feeling of frustration pervaded the Canucks after practice on Friday, ahead of a six-game stretch that could define their prospects for the rest of the season.

The long losing skid has already sunk the team below the playoff bar. The Canucks, as of midday Friday, sat 10th in the Western Conference and fourth in the weak Pacific Division. Like last year, it looks certain the powerful Central Division will send five teams to the playoffs in the West, which makes the line between third and fourth in the Pacific the essential marker for Vancouver.

"We all see the standings, everyone wins around us, and if you don't start winning soon, you're going to be out of it pretty quickly," captain Henrik Sedin said after practice.

"We've got to treat every game as a crucial one."

The one-quarter mark of the season may be early for such talk but it underlines Vancouver's precarious position. Even if, for instance, Arizona fades somewhat and slips from its current position in third in the Pacific, Anaheim is making a significant push from below, after the Ducks' terrible start to the year.

"We have a team that I feel can make the playoffs," Sedin said.

The situation isn't the result of any grand failing, rampant injuries or notably deficient roster. It's been the one-goal games that have been the team's bane this season, the opposite of last year, when Vancouver surprised onlookers by posting a 101-point season, eighth-best in the NHL.

Those Canucks were not quite as good as their finish looked – quickly proved when they were upended by the Calgary Flames in the first round of the playoffs – and these Canucks are not some also-ran. But a scenario in which the Canucks spend the last three-quarters of the season in the ballpark of 10th in the West, scratching to catch up but never quite making up the ground, looks possible.

One-goal games often pivot on puck luck. But Sedin said it's not luck. The Canucks have lost focus for short stretches of games, where several shifts don't go well. And mistakes have hurt, such as the porous penalty killing of late.

The Canucks, also, are not closing out games they once did. With a lead at the second intermission last season, they won nearly every time, 30 of 34 games. This year, they've won five of 10.

And this season, once they're behind, they lose. The Canucks have lost all seven games they've trailed after the first period. Last year, they won one-third of such games, nine of 27.

The new three-on-three overtime is a particular problem and partly accounts for the swing in fortunes in one-goal games.

This year, they're 1-6. They've lost six games in three-on-three and won one shootout.

"That overtime hasn't been kind to us," coach Willie Desjardins said.

But the Canucks didn't allocate any practice to it on Friday. They were off on Thursday, but play Saturday and Sunday. There's another off day on Monday and a practice early Tuesday before a flight that begins another grinding trip, four games, including the NHL-best Dallas Stars. Given the schedule, the chances to practise three-on-three aren't abundant.

"We have to take more risks," defenceman Luca Sbisa said of the new overtime format.

Sedin had what at first seemed like an odd remedy: control the puck less. What he meant was that setting up in the offensive zone doesn't seem to be the way to win. Goals in three-on-three are scored on turnovers or rushes in the opposite direction that occur when a shot misses the net.

"It's so tough to create chances when you have the puck," Sedin said. "Less is more."

Canucks fall below ‘fine line between winning and losing’ on road trip
November 15, 2015 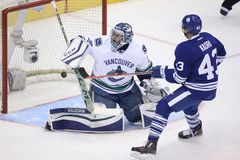 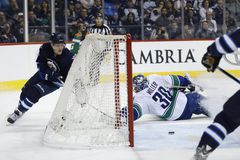 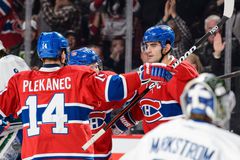