A player watching from the press box never wants a teammate to struggle, but it's often the only way back in the lineup.

The veteran defenceman will suit up on Tuesday when his Ottawa Senators visit the New York Rangers after sitting out the last two games as a healthy scratch.

Phillips replaces Patrick Wiercioch, who struggled in the Senators' 3-2 loss to the Carolina Hurricanes on Saturday.

The 36-year-old Phillips has been a healthy scratch seven times this season, all since Dave Cameron replaced Paul MacLean as head coach.

"To be brutally honest it's a really hard position," Phillips said Monday of sitting out. "You want to see the team win and we want to push to get in the playoffs, (but) the reality is if we don't win there's probably a better chance that I might get in the lineup the next game. Obviously I'm not hoping for that, but in the back of your mind you think: 'Well maybe I might be in next game if that's how it turns out.'

"It's kind of a weird feeling."

With seven healthy defencemen the reality is someone always has to be the odd man, out and soon enough it will be two as Mark Borowiecki continues to rehab his leg injury.

"It's difficult," said Phillips. "It's not a position that anybody wants to be in. If it's me in the lineup then it's one of the other guys that's out and that's not where they want to be. I guess in some ways that's what you want is for us to be pushing each other and we need to be on top of our game to stay in the lineup."

Phillips is in the first of a two-year contract and has a limited no-trade clause. While no discussions have taken place, the veteran knows management could approach him at some time after the all-star break about the possibility of a move.

Tuesday's game will also feature the return of rugged forward Chris Neil, who has missed the last 16 games with a knee injury.

"I worked hard to get back," said Neil. "I feel strong and ready to go."

Neil said it's been difficult to be sidelined, but added he's anxious to get back in the lineup and contribute.

With just two games remaining before the all-star break the Senators would love to finish on a high and start to string some wins together. Heading into Monday's action the Senators sat 10 points out of a playoff spot, but remain optimistic they can close the gap.

The Senators haven't had a winning streak of more than two games this season, but Cameron said the team has to start burying its scoring chances.

"That's probably the one biggest thing if you want to break it down," he said. "We keep talking about the focus everyday of practice and games and all you can do is work on the things that give you the best chance to win."

Senators general manager Bryan Murray spoke on local radio Monday morning and said he hasn't given up on trying to find a top-six forward.

Murray said the ideal candidate would be a "youngish" player with term remaining on his contract or someone with interest to re-sign.

It appears the Senators are also prepared to make a decision on the future of forward Colin Greening.

Murray was seen talking to Greening at the end of Monday's practice and said that it's likely the 28-year-old will end up on waivers.

"I just told him eventually here if we don't get something done he's got to play hockey and you can't play hockey as a 23rd or 24th guy on the roster so I may have to put him on waivers at some point in time," Murray told TSN 1200. "In the meantime we're going to look and see if there's some way of accommodating him and giving him a chance of continuing his career.

"He just doesn't fit with us right now."

Murray added he has given Greening's agent permission to speak to other teams as well.

The Ottawa GM also put to rest any rumours about the Senators trading Craig Anderson, who will get the start Tuesday, at the deadline.

"Why would I do that at this point?" said Murray. "We don't have a third goaltender. Robin is close to ready, but he's got to play more games. If you don't have goaltending in this league you don't have anything. We know that ... it's unlikely that Craig Anderson is going anywhere but the net in Ottawa."

Note: Veteran NHL forward Todd Bertuzzi, who was on a professional tryout with the Binghamton Senators, has returned home to have his knee examined after it was injured during a game. Senators assistant general manager Pierre Dorion said Bertuzzi was a great asset to the young players in Binghamton and the door remains open for him to return. 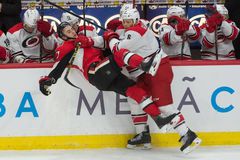 Pageau’s first of season stands up as winner as Sens beat Habs
January 15, 2015 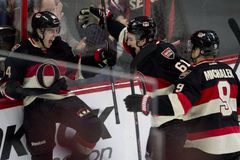 Stars rally from behind to beat Senators
January 14, 2015 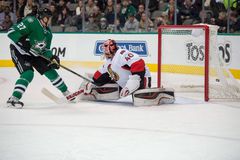