If the financing plan for a second NHL-sized arena in the Greater Toronto Area is voted down Tuesday night by Markham city council, the only casualty may be Graeme Roustan, one of the two private partners in the project, not the arena itself or even hopes of landing an NHL team.

Roustan, the former chairman of Bauer Performance Sports Ltd., is promoting the $325-million, 20,000-seat arena with the financial backing of prominent developer Rudy Bratty through his company The Remington Group Inc. However, a senior Remington executive distanced the company from Roustan in the wake of questions about a string of his previous business dealings in the arena business in the United States, two of which resulted in civil judgments on grounds of fraud against either Roustan or a company he was associated with.

In addition to the financing plan, Markham council will also vote on a motion to investigate the private partners, which is aimed at Roustan.

Roustan could not be reached for comment Sunday but when the questions of his business dealings and a background check first came up in late November he said he would welcome one. He acknowledged a Texas civil court ruled he committed statutory fraud in an arena deal in Fort Worth and a civil court in New Jersey found a company he was involved with, Roustan United LLC, committed fraud. But the Texas case is being appealed to the state's Supreme Court and in the New Jersey case, Roustan said a sub-contractor to his company was actually responsible for the damages and he is preparing to sue that company for the $482,419.14 (U.S.) judgment against his company.

"There's a bit of grandstanding going on but I'm not worried about it at all," Roustan said of the call for due diligence on the private partners. "So of all the hundreds of transactions I've been involved in there are a couple that stink and they stink.

"But hopefully when people who do background checks look at things, they go, 'He didn't kill anybody, there's no criminal stuff there, there's a couple civil things. It is what it is. Do I run from it? No."

Adding to the intrigue is the presence of former Montreal Canadiens owner George Gillett. While some reports incorrectly said Gillett is a potential rival to Roustan and Bratty in landing an NHL team, he attended two weekend meetings with Markham councillors at the invitation of councillor Jim Jones, but only to inform them about the methods of doing business with the league.

A source said Bratty was at Saturday's meeting while Markham Mayor Frank Scarpitti declined to attend either session. Scarpitti is lobbying hard with his fellow councillors to get the financing plan approved and is an enthusiastic backer of Roustan.

The arrangement with Roustan and Remington calls for the city to borrow the $325-million for arena. The private partners say they will repay half of the loan, $162.5-million, while the city is to pay off the other half through volunteer levies on developers for new housing plus parking revenue and surcharges on event tickets.

Randy Pettigrew, senior vice-president of land development for Remington, said Sunday if the financing is voted down it does not necessarily mean the end of Bratty's involvement with an arena. But he also repeated something he told The Globe and Mail in late November, that Remington does not have a formal business relationship with Roustan, just a funding agreement.

Under that agreement, Remington receives a statement from the company Roustan formed to handle the project, GTA Centre LP, about what payments are needed and then advances the money. As of late November, almost $1-million was paid by Remington to GTA Centre for such costs as the architect's designs and consultants' fees, according to Roustan.

Roustan admitted he and Bratty "don't have a partnership agreement, we're not partners," but said Bratty is a "guarantor for me."

However, Pettigrew said Remington is not bound to Roustan and said the company could proceed with a new partner and a new financing plan for the arena if council rejects the current one as long as it is a good deal for Remington.

Even though seven of Markham's 13 councillors have publicly said they will vote against the current financing plan, Jones, one of the main opponents, is not counting on anything. "I don't know what's going to happen Tuesday night," he said. 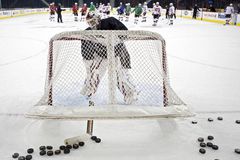