By any statistical measure, the Ottawa Senators' dynamic third-year defenceman, Erik Karlsson, should be the heavy favourite to win the Norris Trophy this season. Karlsson is the reigning player of the week and was chosen by the NHL Thursday as its "second star" for the month of February. Pretty good stuff. Scoring-wise, Karlsson is miles ahead of the defensive pack. His 66 points are 23 more than runner-up Brian Campbell of the Florida Panthers and the defencemen ranked second-to-14th are all bunched up, 13 of them separated by eight points, a list that includes most of the perennial favourites for the award: Duncan Keith (Chicago Blackhawks), Zdeno Chara (Boston Bruins) and Shea Weber (Nashville Predators).

Ultimately, that will be the primary question for voters when they cast their Norris ballots: How much consideration do you give an offensive dynamo such as Karlsson for an award that officially goes to "the defence player who demonstrates the greatest all-around ability in the position."

Sometimes, it is the wording of these awards that creates the greatest confusion and controversy. Chara obviously demonstrates the greatest all-around ability in the position, and if not Chara, then it's probably the Detroit Red Wings' Nicklas Lidstrom, still a candidate at the ripe of old age of 41. Karlsson doesn't defend nearly as well as either. If you were starting a team from scratch and had the choice of one of the three in their primes, you'd probably pick Karlsson third.

But the 2012 Norris Trophy is all about the 2011-12 NHL season, a year in which Ottawa is exceeding all expectations. Once you give due credit to Paul MacLean's coaching, to Craig Anderson's goaltending and to Jason Spezza's scoring, you'd be hard-pressed not to identify Karlsson as the team MVP. If Karlsson isn't the catalyst that he is, offensively and defensively, then the Senators are nowhere near the team they are today, unexpectedly pushing the defending Stanley Cup champion Boston Bruins for top spot in the Northeast Division.

Probably, the best way to assess Karlsson's chances are to filter them through the Paul Coffey prism. As with Karlsson, Coffey was a high-end offensive talent who spent most of the 1980s putting up eye-popping numbers that left him miles ahead of his competitors on the scoring charts. As with Karlsson, there were always questions about Coffey's overall defensive game.

The 1984 voting was particularly contentious, a year in which Coffey scored 40 goals and 126 points in 80 games and finished second in league scoring, behind Edmonton Oilers' teammate Wayne Gretzky. In addition, Coffey was an amazing plus-52 for an Oilers' team that went 57-18-5 in the regular season, tops in the league by 15 points and won its first Stanley Cup.

Given those achievements, it is hard to imagine that Coffey didn't coast to the Norris that year, but he didn't. Instead, he lost out to the Washington Capitals' reliable Rod Langway, a well-known, well-spoken, well-liked former Montreal Canadiens player who had won the 1983 Norris as well.

In 1984, under coach Bryan Murray (more on him later), Washington finished fifth in the 21-team NHL and was miles ahead of everyone else defensively (226 goals-against, next best team was the Buffalo Sabres with 257 goals-against).

So that was the choice for voters - Coffey, running up offensive numbers not seen since the Bobby Orr years, or Langway, the best defenceman on the best defensive team in the league. In the end, presumably because they imagined Langway demonstrated the greatest all-around ability at the position, voters picked him over Coffey. Curious, but true.

Coffey, at 22, and in his fourth full NHL season faced the same sort of challenge that the 21-year-old Karlsson will face this year - and the most curious twist of all is this: In Langway's winning years, it was none other than Bryan Murray, his coach at the time, who did such a wonderful job extolling all of Langway's virtues - character, leadership, defensive ability. Now the general manager in Ottawa, Murray will likely be asked to make the same persuasive case for Karlsson, the latter-day Coffey.

Karlsson's chances should be greatly enhanced by the fact that he is much improved defensively year over year. He isn't Lidstrom yet, but he isn't getting blown past, or overpowered physically the same way he was when he first came into the league.

Plus-minus is a flawed statistic in some respects, but Karlsson's improvements there are dramatic as well - he was a minus-30 last year, he is plus-15 as of Friday morning. All in all, you'd have to think that if Karlsson can keep up this level of play over the final quarter of the season, the voters will be unable to overlook the impact he's had on his team, even if defensively, he remains a work in progress.

AND ANOTHER THING: So this is the new NHL. Huh. Not exactly as advertised. It is Year 7 now since the lockout ended, which was supposed to usher in a new era, featuring more offence, more attack, and more of the stuff that lifts fans out of their seats. So what happens? Goal-scoring, in that seven-year span, on a per-game average, is slip-sliding away. From a high of 6.1 in 2005-06, it dropped to 5.8 the next year, and then had seasons averaging 5.4, 5.7, 5.5, 5.5 again - and this year, the league is on pace for a new low, 5.3.

Part of the reason is power-play chances are down, also at a seven-year low (6.9 compared to the over-refereed call-crazy 11.7 in the first post-lockout year). But mostly, the NHL isn't about offence, except when you get a crazy 7-0 Winnipeg win over Florida (those Jets periodically come up with some quirky entertaining doozies).

But on Thursday night, in a matchup of the league's two top teams, St. Louis and Vancouver, it was 0-0 until five minutes into the third period when Alex Burrows scored against Elliott in a game that finished 2-0 with an empty-netter from Chris Higgins. St. Louis-Vancouver is a possible playoff match-up and though the compete level of the game was high, the idea that every game is going to be this close-to-the-vest style. Maybe time for a second Shanahan Summit. Something's gotta change.

THE RYAN EXPRESS: Hard to believe, but the two-year anniversary of Canada's men's Olympic gold-medal victory passed quietly earlier this week, meaning the countdown to Sochi 2014 - and the questions about whether NHL players will participate this time around can begin in earnest now. Sabres goaltender Ryan Miller, MVP of the Olympic tournament, returns to GM Place Saturday when the Sabres visit the Canucks, and he is on a roll again. After a mediocre start to the season, punctuated by a concussion, Miller has stopped all 82 shots on the Sabres' current West Coast road trip. Miller shut out Anaheim and San Jose on back-to-back nights, making him the first goaltender in almost two years to record shutouts on consecutive evenings (as opposed to back-to-back games). The last to do it? Miller as well - back on Dec. 3 and 4, 2010 ... Some players traded from West to East can wait up to two years to play their original teams, but that won't be the case for Cody Hodgson, who is back in Vancouver to face the Canucks, only five days after he was traded to the Sabres for Zach Kassian. By the way, there was some the confusion about the number of trades completed on Monday, trade-deadline day. Some reported it as 15, others 16. Sixteen was the official tally, according to the NHL, because they counted the exchanges between Buffalo and Vancouver as two separate deals. Officially, Hodgson was traded for Zach Kassian; and Marc-Andre Gragnani for Alexander Sulzer. The tally also included three trades involving minor leaguers: Anaheim sending RW Andrew Gordon to Vancouver for D Sebastien Erixon, the Ducks sending D Mark Fraser to Toronto for RW Dale Mitchell; and the Leafs sending D Keith Aulie, who'd been up and down from the Marlies this year, to Tampa for C Carter Ashton. Aulie for Ashton was an interesting transaction; the other two, just minor shuffles, but they helped boost the deadline-day numbers, which is important to TSN and all the betting sites that posted odds on how many deals would actually take place. If I lost a bet because of Gordon for Erixon, or Fraser for Mitchell, I'd be one unhappy camper right now.

Leafs closer to figuring things out than it appears
February 29, 2012 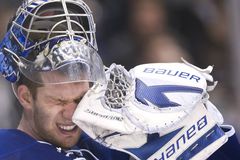 Good things might come to Howson who waits
February 28, 2012 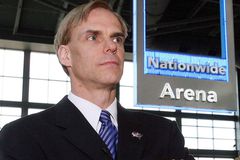