Wayne Gretzky is returning to the city he made famous. The former Oilers star is opening a restaurant in September at Edmonton International Airport.

Construction on No. 99 Gretzky's Wine & Whisky restaurant is nearly complete. The saloon on the departures level will be markedly different from the restaurant he opened in Toronto in 1993.

The busy establishment near Rogers Centre is decorated with memorabilia and is a tribute to his Hall of Fame career. The airport eatery has a mural of the Great One at its entrance, but will otherwise feature more elegant décor.

In Edmonton, where a road is named in his honour and people flock to see a statue in his likeness, nobody needs a reminder of the four Stanley Cups he delivered during the 1980s over five years.

"As an Edmontonian, you know what impact he has had on this city," Heather Hamilton, a public affairs officer at the airport, says. "He has been gone for nearly 30 years, but his iconic status is not diminished.

"The restaurant's opening and existence is going to be exciting for hockey fans, and that means just about everyone. His association with Edmonton lives on."

The establishment is a partnership between Gretzky and HMSHost. The firm operates restaurants in more than 120 airports worldwide, including 44 of the busiest 50 in North America. Many, including the Avenues des Canadiens in Montreal, the Vancouver Canucks Bar & Grill, Stanley's Blackhawks Kitchen & Tap at Chicago O'Hare International Airport and the Sharks Cage Bar & Grill in San Jose, Calif., carry sports themes.

"Given the powerful impact Wayne Gretzky has had on not only the global hockey scene, but in his early years with the Edmonton Oilers, it is more than fitting to partner with him in opening his first airport location," Sean Matthews, the senior manager of communications for Maryland-based HMSHost, says. "We are thrilled."

Widely considered the greatest hockey player of all time, Gretzky played in Edmonton for 10 seasons before a shocking trade to the Los Angeles Kings in August, 1988. He concluded his career in 1999 with an NHL-record 894 goals and 2,857 points in 1,487 games and contributed to 48 per cent of the Oilers' goals from 1979 through the 1987-88 season.

The airport eatery features an extensive international wine list, including vintages from Wayne Gretzky Estates Winery in the Sonoma Valley, British Columbia's Okanagan region and the Niagara Peninsula. The brand, which dates to 2007, is now marketed by industry giant Peller Estates.

Gretzky's No. 99 Wine and Whisky will offer a full-service restaurant and bar, and a menu that includes everything from perogies to salads, sandwiches and more elaborate entrées. The date for the grand opening is yet to be announced, but the restaurant is already causing a stir around the airport, where the baggage area is decorated in an Oilers theme.

"We work at the airport and do our jobs and are professionals, but there are times that coming to work is more exciting than others, and this is one of those times," Hamilton says. "We have a lot of people volunteering to take a shift the day the restaurant opens."

A keyboard player and singer for a garage band when she was in high school, Hamilton says her band's biggest break was getting invited to open at a local jazz club for pianist and composer Tommy Banks.

"The place was empty," Hamilton recalls. "You could have fired a cannon through it and not hit anybody."

The gig conflicted with something a little more important. It was the night of a playoff game between the Oilers and Flames in Edmonton. 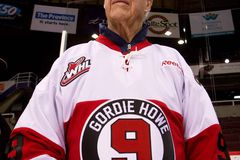 The story behind the long-lost, long-haired Wayne Gretzky card
March 3, 2016 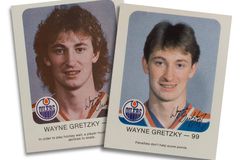 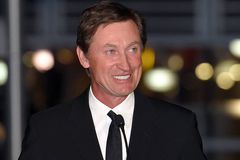