Canada's 2015 gold-medal-winning world junior team could go down as one of the country's best teams in history. Canada went 7-0 and outscored opponents by 30 goals on the way to snapping a gold-medal drought and winning on home ice in Toronto.

Here's a look at where the players from that team are already, a year after their road to gold began:

Zach Fucale: Called up by the Montreal Canadiens to serve as Mike Condon's backup for three games, Canada's gold-medal-game starter has a .907 save percentage and 3.12 goals-against average for the American Hockey League's St. John's IceCaps in his first season as a professional.

Eric Comrie: Like Fucale with Carey Price, an injury to Winnipeg Jets goaltender Ondrej Pavelec opened the door for Comrie to start with the AHL's Manitoba Moose. He has a .912 save percentage and 2.90 GAA in the AHL.

Madison Bowey: The right-handed-shooting Bowey is one of the Washington Capitals' top blue-line prospects and has a goal and two assists with the Hershey Bears of the AHL.

Dillon Heatherington: A second-round pick of the Columbus Blue Jackets in 2013, Heatherington is 17 games into his pro career with the AHL's Lake Erie Monsters and has a goal and two assists.

Joe Hicketts: A long shot to make the team in 2015, Hicketts is a point-a-game player for the Western Hockey League's Victoria Royals and is expected to return for Canada in 2016.

Sam Morin: The 2013 first-round pick was Canada's seventh defenceman and is getting a chance to play a lot with the AHL's Lehigh Valley Phantoms as the Philadelphia Flyers are preaching patience with their prospects.

Josh Morrissey: A top prospect for the Winnipeg Jets, Morrissey has played in all 21 games this season for their top affiliate, the Manitoba Moose, and could make the leap to the NHL next season.

Darnell Nurse: After starting the season in the minors, Nurse was called up by the Edmonton Oilers in late October and hasn't looked back, averaging over 20 minutes in his first 19 NHL games with many more to come.

Shea Theodore: In his first professional season in the AHL, Theodore is third on the San Diego Gulls in scoring with three goals and 10 assists. he got a taste of the NHL with a call-up to the Anaheim Ducks, but didn't get into a game.

Lawson Crouse: A bottom-six, role-playing winger for Canada a year ago, Crouse is a point-a-game dominant force for the Kingston Frontenacs of the Ontario Hockey League and is set for a bigger role back at the world juniors.

Max Domi: One third of the uber-productive top line with Anthony Duclair and Sam Reinhart, the 20-year-old son of former NHLer Tie Domi is tearing up the NHL with the Arizona Coyotes. He's second in rookie scoring behind only 24-year-old Russian Artemi Panarin.

Anthony Duclair: After an NHL cameo with the New York Rangers and a star performance at the world juniors, Duclair was traded to the Coyotes and is among their best offensive players along with Domi.

Robby Fabbri: Slowed by an injury early, the 19-year-old who's still eligible for the world juniors has eight points in 22 games for the St. Louis Blues and stole the show in Connor McDavid's NHL debut back in October.

Frederik Gauthier: The Toronto Maple Leafs' 2013 first-round pick who was a shutdown centre for Canada. He is now a role player with the AHL's Marlies and has 10 points in 22 games.

Curtis Lazar: Canada's captain was already in the NHL with the Ottawa Senators and continues to fit in nicely as a complementary player and one of the happiest people in the sport.

Connor McDavid: Before breaking his left clavicle, the No. 1 pick was shining for the Oilers with five goals and seven assists in 13 games and should be a star and face of the league for a long time.

Nick Paul: The centrepiece of the return for Jason Spezza in the Senators' trade with the Dallas Stars, Paul is one of the franchise's top prospects and has seven assists for the AHL's Binghamton Senators in his first pro action.

Nic Petan: The former Portland Winterhawks standout surprisingly made the Winnipeg Jets out of training camp and had a goal in 14 games before being sent down to the Moose for some more seasoning. He already has four points for Manitoba.

Brayden Point: Like Hicketts, Point came from the back of the pack at camp a year ago to make Canada's roster and also impressed at Tampa Bay Lightning camp before going back to dominating for the WHL's Moose Jaw Warriors. He'll be a big piece in 2016.

Sam Reinhart: The No. 2 pick from 2014 who was one of Canada's best players has made a smooth transition to the NHL with the Buffalo Sabres. He has eight goals and three assists and has had chances to play alongside No. 2 overall pick Jack Eichel.

Nick Ritchie: Even if his role wasn't a big one for Canada, the six-foot-two, 232-pounder earned a call-up to the Ducks and has played 11 games since, recording his first NHL point Nov. 30.

Jake Virtanen: Canada hoped to have Virtanen back in 2016 and still could even though he made the Vancouver Canucks out of training camp. He has a goal and three assists in 19 games. Because he's on a conditioning loan in the AHL now he might be available. 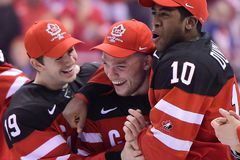 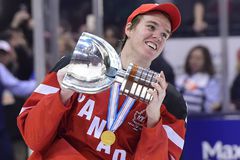 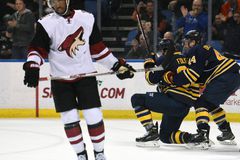