Four games on the road, in six nights, tramping across a large swath of the continent, Minnesota, Chicago, Dallas, Colorado: This itinerary, for the Vancouver Canucks, will be a respite from recent woes as the team fights to shake off a slump as the playoffs draw near.

The mood Saturday night in Vancouver was hardly celebratory as the Canucks barely beat the worst team in the league, a 4-3 win over the scrapping Columbus Blue Jackets. As is the case on many game nights, most players immediately hit the gym for weights before heading to their homes, ahead of an 11:30 a.m. Sunday takeoff for Minnesota.

While such a week on the road would grind many teams, the Canucks have thrived on such travel.

Chris Higgins, one-third of Vancouver's potentially explosive American Express line, said the last trip of the regular season will give the team ample time to regel, as friends and teammates. Call it camaraderie-as-salve for a 3-4 run in seven games at home.

"It's nice to hang around the guys, you spend most of the time around the guys," Higgins said Saturday night of the plane-bus-hotel-rink road routine. "I think we just play a simpler game on the road, we don't try and impress anybody, we play direct, straight-up hockey."

The Canucks, after posting a losing record on the road in 2009-10, have been fierce away from Rogers Arena, and the attendant media/fan attention. It started in the 2009-10 playoffs, when Vancouver lost 4-2 to Chicago in the second round. It happened because the Canucks went 0-3 at home and 2-1 on the road. Then last season, Vancouver had the NHL's best road record, 27-10-4 (almost exactly matching its home record). This campaign, the Canucks' road and home records are again a near-mirror, and the team's road tally, 22-10-4, is the best in the West and No. 2 in the league.

Higgins, while knowing the team's results in any venue are close to exactly the same, said there is a bit of a different feeling among players, even if game preparation and other rites and rituals are pretty much the same.

"We just try to do a little bit too much at home, impress the fans a little bit," he said. "I think on the road we're just trying to get a win, and that's it."

The latter three games of the trip will be the most indicative of the state of the team. Chicago, Dallas and Colorado are all potential playoff opponents, in the first or second rounds, and all are playing well. As of Sunday morning, the Blackhawks were 6-3-1 in their past 10, the Stars 7-2-1, and the Avalanche 6-3-1 (including a Saturday-night 3-1 victory over the New York Rangers at Madison Square Garden).

Losing a little focus is not unusual, said one of the newest Canucks, veteran centre Samme Pahlsson. Acquired recently from Columbus, he suggested on Friday that strong teams do look ahead, even as coaches such as Vancouver's Alain Vigneault preach the one-game-at-a-time religion. (The Canucks have such a lock on at least No. 2 in the West that number-crunching website sportsclubstats.com says that even if they go 2-7-2 over their last 11, they would still have a 90-per-cent chance of holding on to No. 2.)

"We're not set for the playoffs yet but we're pretty much there," Pahlsson said after a Friday morning practice ahead of the Blue Jackets. "Maybe guys look too far forward and focus on that instead of the game we're playing right now."

Cory Schneider, the backup goaltender who is having a great season, played only so-so on Saturday. He'll likely get the start in Minnesota, though Vigneault had not made that call publicly as of Sunday. Schneider, after the close win Saturday night, talked about the Canucks' confidence on the road, alluding to the science employed by the team to aid their players. Vancouver employs sleep scientist Pay Byrne, who works for Honolulu-based Fatigue Science, which quantifies sleep and tailors programs for the team and individual players.

"We feel really comfortable on the road," Schneider said. "We're not afraid of travelling to other team's buildings. It'll be a good measuring stick, good test, to see if we can turn this around." 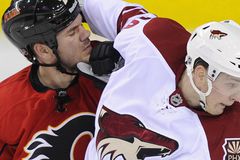 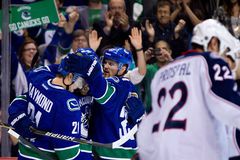