She felt the burden of easing geopolitical tensions had been unfairly heaped upon women who just wanted to play hockey.

But witnessing what that team meant to Koreans – and a chance meeting with the players on a beach – changed her mind and put her on a plane to North Korea.

If women's hockey was a symbol of peace, Wickenheiser wanted it to last beyond the closing ceremonies.

"It couldn't die there," she told The Canadian Press in an interview Thursday.

Wickenheiser ran practices for North Korea's national women's and men's teams. She reunited with some of the women she'd met at the Olympics.

North and South Korea agreed in late January to combine players from both sides of the demilitarized zone on one host women's team.

The International Olympic Committee quickly approved it, even though it meant strangers were suddenly teammates.

Wickenheiser, the all-time leading scorer on Canada's women's hockey team who retired last year, went to the Pyongyang Games in February as a member of the IOC's athletes' commission.

She happened to meet the Korean team on a beach prior to their first game.

Coach Sarah Murray asked Wickenheiser to say a few impromptu words of encouragement to the players. Wickenheiser sensed the North Koreans were tense that day.

The outpouring of emotion when Korea's women played under a unified flag convinced Wickenheiser a door had opened.

Even though Wickenheiser was in the midst of trips to India to develop women's hockey there, the 39-year-old from Shaunavon, Sask., wanted ice time with the North Koreans.

"I wanted to show those women that someone cared after the fact about them as human beings and as hockey players, not as part of a larger agenda," she explained.

Wickenheiser, who lives in Calgary, admitted she had to overcome her fears of the unknown on the flight from Beijing to Pyongyang.

Her visit came on the heels of heated rhetoric between North Korean leader Kim Jong-un and U.S. president Donald Trump.

Wickenheiser felt cut off from the world as internet access and cellphone service were not available to the masses.

She was chaperoned everywhere in Pyongyang. She said her contact with the public was limited to hockey players, most of whom don't know who Sidney Crosby is.

Wickenheiser had consulted with Canada's Foreign Affairs Department and the Prime Minister's Office about travelling to the secretive hermit kingdom.

"I sent my parents one number at the PMO to call if I didn't show up on March 6th and told them where my will was and away I went," Wickenheiser said with a wry chuckle.

"I wasn't there to create world peace," she said. "I can't speak to any of the human rights stuff. I'm very well aware I saw what they wanted me to see those two days in Pyongyang."

Wickenheiser did talk to sport officials about the possibility of getting a North Korean team to her annual Wickfest women's hockey festival in November.

She went to North Korea with the help of the Friendship League operated by Canadian Scott Howe and Frenchman Gordon Israel.

So Wickenheiser joined 15 men from across Canada who played against and alongside members of North Korea's men's team.

"When I got to the rink, I was a little bit late for the start of the men's practice," she said. "I threw my skates on, I had jeans on, I went out and started running practice for the national team."

"The girls had heard I was there and came up to me and were very, very happy. A much happier, and a more warm reception than when I met them on the beach in Pyongyang.

"I think they were so overwhelmed and probably afraid and not in their environment. And then here they'd had their Olympic experience, which I think was very positive for them. They saw me again and they were relaxed."

Wickenheiser took her 2014 gold medal into the men's dressing room. There was a lot of joking as the men mimed to her they wanted to keep it.

"I just felt like I could have been in any men's hockey dressing room anywhere in the world," she said.

Wickenheiser is aware hockey is a small bridge to North Korea that could be destroyed by larger political forces. But she hopes the bridge holds.

"I believe in the power of sport," Wickenheiser said. "It can move the world forward."

How a North Korean defector became the mother of women’s hockey in the South
February 12, 2018 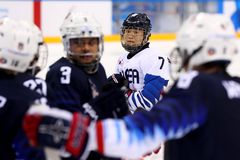 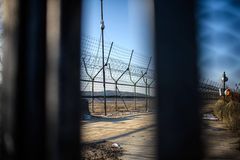