Two seasons ago, when the Vancouver Canucks had the best power play in the NHL, three teams went on epic man-advantage slumps.

Culling the ledgers of Elias Sports Bureau, the New York Islanders were blanked in 12 consecutive games, the Edmonton Oilers were dry for 11 games and the Columbus Blue Jackets were also 0-for-11. All three squads posted among the worst win-loss records in the league, with the Oilers dead last at season's end.

Last season, a team was skunked on the power play 13 games in a row, the first seven of which were a string of losses. The team managed to conjure some wins, going 4-9, during the period it was 0-for-37 on the power play. The slump came in the thick of the season, covering most of February.

The team – the Chicago Blackhawks – made the playoffs. But an ailing power play was one of the reasons Chicago was ousted in six games by the Phoenix Coyotes (the 'Hawks going 1-for-19 with the man-advantage in the one-and-out playoff appearance).

Which brings us to the Canucks. Going into Monday's game against the visiting Minnesota Wild, with the Northwest Division lead on the line, the Canucks had gone 11 consecutive games without a power-play goal, the worst drought in their 42 seasons in the NHL, according to Elias's Bob Waterman.

It felt like, at Rogers Arena, something hung in the balance. The tenor on the ice was immediately of a game that mattered a lot more than a typical tilt – physical, fast, and pucks flying, the Canucks near desperate to stoke scoring, as they played their first of five games in the next seven days.

Then, finally, midway through the second period, the Canucks on the power play for the third time in the game, the team attacked and attacked, coming so close, so close, and then, finally, after going 0-for-36 with the man-advantage, a goal.

It came off a Jason Garrison slap shot – the big-shot defenceman back on the first power-play unit for the first time in a long time – and the puck rebounded off an otherwise impressive Minnesota goalie Niklas Backstrom, and Henrik Sedin made no mistake, burying it for the 1-0 lead.

But Vancouver, beset by injuries to forwards, struggling in the faceoff circle, and with so-so goaltending, just couldn't conjure a victory.

Minnesota tied the game on a power play five minutes after Vancouver opened the scoring, and the Wild went up 2-1 early in the third period on a nifty deflection by Charlie Coyle. A third goal, from Matt Cullen, beat Roberto Luongo through the five-hole. Final score: 3-1.

Henrik Sedin sat at his locker after the game, frustration clearly on his face, waiting for the media horde to shift his way from Luongo.

"We played a solid game," said Sedin. "We've got to trust in our system."

There was a feeling the bounces are just not going the Canucks' way. Coach Alain Vigneault said the team was getting enough scoring chances to win games.

Fourth-line forward Dale Weise said the Canucks know they have the veterans to rally.

Yet Vancouver lost, again, taken down at home by the usurpers, the Wild, who take a two-point lead in the Northwest.

It was a night that was emblematic of a season of struggles for the Canucks. The Canucks have won just four games of their past dozen and, this year, are 13-9-6 – more losses than wins.

Finally, even with a power-play goal, the Canucks remain an abysmal 1-for-38, so the ailment is hardly cured.

A big reason for the long power-play drought has been a lack of shots on net. The Canucks are third-last in the NHL in shots per 60 minutes on 5-on-4s – but on Monday, they did drum up urgency, and pucks at the net. They did not wait and wait and wait for the perfect shot.

Recall Chicago. Even as their 13-game power-play slump didn't sink the 'Hawks, the team's feeble 1-for-19 against Phoenix in the first round contributed to the end of their season. And recall Vancouver. The power-play troubles began last winter, a year ago, and come spring, against the Los Angeles Kings, going 3-for-21 on the power play was a reason the Canucks were ousted in the first round.

The Canucks still have one of the very worst power plays in the NHL.

One goal snaps an ugly slump. Resuscitation will take some goals more, and actual revival will need a lot of red lights blaring behind opposing goaltenders.

The team's fate in this truncated season depends on it. 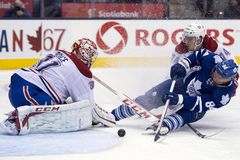 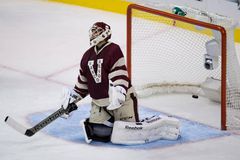 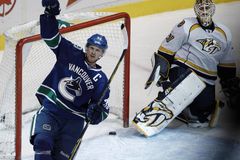