The polite phrasing is "knowledge transfer," but the simple truth is international hockey tournaments are a prime pilfering opportunity.

Everyone is there to win, but to some degree it's also about personal betterment, which means tapping all sources of artistic and technical inspiration.

Think of it as a benign form of industrial espionage.

Everyone does it. Ask around Team North America, the World Cup of Hockey's 23-and-under entry, and players will confirm they are watching and wondering and asking.

"You think about it all the time," Winnipeg Jets centre Mark Scheifele said in an interview this week. "You see a guy do something that's kind of cool, you ask him, 'Hey, what did you there, how did that work?' We pick each other's brains, I know I pick each and every one that I can, if you do that you're going to get better, it's a cool thing about these tournaments."

It might be pumping a coach from a rival team for information about defensive-zone positioning in his system; it could be chatting up a teammate about the way he reads the options on a given breakout play.

The specifics range from the nuances such as stick positioning, to equipment tweaks – hockey players at every level are relentless customizers – and off-ice strategies for conditioning and nutrition.

There's also an element of learning by osmosis – the environment itself is an education.

"I think you come here with the goal of learning certain things," Toronto Maple Leafs defenceman Morgan Rielly said. "Each guy knows what they need to improve on. … Part of it happens naturally. When you get really good players together you'll see how well something works and try to adopt it a little bit."

Like most of his teammates Rielly has had the benefit of playing in multiple single-elimination events at the international level – the world under-17 hockey challenge, the under-18 world championship, the Ivan Hlinka Memorial tournament and the world junior championship.

"Any time you get the experience of playing with the best you're going to try and learn from them and compare notes with one another," Rielly said.

Wringing specifics out of any given player is a challenge. Presumably it's uncouth to talk publicly about deconstructing an aspect of a teammate's game for one's own purposes.

The fact remains hockey, as with most pro sports, is a copycat game. The proof that an innovation is worthwhile generally lies in how quickly it is imitated.

Elite young hockey players generally have large reserves of confidence, but that's not to say they're above emulating others.

Why wouldn't Rielly, for example, study the way Philadelphia Flyers defenceman Shayne Gostisbehere runs the point on the power-play?

It would be eminently sensible for Leafs prospect Auston Matthews to seek inspiration from the way Colorado Avalanche forward Nathan MacKinnon barnstorms the net. Why not?

North America captain Connor McDavid is spectacularly talented, but not to the point where he can't pick up a tip or two from Philly centre Sean Couturier's work in the faceoff circle.

As ever, some secrets are tougher to crack than others.

It takes more than a month-long tournament to figure out the mechanics of Jack Eichel's wrist-shot release. Or take McDavid's preternatural ability to speed up seemingly without moving his feet – his propensity to suddenly create separation with players.

Scheifele, who has known McDavid for years and works out with him in the off-season, said it's a frequent topic of discussion among the members of the training group.

"We talk about it every day in the gym. We don't know how he glides faster than all of us skate," he laughed.

When it was put to Ryan Nugent-Hopkins, a teammate of McDavid in Edmonton, that the 19-year-old phenom leaves the most hard-bitten of old hockey hands shaking their heads at the way he gets around the ice, he said "they're not the only ones."

"Nobody knows how he does it," Nugent-Hopkins said. "It seems like he's got the perfect angles."

Some mysteries are fated to endure.

In truth, each player on the Team North America roster can lay claim to a skill all his own, or at least one aspect of the game he can execute to the envy of his teammates.

"You come out every day and it's 'oh my God, these guys are really all on the same team?' It's amazing to see the skill level among these guys," Scheifele marvelled.

And the players would be crazy not to seek ways to benefit from the situation.

World Cup: The intriguing talent from each of the eight teams competing in Toronto

McDavid, 19, is already a real threat to win the Art Ross Trophy next season as the league's top scorer after posting 48 points in 45 games as a rookie. Before that though comes the two-week tournament in Toronto where the Oilers star will show off his considerable skills against hockey's elite. Maybe most alluring is the prospect of the star from Newmarket, Ont., teaming up with other top youngsters such as Auston Matthews, Jack Eichel, Nathan MacKinnon and Johnny Gaudreau. North America might be the team to watch for that reason alone.

Tarasenko hasn't quite reached the Alex Ovechkin stratosphere of goal-scoring, but he's rapidly moving in that direction for the St. Louis Blues. The 24-year-old hit a career-high with 40 goals last season and his 77 goals over the past two campaigns trail only Ovechkin (103) and Tampa Bay Lightning captain Steven Stamkos (79). Tarasenko draws attention every time he steps on the ice. Like Ovechkin, he's an explosive scorer capable of creating something from nothing in an instant. Almost unnoticed as a member of Russia's disappointing 2014 Olympic squad (zero goals), Tarasenko is unlikely to go quietly on the big stage in Toronto.

Laine thought that he and not Matthews should've been the No. 1 overall pick of the 2016 draft, and at the World Cup he'll get his first chance to demonstrate why. An exuberant performer, Laine is coming off an unbelievable year that saw him thrive everywhere: from a championship-winning squad in the Finnish league, where he was playoff MVP, to a gold medal winner on home soil at the world junior championships, to the world championship in Russia, where Finland won silver. Laine only turned 18 in April, but he's already exceptionally confident, on and off the ice, and that makes him an especially enticing figure to watch.

No other defenceman in hockey today is quite like the captain of the Ottawa Senators. Karlsson can be mesmerizing to watch for his ability to dish the puck, move with it across the ice and scout possibilities before they emerge as obvious. Over the past five NHL seasons Karlsson has rung up 314 points, 76 more than the next closest defender, Nashville's P.K. Subban. Karlsson put up eight points in six games for Sweden at the 2014 Olympics. When good things are happening for the Swedes it's likely Karlsson is involved and that makes him a focal point for a squad that's a real threat to win.

One of only a handful of German players in the NHL, Draisaitl is easily the brightest young star suiting up for a veteran-laden Europe squad. His first full season for the Oilers was hugely promising, as the 20-year-old former No. 3 overall pick rung up 19 goals and 51 points, mostly in McDavid's shadow. Skilled with a sturdy six-foot-one frame, Draisaitl and has been compared to Los Angeles Kings captain Anze Kopitar and the two will get a chance to play alongside one another at the World Cup. The Europeans are rich with veterans such as Kopitar, Zdeno Chara and Marian Hossa, but short on excitable young talent. Draisaitl brings that element.

Seguin has only represented Canada once before on the international stage and that was at the worlds in 2015 when he scored nine goals in 10 games for the gold-medal winning squad. Coming off a frustrating end to the 2015-16 NHL season, which saw him injured for all but one game of the playoffs, Seguin is healthy now and ready to bring a flashy scoring element to the Canadian roster. His 107 goals over past three seasons tops even stars such as Crosby and Stamkos. Only injured Stars teammate Jamie Benn and Ducks winger Corey Perry (both at 110) have scored more among Canadian players.

Oshie took a star turn at the Olympics in Sochi when in the shootout he beat Russian goalie Sergei Bobrovsky four times on six shots in the U.S.'s 3-2 preliminary round win. The Mount Vernon, Wash., native is a rambunctious sort prone to drawing the ire of opponents and he has a knack for the back of the net, hitting a career-high with 26 goals for Washington last season. Oshie is a perfect representative of the Americans hard-nosed roster.

Save for the Flyers' Jakub Voracek, the Czech roster is lacking in excitable talent. Mrazek, the Red Wings No. 1 netminder, has the skills to change that. The 24-year-old was maybe the top goalie in the world over the first half of last season, compiling three shutouts and a .932 save percentage before stumbling in the second half. Goaltenders can drastically alter short tournaments such as the World Cup, with a single elimination semi-final, and Mrazek is just the type who could propel his country to unexpected heights. 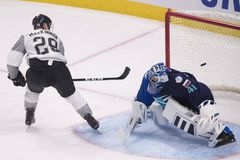 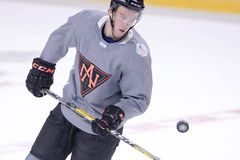 John Tavares takes a walk down memory lane ahead of World Cup
September 6, 2016 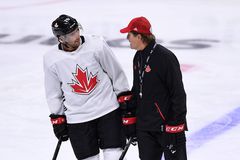