Every other year, Griffin and Sam Reinhart skated on the same teams in minor hockey.

Now, the brothers from West Vancouver hope to be teammates for Canada at the world junior championship.

Griffin, a 19-year-old defenceman for the Edmonton Oil Kings who was drafted fourth overall in 2012 by the New York Islanders, is a lock to make the squad even though he will be suspended for the first three preliminary round games due to a suspension incurred at last year's tournament in Ufa, Russia.

Sam, who is in contention to be picked first overall in the 2014 NHL draft, is battling for a spot on the 22-man squad.

Canada will be looking to end a four-year gold-medal drought at the world junior event, which begins Dec. 26 in Malmo, Sweden.

"It's exciting – it goes back to minor hockey," said 18-year-old Sam Reinhart, a centre for the Kootenay Ice. "It's nice to get back with him. The last couple of years, I've had to play against him and I don't like that very much."

They were on the ice together for some drills Friday, as Canada opened a three-day camp on the international-size rink at the MasterCard Centre for Hockey Excellence.

As expected, Jonathan Drouin was not on the ice.

The high-scoring Halifax Mooseheads forward is recovering from a concussion suffered in a QMJHL game last week. The 18-year-old is expected to recover in time for the tournament.

The third-overall pick by the Tampa Bay Lightning at the NHL draft in June was examined by team doctors last Thursday night. Canada head coach Brent Sutter expects Drouin to be ready to skate and described his condition as "status quo." He said it would not hinder the team's preparations for the tournament.

Griffin, Sam and 21-year-old Max Reinhart, a Calgary Flames prospect, are the sons of former NHL defenceman Paul Reinhart. All three started out as defencemen, but Sam and Max both ended up as centres.

Griffin, a towering rearguard at 6-foot-4, 212 pounds, and the 6-foot-1 Sam are looking to become the third brother duo to play for Canada at the world juniors (after Randy and Mike Moeller in 1982, and Freddie and Dougie Hamilton in 2012).

"It's always more fun playing with Sam than against him, so if he's able to make it as well it would be awesome for me," Griffin said.

The brothers embody two issues on the squad – Griffin's suspension and Sam being among three "underage" players in camp along with Erie Otters 16-year-old phenom Connor McDavid and Barrie Colts defenceman Aaron Ekblad, who is one of Sam Reinhart's main competitors for the No. 1 draft position.

Griffin was slapped with a four-game ban for a slash during Canada's semi-final loss to the United States in Ufa. He served one game after that, and is suspended for the next four IIHF sanctioned events he enters.

He will miss the first three group stage games in Malmo against Germany, the Czech Republic and Slovakia but will return for a Dec. 31 showdown with the Americans.

"I've definitely seen the schedule," he said. "I can't play the first three, but coming back to play the States on the 31st – that's a huge rivalry. Everyone in Canada gets hyped up for those games."

That Canada included him among the 25 camp invitees showed they value Reinhart's package of size, skill and leadership enough that missing three games doesn't faze them.

They are games Canada should win, and Sutter will still have six solid rearguards in the lineups. Reinhart will also be able to mesh with his teammates while playing in pretournament exhibition games next week against Finland, Sweden and Switzerland.

But he appreciates the confidence the Hockey Canada management showed in him. 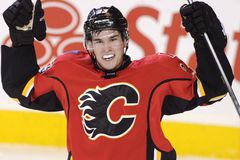 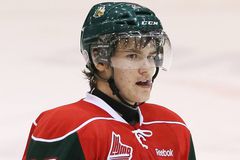 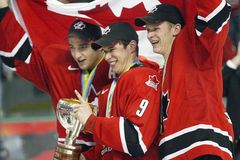