Canada doesn't have disappointments in hockey. It has provocations.

No country has provided more of those than Russia, and the Russians have rarely been as galling as they were in Monday night's gold-medal game.

At this same stage in 2011, they robbed Canada of its swagger during a humiliating three-goal collapse in Buffalo. It's one thing to embarrass us. It's especially cruel to do it in front of our friends.

For four years, the country nursed that grudge. It was a mission statement.

This Canadian junior team rose to it in alternately imperious and maddening style, rushing out in front and then threatening to blow an even bigger lead.

In the end, Canada won 5-4. After five years – an eternity in local terms – Canada is once again the world junior champion.

"We talked in the second intermission. If we'd been offered a one-goal lead going into the third in a gold-medal game, we'd have taken it … That was our luxury," said team captain Curtis Lazar.

If it was a luxury, it only seemed like that once it was over.

Beyond the rooting interests, this was a classic encounter. It was also momentarily this country's largest cardiac risk factor. If you plan on watching it again, please do so under medical supervision.

After 23 seconds, it was 1-0. Two minutes later, another goal – this one a mesmerizing pass tapestry by Canada's patchwork fourth line.

Almost immediately thereafter, Twitter went squirrelly. The social-media service has withstood Olympics and World Cups, as well as a few actual news events. We're not sure if Canada was responsible, but that's what we're all going to tell people.

The Russian goalie was pulled. Five minutes in, the Russians had moved directly to the cheap-shot stage of a blowout.

The Russians got one back, and then made a crucial error. After scoring, Dmitri Yudin slid by the Canadian bench, taunting and clutching at the crest on his sweater.

They may be the bear, but this was history's latest reminder that it's also a bad idea to poke the beaver.

In the first period, Canada survived hysteria. In the second, they survived history. They bent Russia to their will for seven minutes, and were up 5-1. The room began to exhale. There was a whiff of deserved smugness. Maybe a few people were beginning to feel sorry for Russia. Let that be a lesson in the future.

If there had been a knock on this Canadian roster, it was small moments of inattention. They'd suffered them against the U.S., and briefly against Slovakia.

Over three disastrous minutes, Canada gave up three goals – two on the power-play.

No one wanted to say "Buffalo," but every single person in the place was thinking it.

The ghosts of 2011 weren't fully exorcised until it ended. It was that fraught.

"This is a day we've all dreamt of for a long time," said defenceman Josh Morrissey. "It's been a while since we had gold in this program. Man, it feels pretty good."

How narcotic was this victory? It moved Stephen Harper to humour. The prime minister was in attendance in the not-so-cheap seats (standing room for this game was fetching $300 per on the re-sale market).

Like Harper, Russian leader Vladimir Putin is a noted hockey obsessive. Unlike Harper, he likes to pretend he can play.

During a first-period interview, Harper was asked if the sport often comes up during his professional travels.

"It does," Harper said happily. "I used to have chats with (Russian) prime minister (Dmitry) Medvedev. He's a great hockey fan. Really knows his game."

In diplomatic nomenclature, this is called 'a pantsing'.

Viewed from the safety of this morning, Canada dominated this tournament in every way, in every game. Over seven contests, they did not trail for a second. The only time they were tied was at 0-0, and never for long.

The top four scorers were Canadian. The team's 1A option in goal, Zach Fucale, was the tournament's steeliest netminder, and often without the benefit of regular work. His back-up allowed only three goals in two games.

This was a different sort of domination than their elders showed in Sochi. That was a function of suffocating patience. That version of Canada lured you in. This was pure exuberance. These teenagers went right at you. It was harder to bear, and a lot more fun to watch.

This team may match that level. It's not difficult to see players like Connor McDavid, Curtis Lazar, Anthony Duclair and Max Domi dominating at the next level. The best news of all is that here is the core of Canadian senior teams for a decade's worth of Olympics or World Cups.

Canada's finest moment in this tournament is still John Slaney's late goal against the Soviet Union in 1991, winning us our first world juniors on home soil.

But this game provided its steeliest. The two-minute Canadian penalty kill that began the third was the moment at which it very easily could all have gone wrong. Canada weathered that moment, and the rest of an impossibly nervy final period. Whatever you paid to see that game, it was both too much and not enough.

That's our perspective. Now, imagine theirs.

Like the one in 2005, this group was Herculean together. But only for a moment.

This tournament is largely populated with 18- and 19-year-olds that are in the midst of peaking. Most of them know it.

"I told the guys to really get caught in the moment," the unusually worldly Lazar said before puck drop. That phrase gets tossed around a lot, but nobody ever means it. Lazar meant it.

The Senators phenom is one of those who may still rise. For many of his Canadian teammates, this is the best it will ever get. On the ice, at least.

They have two weeks to be the kings of this country. This team ruthlessly embraced that opportunity.

That imbalance between Canadian skill and desperation and the rest of the world's relative lack of both is what makes this tournament so watchable.

It's the tension of what could also be lost – those long moments between the fourth Russian goal and the final horn – that made this more than a memorable victory.

For a country, this was one in a long list of hockey triumphs. For a few exceptional Canadian teenagers, it was the highest they will ever climb. 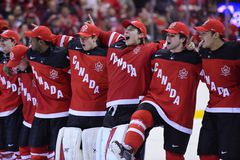 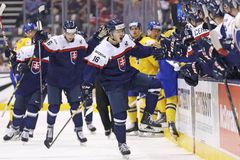 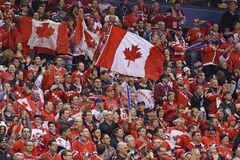 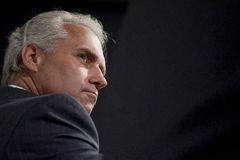