Canada will be down two forwards for Sunday's game against the U.S. at the world junior hockey championship because of another suspension.

JC Lipon must serve a one-game suspension handed down by the International Ice Hockey Federation on Saturday for his hit on Slovak forward Tomas Mikus on Friday.

Forward Boone Jenner will also serve the third in his three-game suspension imposed on the eve of the tournament for a check on a Swedish player during a pre-tournament game.

Both Canadians will be back in the lineup for the New Year's Eve game against Russia that concludes Pool B play.

The U.S. (1-1) will be a formidable opponent as they were narrowly beaten 2-1 by Russia in the preliminary round. Canada (2-0) will be forced to play a short bench of forwards against them.

"It leaves you hanging a little as a coach, but it's nothing that these kids aren't used to," Canadian head coach Steve Spott said Saturday at Ufa Arena.

"They all play big minutes with their club teams. These are 25-, 30-minute-a-night guys with their teams, so I think they'll like the ice time."

The latter is true. Lipon's reaction provided a window on the internal competition between the Canadian players to get on the ice more.

"Sitting out one game with the calibre of players here, other guys are going to step up and you've got to work your way back to getting ice time," he said.

The Kamloops Blazers forward also spoke of regaining Spott's trust in him as a player who isn't a liability on the ice.

"I've got to start from square one basically being the 13th forward, you've got to work your way back up," Lipon said. "That's what I've got to do."

The undrafted 19-year-old from Regina got his elbow high on Mikus and flattened him behind Slovakia's net in the first period of Canada's 6-3 win Friday.

Mikus lay face down while Lipon was slapped with a five-minute major and ejected from the game. The Slovak forward then scored a power-play goal on his next shift.

"None of us go down like that and embellish stuff," Lipon said. "If that's what you need to do to get a major around here, there's something wrong with that, I think."

The IIHF's disciplinary committee nevertheless chose to review the play and hold a hearing Saturday morning.

"The panel determined that although Lipon did not deliberately attempt to injure Mikus, his elbow to the head of Mikus was careless and dangerous, and the player has to be held accountable," the IIHF said in a statement.

Canada's top line of Ryan Nugent-Hopkins and wingers Mark Scheifele and Jonathan Huberdeau will likely stay intact against the Americans, although Spott says Scheifele may do double-duty centring another line.

Beyond those three, Spott expects to be mixing and matching his forwards versus the U.S. The Canadians aren't adverse to the extra ice time.

"I've said it all tournament and all camp, the depth of our forwards is the best part of our team and it gives a chance for lower-line guys to step up and prove they can take on those minutes," says fourth-line forward Ty Rattie.

Rattie's linemate Anthony Camara was also turfed from Friday's game with a major and a game misconduct for his check on Patrik Luka. The Slovak defenceman was taken off the ice on a stretcher and to hospital with what team officials said was a suspected concussion.

But the IIHF chose not to mete out further discipline for what Spott called a "great hockey hit."

While Canada's coach felt Lipon's transgression would have been a minor penalty in the Canadian Hockey League, Spott insists his players wake up to the fact that international officiating is different.

"We've preached it, we've spoken about it, but the players have to understand there are going to be consequences and a two-minute minor back home may be a suspension over here," he said.

Meanwhile, Jenner has practised and bided his time until his first game of the tournament Monday, which will be Canada's fourth.

The Oshawa General was suspended for a late hit on Swedish defenceman Jesper Pettersson, who suffered a broken wrist and dislocated shoulder.

"I'm going to be ready to go," the Columbus Blue Jackets prospect said. "I've been thinking about it a lot. Can't wait until that day." 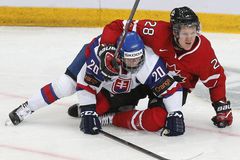 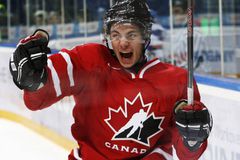 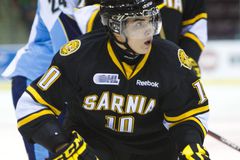 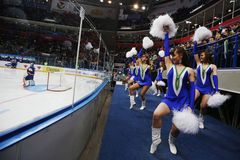 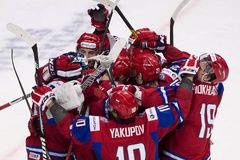 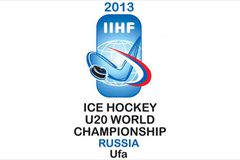