You know you're in hockey country when you run into a parade of 100 or so Santas – and most of them are carrying hockey sticks.

But this is a different "hockey country" – decidedly different.

Santa Claus in Russia is Ded Moroz, which translates to Grandfather Frost. He wears long, flowing red gowns and usually carries a staff – although in Ufa, most of the costumed participants chose hockey sticks this week in deference to the 2013 World Junior Hockey Championship being played at the local arenas.

Grandfather Frost is also often accompanied by his granddaughter, Snegurochka, the Snow Maiden; every one of them in this march down Lenin Street so stunningly different from, say, Punkinhead, that Ufa's wild traffic was even more chaotic and unpredictable than normal.

The streets are prairie wide – mercifully, as lanes mean nothing in either direction.

And this week they were howling with snow squalls as a deep freeze came down from the Ural Mountains and turned Ufa into a city roughly comparable to the crunching-snow freeze that struck Saskatoon during the 2010 WJHC.

But Ufa is far, far, far from Saskatoon, and not just in distance and time zones.

Here, the modern Russian Revolution has taken an industrial and oil city – actually a fortress ordered up by Ivan the Terrible that that dates back to 1574 – and transformed it into a garish display of consumerism and fashion.

But not much is normal in Ufa. A far more accurate description would be "over the top."

Take fashion, for example. It is not just the preponderance of fake fur and real fur, fake purses and real purses, but the remarkable number of women in stiletto-heeled boots who appear to have chosen attraction over traction as they cross the streets in front of the quickly advancing traffic. They hurry along, their treasured heels leaving marks like cross-country ski poles in the ice and blowing snow.

In the shivering cold of the hockey rinks, scantily clad cheerleaders, some two dozen of them, perform constantly during the games, seemingly blissfully unaware of the scores as well as the temperature.

There are enough Christmas lights along Karl Marx Street and Revolyutsionnaya Street to blind Canadian astronaut Chris Hadfield if he happens to look down from the Russian space station.

Were it not for the five-inch heels, the Christmas revelers, the overkill of lights and the traffic, it might be possible to confuse the scene with Canada.

Few Canadians could have expected this, as most Canadians had never heard of Ufa before this past week and, once they had, quickly concluded it was in the middle of nowhere.

It is not, of course. Ufa – accent on the second vowel, not the first – is sort of in the middle of Russia, or the middle of the Europe-Asia continent, if you prefer: southeast of Moscow, northwest of Kazakhstan, so many time zones away from Canada that rabid and NHL-starved hockey fans are suffering sleep deprivation just trying to catch a period or two of Team Canada's quest for the gold medal.

If they could be here, though, they might think at certain times that they had never left Canada – and it goes far beyond the deep freeze that has settled throughout Russia.

All around the rink boards at Ufa Arena are ads for the likes of Canadian Tire ("Canada's Hockey Store"), Telus, Air Canada, Purolator, RBC…

And high in the stands fans dressed completely in red unfurl a huge banner: "HOCKEY IS OUR GAME!" Only the flag painted beside it is not the red maple leaf, but the Russian flag.

For those who have come to believe only Canada has such passion for the winter game, they should come to Ufa, where the fans belt out their anthem, pound their thundersticks and rise in their seats with a roar as the home side bursts up the ice.

But they are fans of Team Russia, not Team Canada.

It would technically be wrong to call them all "Russian" fans, as Ufa, the capital of the Republic of Bashkortostan is home to more than a million citizens, more of them Bashkirs and Tatars than Russians.

But that the people of Ufa, of whatever background, love their hockey is undeniable. They say it is their No. 1 sport and are mad for the local club, Salavat Yulaev, which is considered one of the strongest teams in the Kontinental Hockey League and were champions in 2008 and 2011.

The team, curiously, is named after a revolutionary poet who was tortured and died in prison in 1800. He sits astride his horse at the city's main monument, his famous words listed below: "I am not dead yet, my Bashkirs!"

He was, of course, talking politics, not hockey. Any threat to life these days in Ufa involves cars far more than guns or torture – the streets separating the broad-shouldered, barrel-chested architecture of the old Soviet Union in places where the colour of lights means little and markings are mere suggestions quickly covered up by the snow and ice.

In some ways, says Team Canada forward Nathan MacKinnon, the action in the streets is not that much different from world junior hockey.

"It seems like there's no lanes and everybody's battling for position," says the precocious 17-year-old from Cole Harbour, N.S.

"It's pretty crazy," agrees his 17-year-old teammate on the Halifax Mooseheads, Jonathan Drouin.

It is that indeed.

Is the current world junior tournament format the best?
June 19, 2017
Slovakia the next test on the road to world junior gold
May 10, 2018 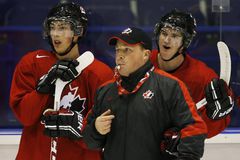 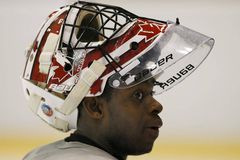 Canada takes necessary first step but progression must continue
May 10, 2018 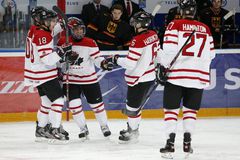