What should be the biggest world junior championship ever is set to begin with pressure weighing heavily on Canada to end a five-year gold medal drought.

The 11-day event to take place in Canada's two biggest cities, Toronto and Montreal, opens on Friday with the host country, led by 17-year-old top NHL draft prospect Connor McDavid, widely considered the favourite despite a string of disappointments since it's last victory in 2009.

"We've addressed (the pressure) for sure," Scott Salmond, Hockey Canada's vice-president for national teams, said this week. "We talked about what it means to play at home to make sure we're focused on the task at hand.

"But what I get from this group is a real level of excitement. We realize what type of team we are and how we want to play and we're excited by the opportunity. They say you play all year in your league for home ice advantage. We've got home ice advantage every game. So for us, it's less about pressure and more about enjoying it."

Canada opens group stage play at the Bell Centre on Dec. 26 against Slovakia, then faces Germany on Dec. 27, defending champion Finland on Dec. 29 and, in what is becoming a tradition, the United States on Dec. 31.

Group B teams Russia, Sweden, the Czech Republic, Denmark and Switzerland will play at the Air Canada Centre in Toronto.

Canada will move to Toronto for the single-game knockout rounds. The final is Jan. 5 at the ACC.

Hockey Canada, which hopes to beat the record $21 million in profits earned at the 2012 event in Calgary and Edmonton, secured rights to the 2015 and 2017 tournaments for Toronto and Montreal, charging steep ticket prices and looking for sellouts in the two NHL rinks.

In 2017, the settings will reverse, with Canada playing group stage games in Toronto and knockout games in Montreal.

Canadian dominance of the event, whose official name is the IIHF World Under-20 Championship, is no longer taken for granted. Canada won five years in a row twice, from 1993 to 1997 and from 2005 to 2009, but it is now a tougher tournament to win.

More countries have talent at least close to matching Canada, notably the U.S., Russia, Sweden and Finland, and some European teams no longer play the soft game that left them vulnerable to Canada's forechecking style.

And with the games played on the smaller NHL-size rinks, the Americans in particular will be gold medal contenders. The U.S. is led by Jack Eichel of Boston University, who is McDavid's rival for the honour of being picked first in the next NHL draft.

Signs that the tournament was getting harder to win were evident in Canada's 2009 victory, which needed Jordan Eberle's shootout goal to beat Russia 6-5 in the semifinals before downing Sweden 5-1 in the final.

The next year in Saskatoon, Eberle scored twice late in the third period to tie the U.S., only to see John Carlson win it in overtime for the Americans on a magnificent end-to-end rush.

Then came 2011 in Buffalo, when Canada led the final 3-0 after two periods only to see Russia storm back with five goals in the third.

Canada beat Finland for bronze in 2012, but came fourth in 2013 in Ufa, Russia and again last year in Malmo, Sweden. It was the first time Canada was shut out of the medals two years in a row since a three-year stretch from 1979 to 1981.

Disappointment was evident among fans and the Canadian hockey community.

Even McDavid was moved to say during the Canadian team's pre-tournament camp that "people are starting to doubt Canada and they don't really believe any more. It's annoying a little bit. You see how past people did and how great they were and everything like that. People just don't expect that of us anymore. They expect us to lose. That's just not how it should be for Canada."

Perhaps McDavid's "let's show 'em" approach can be a rallying point for this year's squad, the roots of which took shape when Canada sent its second youngest team ever to Malmo.

Seven players are back for a second shot at gold, including McDavid, goalie Zach Fucale, defenceman Josh Morrissey and forwards Nic Petan, Frederik Gauthier, Sam Reinhart and Curtis Lazar. While last year's squad was heavy on 18-year-olds, this one has 16 players who are 19.

Salmond denied the Malmo tournament was merely a training ground for the glitzier event in Toronto and Montreal.

"It may look that way, but it wasn't," he said. "That staff picked what we felt was the best group to give us a chance to win then.

"Sure it has helped us this year because of the number of players we have back. But it wasn't by design."

Canada tried to select a stronger offensive roster this time, eschewing players only there to check. Rather, they picked talent to give them scoring depth on all four lines.

Canada could have been even stronger had Aaron Ekblad, Jonathan Drouin, Bo Horvat and Nathan MacKinnon been released by their NHL clubs, but it is no longer the only country missing players. For one, Washington refused to loan 19-year-old Andre Burakovsky to Sweden.

But help came for Canada when the New York Rangers loaned sniper Anthony Duclair and the Ottawa Senators provided Lazar, who was named the team's captain.

"I like the fact that we're an older group," said Ryan Jankowski, Canada's director of player personnel. "We've got skill throughout the lineup.

"Of course you'd love to have MacKinnon, Horvat or Drouin, but I like the group we have. We have a nice balance throughout our 20 skaters."

A highlight of this year's event will be the showcase for McDavid and Eichel.

Many consider McDavid, who makes dazzling plays at top speed, the best prospect since Sidney Crosby in 2005. Eichel is a dynamic speedster who also played at last year's world juniors. 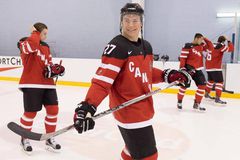 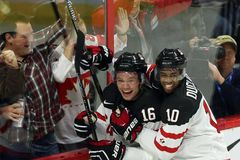 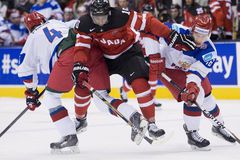 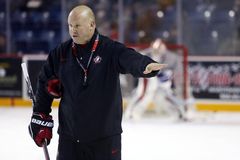