Their words, remember. Forget for the moment that these are teenagers playing a child's game and forget even that, as one of the best of them, Mark Scheifele so perfectly put it, "It's a new day tomorrow."

This was today, and it stung.

Team Canada had gone into the tournament expecting to challenge for a gold medal – and were left in the end with only a golden opportunity that they could not seize despite almost every imaginable effort.

The bronze medal at the 2013 World Junior Hockey Championship went to Russia, after Valeri Nichushkin bulled his way through the Canadian defence and scored 1:35 into overtime.

There was added sting to the loss in that Nichushkin had been the Russian player who splatted Tyler Wotherspoon into the boards from behind when Canada defeated Russia in the preliminary round.

Nichushkin had been suspended a game for his transgression; unfortunately for Canada, it wasn't this game.

There had been, for the Canadians, a chance for redemption Saturday afternoon in Ufa, an opportunity to erase the memory of the pure stinker of a game they had served up in the Thursday semifinal when they fell 5-1 to a USA team they had defeated only days earlier in the earlier round.

All Canadians know that the greatest games always end 6-5 – as happened in the '72 Summit Series and the 1987 Canada Cup – and this was no different.

Only it was not the 6-5 score they had so wanted to see when overtime began.

If this 6-5 game joins the truly greats, however, let it be in the pond-hockey division.

The game match played, for the most part, is if the coaches had all been fired and sent home in shame, having failed to meet their countries' impossible demands for "gold or nothing."

The young Canadians and Russians, since they had the ice time, held a shinny match: a wild, unstructured, exhausting pond-hockey to determine who would stand as the third best junior hockey team in the world.

And in the end it was the freelancing, risk-taking, mistake-making Russians – led by the two-goal performance of captain Nail Yakupov – who made the most of the opportunity presented both pre-tournament favourites to come away with something, if it could not be gold.

For Canada, this sixth game of the tournament marked the first start in net for backup Jordan Binnington, who had replaced No. 1 goaltender Malcolm Subban late in the 5-1 loss in the semi-final match to the United States.

It was unfortunately inauspicious. The Russians scored on only their second shot, when Alexander Khokhlchyov fired a low shot at Binnington that inexplicably leaked through his pad and trickled into the net.

They scored on their third shot when, on the power play, captain Nail Yakupov was fed a perfect cross-crease pass and pounded the puck into the empty side.

Ryan Nugent-Hopkins, the Canadian captain and scoring leader, got his game going again after a listless outing against USA when he fired a hard wrist shot past Russian goaltender Andrei Makarov on a Canadian power play.

Russia took it to 3-1 when Kirill Dyakov scored on a hard point shot that eluded Binnington, whose game had lasted all of 7:54 when Canadian coach Steve Spott called him to the bench and sent out Subban to finish out the match.

"We had to make a tough decision," said Canadian head coach Steve Spott. "The change had to be made."

With the Russians pressing to put the game out of reach, Subban made several excellent saves, some purely on instinct as he could not possibly have seen the shots ripping through heavy traffic in front of his crease.

Nugent-Hopkins was again the catalyst as Canada drew back to within a goal when Jonathan Huberdeau – having his first strong game of the tournament – scored on the power play.

Canada's power play luck held again when Scheifele still managed to get away a shot that beat Makarov.

Russia regained the lead at 4-3 when Yevgeni Mozer finally put a Russian puck past Subban on an even-man rush. But Canada soon tied the game again when Ryan Murphy scored from the point on yet another power play. Again, Nugent-Hopkins was the set-up man on the play.

Spott went out of his way to praise the play and leadership of Nugent-Hopkins, the young Edmonton Oilers star who was available only because of the Lockout.

"He was everything as advertised," said Spott.

Finally, the Russians were able to capitalize on a power play when, early in the third, Yakupov was again the recipient of a perfect cross-crease pass and was able to clip the puck high over a falling Subban.

Canada again tied the game, taking it to 5-5 halfway through the third period when Brett Ritchie was able to beat Makarov following a goalmouth scramble.

Both teams played shy in the dying moments, each counting on four-on-four overtime to settle the matter. The Russians took control almost immediately in the extra 10 minutes, controlling the puck and attacking in waves. Finally, let by Nichushkin's hard drive up right wing, after which he forced his way into the front of the net, the puck was in behind Subban and the bronze medal was decided.

For the Canadians, it was fourth place…no consolation at all for the players and coaches.

Ryan Strome could not believe the pace and scoring of the game. "It was 'Bang! Bang! Bang!'" he said. "[But] I felt like we did a lot of things right. Play with pride. Play like Canadians.

"It's unacceptable not to win a medal, but we've got to be proud of our effort. No one cares more. It's just tough to come here and lose."

"We showed lots of character to get back in it," added Scheifele. But he, too, said it was "unacceptable – we had a great team here.

"We're definitely disappointed in ourselves."

Spott said that the Canadian junior team should have high expectations – "a medal ever year" – but that he, too, was "disappointed.

Spott said that the coaches and players fully expect that there will be questions and they will all have to deal with them in the days to come.

Canada was playing without defenceman Griffin Reinhardt, suspended four games by the IIHF for a deliberate hit to the head during Canada's 5-1 loss to the United States in the semifinal.

While the suspension was bitterly contested on Twitter and in various Canadian media, the IIHF held a special session Saturday to show the hit at various speeds and then, as Brendan Shanahan has dealt with NHL suspensions, rules official Dan Marouelli, a former NHL referee, walked the gathered media through the hit and explained how it was deemed "to be a careless and reckless act."

"Our goal is player safety," adder IIHF president Rene Fasil. "We do everything possible to have our players play safely."

Reinhardt must sit out three IIHF-sanctioned games in the future, as well. 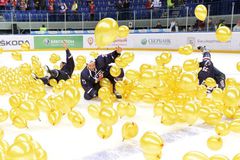 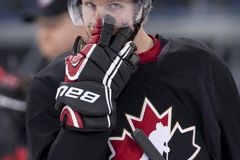 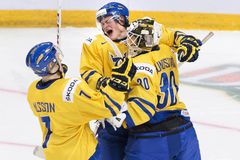 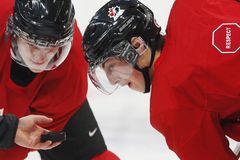 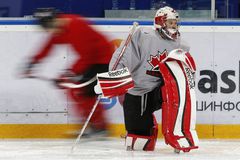 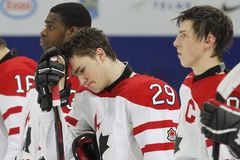