Zach Fucale's teammates on Canada's world junior team can tell when he's comfortable between the pipes. They can hear it.

Fucale has the kind of relaxed personality that makes him well-suited for a goaltending competition with Eric Comrie ahead of the world junior championships. But it's also a good attitude to have after reports surfaced that the 19-year-old will be traded from the Quebec Major Junior Hockey League's Halifax Mooseheads to the Quebec Remparts once the tournament is over.

"I can't control those things, what's happening back there," the Rosemere, Que., native said Wednesday. "I'm right here, right now with Team Canada and I'm with a great group of guys, great staff here. I'm not worried about that and I'm just focused on helping this team."

Fucale and Comrie were the only goaltenders Hockey Canada brought to its world junior selection camp this week, and coach Benoit Groulx has called it an open competition between them. Somehow that hasn't bothered Fucale, even though he was the No. 1 goalie on last year's team.

"Me and Coms, we have the same goal in mind and that's to win," Fucale said. "Whoever's in there, we're going to help the team win as much as we can, and that's all we can do. I feel comfortable in the net and so does Coms."

Groulx, who coaches the Gatineau Olympiques of the QMJHL, said he likes Fucale's competitiveness. Groulx noted Fucale played 58 games as a 16-year-old and then helped Halifax win the 2013 Memorial Cup.

"He's been through many big games in his career," Groulx said. "I think that he carries that confidence with him. He competes hard."

Fucale will start in goal for Canada on Friday night in its first international game, an exhibition against Russia at Air Canada Centre in Toronto. That's a nod to his past success and his status as the front-runner in the goalie competition.

In 24 QMJHL games this season, Fucale is 13-11 with a 3.20 goals-against average and .890 save percentage. But those numbers are due in part to the Mooseheads' rebuilding group.

"There's a lot of things that influence stats and a lot of things happen. I'm not worried about it," Fucale said. "I know, my teammates know and my goalie coach and I have been working hard. I feel I'm doing very good things on and off the ice. Those things will pay off."

Groulx pointed to Halifax's bad start and a barrage of injuries as reasons for Fucale's numbers dropping off. He also knows another season in the same junior league can take a toll.

"When it's your fourth year in the league and you've been playing with three solid teams and then you've to come back for a fourth one, sometimes it's tough to start the engine," Groulx said. "But I thought he got better in November. He had an outstanding game against Russia at the Subway Series. I think he feels good about himself now. He's mentally ready. That's what he's showing us on the ice."

Fucale brushed off talk about being traded, reports that came out of Quebec on Wednesday. He can't officially be sent to the Remparts, who are loading up for a Memorial Cup run, until January when the world junior tournament is over.

That allows him to put trade talk aside for now.

"I'm not focused on that," Fucale said. "I can't control what goes on over there. I'm just concentrating on helping this team win."

Groulx wants Fucale to be himself in net, especially if that means chirping to stay on his game. One thing he's not worried about is the trade distracting Fucale.

"With the experience he's got, I don't think he'll look further ahead," Groulx said. "If that part is true, he's going to the Memorial Cup again. It's not a bad thing for him. I really feel that right now I don't see anyone here having his focus anywhere else than with this team."

Note — Groulx said McDavid, forward Nic Petan and defenceman Joe Hicketts would not play against Russia. That's an indication their spots on the 22-man roster are safe. 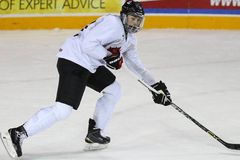 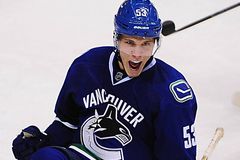 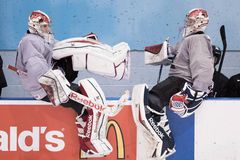