Dave Hodge may be in limbo at TSN after last week's cancellation of his long-running show, The Reporters, but he is not ready to call it a career.

Those close to Hodge, 72, say the Canadian broadcasting legend still has some time left on his contract with TSN and plans to meet with management to discuss his future at the network. If nothing is offered, or nothing that interests him, Hodge will look for other opportunities, even those outside broadcasting.

Retirement is definitely not in the plans for one of the most well-known sports broadcasters in the country. Hodge became nationally famous at the age of 26 in 1971 when he became the host of Hockey Night In Canada. He lasted 16 years as the face of Saturday night for Canadians until he expressed his anger on-air about the network switching away from a game, which just went into overtime, to the news. After his firing by the CBC, Hodge called CFL games among other things before joining TSN in 1992.

When contacted by The Globe and Mail, Hodge declined to discuss the cancellation of The Reporters, which started its 17th season a couple of months ago, or his plans because he has yet to discuss them with TSN.

"[Hodge] is still under contract and we are working together to discuss possible future content ideas," Mark Milliere, senior vice-president and general manager of TSN, said in an e-mail.

In a career that spans nearly 50 years, Hodge is famous for sticking to his principles and for never hesitating to express them. That is essentially why The Reporters, a Sunday-morning panel show that debated the big sports issues of the week, came to an end.

Broadcasting insiders say Hodge grew increasingly unhappy with a series of budget cuts to the show that he felt compromised its quality. The situation came to a head last week in the wake of the latest round of cuts, which began in September, when Montreal journalist Michael Farber, a long-time panelist on the show, was dropped.

Hodge resigned as host of The Reporters and TSN quickly cancelled the show. While the show probably would have stayed on the air if Hodge had not resigned, he decided he could no longer stomach working on a show that, in his eyes, was a shadow of its original incarnation.

However, Hodge is not blaming TSN management for the show's demise. He is said to feel it is more a result of the state of the broadcast industry, which has been fighting declining viewership and advertising revenue for years.

The trouble started last year when the show switched to Monday afternoons from Sunday mornings. Then, for the first time since it started in 2002 running 52 weeks a year, The Reporters, took a hiatus this past July and August as a cost-cutting measure. When the show resumed in September, it was switched back to Sunday mornings but Hodge's unhappiness increased.

Farber, who was flown in from Montreal every Sunday to do the show in TSN's Toronto studios, was the next victim of the budget cuts, leaving Steve Simmons and Bruce Arthur, sports columnists for the Toronto Sun and Toronto Star respectively, as the only panelists. Hodge was deeply unhappy about the loss of Farber and made that clear on the first show without him, telling the viewers it was a cost-cutting move that would not help the show.

Along with the move back to Sundays, the show was moved to TSN's radio studio to save money on the technical staff. The radio studio has cameras that do not require operators. The show was now on TSN's radio network and simulcast on television but it was plagued by technical problems. Typical of those problems was the first segment of the final show last week when both Simmons and Arthur had no audio on their microphones for 11 minutes.

While last week's trouble was not the final straw for Hodge, the culmination of all the technical issues, plus the loss of Farber, convinced him he could not continue as host. His chief regret, those close to him say, is that there was no chance for a fitting finale for a show he came to love.

Hodge's only public comments about leaving the show were on Twitter: "The end has come for TSN/The Reporters (2002-2017). 'Thumbs up' to all who contributed, and to our loyal and passionate viewers."

There was a large Twitter outpouring of affection and regret for the loss of The Reporters, which prompted Hodge to post a response: "There are days when I don't love Twitter. This wasn't one of them. Heartwarming, to say the least, to hear from so many nice people. Thanks!" 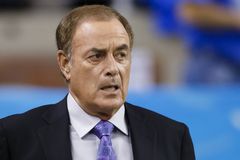 NHL ratings boost gives Rogers Media something to smile about
June 14, 2017
Follow David Shoalts on Twitter @dshoalts
Report an error Editorial code of conduct
Due to technical reasons, we have temporarily removed commenting from our articles. We hope to have this fixed soon. Thank you for your patience. If you are looking to give feedback on our new site, please send it along to feedback@globeandmail.com. If you want to write a letter to the editor, please forward to letters@globeandmail.com.
Comments