A photo making the rounds on social media on Friday shows tennis legend Rafael Nadal next to a knobby-kneed Canadian boy who barely makes it up to the Spaniard's chest. It was 2008. The boy was a star-struck 9-year-old from Ontario named Denis Shapovalov.

By Friday, that boy had vaulted above his idol's shoulders.

Seemingly overnight, Shapovalov secured a spot in Canadian sports history as the teen from Richmond Hill who went up against a tennis titan and didn't flinch. The world No. 143 beat the world No. 2. Denis "the Tennis Menace" was born. The 18-year-old's victory at the Rogers Cup in the Round of 16 wowed the tennis world (sample international headline: "Nadal upset by Canadian teenager"). Even Shapovalov's coach seemed a little stunned when the nearly three-hour battle on Centre Court was over.

"It's a bit surreal to be able to – start to finish – last that long, and produce quality tennis, go toe-to-toe with a legend like that," his coach, Martin Laurendeau, said at a news conference at Montreal's Uniprix Stadium. "It's just remarkable."

Shapovalov's magic continued on Friday as he overcame a lacklustre opening set to defeat France's Adrian Mannarino 2-6, 6-3, 6-4 to advance to Saturday's semi-final against either Alexander Zverev or Kevin Anderson, who were facing off in the late game.

Shapovalov's historic run in Montreal makes him the youngest Masters series quarter– and semi-finalist in tennis history, and has earned him a spot in the constellation of the sport's rising Canadian stars.

To admirers, he offers a form of fearlessness that kept his nerves steady on Thursday after a first-set loss to Nadal, and again on Friday when facing Mannarino. His all-or-nothing approach, highlighted by nine aces and seven double faults, paid off against the conservative Mannarino, whose consistent, but light-hitting, game was in the end no match for Shapovalov's riskier ways. Tied 4-4 in the third set, Shapovalov converted a crucial break point, allowing him to serve for the match.

"He revels in that kind of an atmosphere," Laurendeau said. "He's like a fish in water when you put him on a big court against a big player. I don't know if you can teach that. But he has that, and he's making the most of it."

Shapovalov served notice last summer when he won Junior Wimbledon – something Roger Federer had also done as a teen. Since then, he's had some notable wins earned as a wild-card at ATP events, beating No. 19 Nick Kyrgios at the 2016 Rogers Cup in Toronto and No. 47 Kyle Edmond at Queen's Club.

He also had a brush with infamy, and for a while was known as the kid who whacked a ball in frustration during a Davis Cup match in February and hit a chair umpire in the eye. The umpire, Arnaud Gabas, required surgery to repair a fractured bone. That outburst earned Shapovalov a $7,000 fine, and it cost Canada the match and a shot at beating Britain.

"I did a very stupid thing and I'm really embarrassed and ashamed," a contrite Shapovalov said at the time.

"I went into complete shock after I hit it. The worst part was I had no idea how badly I may have hurt him. I've never hurt a single person in my whole life – never even wanted to hurt someone. That was so unprofessional of me. It was such a fluke accident. I promise I am going to mature from it and learn from it."

That display of hot-hotheadedness appears to be behind him. This week at the Rogers Cup, he'd won over not just Wayne Gretzky and Penny Oleksiak, who watched him in the stands in Montreal, but regular fans who gave him a standing ovation.

Gretzky, the hockey great, gave Shapovalov his stamp of approval.

"The great athletes want to be at centre stage. They want to play out here and be under that microscope," Gretzky said during a TV interview earlier in the week. "I think he has ice in his veins and I think he's one of those guys who's going to love the pressure and take on that responsibility."

Another "Great One" also endorsed the lefty's skills and potential. Federer, widely considered the greatest tennis player in history, had praise for the teen's game, observing that the Canadian seemed to have "an extra gear," while predicting a bright future for Shapovalov.

"I like his game. I think he's going to be a wonderful player. Seems to have a good attitude, too," Federer said on Friday, after he downed the 12th-ranked Roberto Bautista-Agut in straight sets to advance to the semi-final. "It was a joy to watch."

The Canadian "kept moving forward, hitting the ball hard." Nadal, Federer added, "will never give away a match."

It's too soon to say whether the country is witnessing the start of Shapo-mania. Canada has been here before with its tennis darlings. Milos Raonic, currently No. 6 in the world, didn't make his first Grand Slam appearance until he was 20, and didn't crack the top 100 until he was 21. Raonic, who peaked at No. 3 at the end of last season, bowed out in the second round this week.

Perhaps a more cautionary tale is that of Eugenie Bouchard. Bouchard, who climbed as high as the No. 5 ranking on the WTA Tour, has tumbled all the way to No. 70. Though she's still only 23 years old, it serves as a reminder that fast success is not always sustained.

Still, when the teen rolled up in a golf cart for a late-afternoon practice in Montreal on Friday, a sizable crowd gathered to watch him and hope for a chance at an autograph. Shapovalov seemed relaxed as he stepped onto the court under a blazing sun, gave his mother, Tessa, a hug and started hitting. His mother, a former professional player in the Soviet Union who runs a tennis academy in Vaughan, Ont., helped develop her son's talent.

Shapovalov may be living his moment in the sun in Montreal, but what's next? Last year, he was crowned Junior Wimbledon champion. This week, he began his run in Montreal with a breakthrough victory over 2009 U.S. Open champion Juan Martin del Potro, before ending up the youngest player to advance to the tournament's final eight since Bjorn Borg in 1974.

Now he is expected to break into the top 100 after the Montreal tournament.

His coach is looking at the long term.

"He's come a long way. He's got the results to prove it."

With a report from Jamie Ross 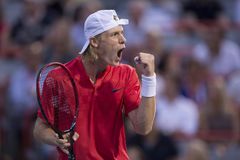 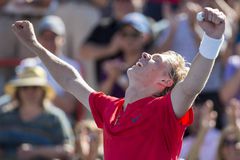 Denis Shapovalov beats Dutra Silva to advance to Rogers Cup second round
August 8, 2017
Follow Ingrid Peritz on Twitter @iperitz
Report an error Editorial code of conduct
Due to technical reasons, we have temporarily removed commenting from our articles. We hope to have this fixed soon. Thank you for your patience. If you are looking to give feedback on our new site, please send it along to feedback@globeandmail.com. If you want to write a letter to the editor, please forward to letters@globeandmail.com.
Comments