The television rights fees paid to the Toronto Blue Jays from parent company Rogers Communications Inc., have fallen behind the skyrocketing regional TV revenues being earned by some teams in the United States.

Major-league teams are reaping new deals from regional television networks for as much as $150-million annually, and they are leveraging the windfalls to bring in premium talent. In contrast, sources say the Blue Jays earn approximately $225,000 a game in television rights fees, or a total of $36-million for 162 games from Rogers Sportsnet, a cable sports network also owned by Rogers Communications.

The Greater Toronto market is the seventh largest in major-league baseball. However, under MLB criteria, all of Canada is protected Blue Jays territory, and on that basis Toronto arguably plays in the largest market by population and territory. The Sportsnet contract with the Jays covers all of its regional stations, and Jays games are broadcast nationally.

In their heyday in the late 1980s and early 1990s, the Blue Jays often had the highest payroll in baseball. As the Blue Jays assemble for spring training in Dunedin, Fla., the team's payroll is ranked bottom third of 30 teams. Of teams operating in the 10 biggest baseball markets, Toronto's payroll ranks second last with Washington's – only the rebuilding Houston Astros' is lower.

"I'm not commenting," club CEO Paul Beeston said. "You go look it up. And how do you measure it? I tell you what, you're off on all of this stuff. None of it makes any sense."

However, payroll increases by other teams are being financed by the television deals rather than attendance.

Fox Sports Southwest and the Texas Rangers signed a deal in 2010 valued at $3-billion for 20 years, or an average $150-million (U.S.) a season. The Los Angeles Angels of Anaheim, inked a similar 20-year deal with Fox estimated to be worth even more. The Los Angeles Dodgers, currently for sale, are expected to reap a regional TV package for at least twice the estimated $1.5-billion purchase price of the club. Even the sad-sack San Diego Padres are reportedly getting a 20-year deal for as much as $1.5-billion with Comcast, or $75-million a season.

The Angels signed prize free agent Albert Pujols to a back-loaded 10-year/$240-million contract this winter, and pitcher C.J. Wilson to a five-year/$77.5-million deal. The Rangers submitted a $51.7-million posting bid for Japanese pitcher Yu Darvish – in whom the Jays were purportedly interested – and signed him to a guaranteed $56-million deal. The Detroit Tigers signed Prince Fielder to a nine-year/$214-million deal with the Detroit Tigers, in anticipation of multiplying the current rights fee of $40-million when the deal expires in 2018.

The Jays also showed interest in shortstop Jose Reyes, who will be paid $102-million over six years by the Miami Marlins (playing on natural grass rather than the Rogers Centre's artificial turf is said to have factored into his decision). Toronto's primary acquisition this winter, relief pitcher Sergio Santos, came via trade with the Chicago White Sox. He has a three-year, $8.25-million contract.

"The local TV money has changed the entire landscape," Ed Goren, vice-chairman of Fox Sports media group, told USA Today. "There are a lot of teams that can play with the big boys now and write those big cheques."

Why would Sportsnet pay more to the Jays for television rights? In theory, by helping the team boost payroll to become more competitive, ratings, attendance and merchandise sales would all increase. As it is, in terms of player salaries, the Blue Jays are not playing with "the big boys," in the American League East division. The New York Yankees ($210-million payroll) and the Boston Red Sox ($170-million payroll) dwarf Toronto's $84.1-million.

Scott Moore of Sportsnet is currently negotiating an extension of the television deal with Beeston. There is little evidence from Rogers to suggest that Canada's baseball team is about to ride the TV rights updraft benefiting U.S. teams.

Asked to confirm the $225,000 figure, Beeston said: "I don't have to say whether it's accurate or not. But I don't understand where [The Globe]comes up with the number.

"The only thing that matters and should matter is what kind of team we put on the field and what type of dollars we have to build our organization. The last time I looked we had the dollars necessary to build a team."

Beeston added that the Blue Jays are "spending more money than anybody in the amateur draft and in the international draft. I can see absolutely no reason why the rest of it has any relevance."

In the age of PVR, baseball delivers one of the few appointment viewing opportunities left to networks. U.S. regional networks are competing fiercely for the guarantee of 162-game schedules and loyal six-month audiences.

But there is speculation about Rogers's appetite for investing in the Blue Jays, after the company joined with BCE Inc., in December to acquire 75 per cent of Maple Leaf Sports and Entertainment, for $1.32-billion. What's left for the Jays?

A publicly traded company, Rogers may choose a price point to make one branch appear more or less profitable for tax or regulatory purposes. Spending another $25-million doesn't really move the dial for Toronto, relative to the Red Sox and Yankees. Given these conditions, the Blue Jays need to spend smarter and luckier, not more for the sake of more.

"I believe they are willing to do so if they see a good chance of getting into postseason," says Greg MacDonald of Macquarie Securities. "They have the privilege of not being pressured – unlike those who operate in the more fragmented U.S. market.

"My view is that they will spend more over time to make Jays a more consistent contender, but after all is said and done raising the Leafs to that position is a much more important objective. Finally, the reason I am confident in their intentions for these teams to be winners is that the digital rights [as much or more than TV rights because of the exclusive distribution option]are important to protect their future carrier cash flows – and playoff contenders can drive a lot of eyeballs to wireless broadband."

Because of revenue-sharing arrangements among MLB teams, MLB employs a firm in Denver, Bortz Media and Sports Group, to conduct assessments of markets to monitor TV rights values. According to sources, the Blue Jays roughly adhere to the formula provided by MLB in its TV payments to the club. (The new collective agreement between MLB and the MLB Players Association will disqualify a market such as the Blue Jays from revenue sharing entirely by 2016, however, they will still pay in.) The pressure from the new deals in other MLB cities will also push payrolls higher. If they fall further behind their MLB competition in TV rights revenue, the Blue Jays will need to go to their corporate owners on a per-occasion basis to sign a superstar such as Jose Bautista or Roy Halladay. Rogers has said it would consider such one-off contracts but appears reluctant to permanently bump the club's payroll level to a higher threshold.

The Globe contacted Rogers to discuss the relationship between the club and its network but a spokesperson replied, "We're respectfully declining [on] this one as the details regarding our rights negotiations and deals are confidential, and we don't speak publicly about this." Similarly, an MLB spokesman declined comment on deals with regional sports networks.

It should be noted that many MLB teams own all or a part of the network that broadcasts their games. The Yankees currently own about 30 per cent of the YES Network while the Red Sox own 80 per cent of the New England Sports Network. Market competition still guarantees those teams a windfall on their rights, while there is no competition for the Jays rights.

Forbes magazine placed the Blue Jays 27th on their 2011 list of team values in MLB, behind much smaller markets such as Kansas City, Milwaukee and Cincinnati and in a gloomy observation last year noted, "The Blue Jays are starting to resemble the Montreal Expos..."

With reports from Jeff Blair, Robert MacLeod and Steve Ladurantaye 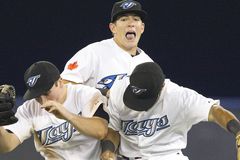 Blue Jays complete Francisco Cordero signing
February 1, 2012
Follow us on Twitter @globe_sports Opens in a new window
Report an error Editorial code of conduct
Due to technical reasons, we have temporarily removed commenting from our articles. We hope to have this fixed soon. Thank you for your patience. If you are looking to give feedback on our new site, please send it along to feedback@globeandmail.com. If you want to write a letter to the editor, please forward to letters@globeandmail.com.
Comments