While his schoolmates plowed through the Grade 11 syllabus, Andrew Mullen spent three weeks in bed listening to J.R.R. Tolkien audio books. When he finally returned to the classroom, he left after 20 minutes to lie down.

Mullen's problems stemmed from a body check he didn't see coming. But the 6-foot-2 hockey defenceman was lucky: his school in Toronto is one of a handful in Canada with a formal system to help student-athletes reintegrate academically after concussion.

Brain-injury experts say mental rest is as important as physical rest when it comes to recovering from concussions. Studying for an exam, tackling equations, and keeping notes puts stress on the brain that can "increase symptoms and potentially throw off the recovery curve," says Michael Hutchison, director of the concussion program at the University of Toronto's David L. MacIntosh Sport Medicine Clinic.

Yet, as parents, leagues and governments grapple with how to manage brain injuries in school athletics, most of the emphasis is on how and when young athletes can return to sport. It's a frustrating irony, since student-athletes will spend most of their recovery in the classroom, not the playing field, says Gerard Gioia, a pediatric neuropsychologist at George Washington University who has testified before the U.S. Congress on the need for better academic concussion protocols in schools.

"We just have not connected the dots enough. I do believe that there is an increasing awareness but I think it falls far short, and schools don't know what to do about it. They don't know how to implement a plan and a program."

The Return to Learn program at St. Michael's College School offers a window into how it might be done. Concussions are a familiar problem at the all-boys private Catholic school in downtown Toronto.

The school has funnelled about 50 athletes into the NHL and dozens of others to university teams. About half of the 1,100 students in Grades 7 through 12 play organized sports. Of those, 90 suffered concussions last year.

They included Mullen, a former Junior A hockey player and Under-19 Team Canada lacrosse player with NCAA college scholarships on the line. After a trip to the doctor, Mullen met with Barbara Csenge, the school's director of learning enrichment. It was Csenge who came up with the idea for Return to Learn after she noticed students were coming to school with headaches, looking dazed – brain injury symptoms she recognized from her previous job as a community liaison at a children's rehabilitation hospital in Toronto.

In consultation with medical professionals at the University of Toronto, Csenge came up with a six-step program. It starts with full bed rest at home, gradually adding light academic activities, trial school attendance, and slowly adding assignments and extracurricular classes such as music, until finally the students are back into their regular load.

Csenge's main role is to be a liaison among doctors, parents, students and teachers. She asks teachers which tests and assignments are mandatory, and which can be skipped. "There's a power imbalance that's just inherent in the student-teacher relationship. And it's really hard, when someone's sick as well, to say: oh, can you help me out?"

For the students such as Simon Chang, who suffered a concussion during football practice last May, having an advocate was key. "I know there was probably a few teachers here who thought I was pretending," the Grade 12 student said. He was forced to missed six final exams because of his injury, but his teachers agreed to grade him based on the marks he had going into finals. He has since caught up in every class but math.

(Cases such as Chang and Mullen are extreme, Csenge says. Ninety per cent of students are back within a week or so.)

Now in its second year, the Return to Learn program is evolving. Fairness is a theme that comes up often, as some teachers have struggled to figure out how to grade an injured student who isn't able to complete the same number of assignments as his peers, said the school's principal, Terry Sheridan. Unlike last year, exams will be mandatory for a passing grade; however, students can take them in the summer break, if necessary.

As well, every student was given baseline testing this September, which will help clinicians who see the students assess the severity of the brain injury, and how the students' injury is proceeding.

Compared to most schools, St. Michael's has many advantages: an entrenched sports culture, a learning centre devoted to helping students with special needs, and the type of resources that come with $16,000 annual tuition.

But schools may not have a choice. Last March, a bill was introduced in Ontario that would put the onus on schools to ensure the needs of students who sustain concussions are met in the classroom. Ontario is an exception in Canada; B.C. is the only other province considering concussion legislation in schools, and that bill only focuses on the playing field. In the United States, legislation is being considered that would make such protocols mandatory nationwide.

It could take years for such laws to be passed and implemented, and in the meantime, school boards such as the Toronto District School Board, which approved new concussion policies last year, are slowly moving ahead on their own.

Gioia – a major contributing author in educational materials distributed by the Centre for Disease Control to schools and parents – says he's confident that all schools can get there.

"I'm not at all delusional to think that you can snap your fingers and make it happen, but I do think that most schools are set up with a set of folks – nurses, guidance counsellors, special-education teachers, even athletic trainers – that can really help put those supports in place, and then track that youngster with their symptoms."

The alternative, he says, isn't good. About 90 per cent of his clinical time at the Children's National Medical Center in Rockville, Md., deals with concussed student-athletes who have school-based problems, he said. And his own recent research has found that students who don't get the proper support have a myriad of issues that can set them up for failure, including headaches, fatigue, wavering concentration, and difficulties organizing thoughts.

None of that is news to athletes such as Chang and Mullen. "Every other kid that I've talked to that go to different schools, their teachers don't really care about concussions," said Mullen, 17. One of his friends who suffered a concussion resumed his full class load within two weeks, he said, and ultimately he failed two courses.

Mullen made a gradual recovery over 3 1/2 months, finishing Grade 11 with an average of 80 per cent. Next year he's bound for the University of Virginia on a full athletic scholarship. 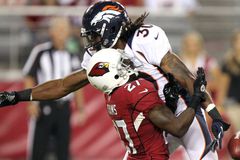