Many declared them stone cold as early as Christmas – "Look, Matey, I know a dead parrot when I see one."

Monty Python would love the Ottawa Senators – a team as unpredictable as a skit, with an unlikely character nicknamed "The Hamburglar" coming to the rescue when all seemed lost for the year.

Only a month back, the Senators were in 13th place in the 15-team Eastern Conference, ardent fans reluctantly embracing a hot suggestion about town that they should "tank" it right to the bottom and trust in the draft lottery delivering junior sensation Connor McDavid come June.

Worse, both goaltenders – Craig Anderson and Robin Lehner – were injured. The unlikely replacement, 27-year-old Andrew Hammond from White Rock, B.C., had been cut from his junior team, was never drafted and was known only in Ottawa for weak play with the club's minor-league affiliate in Binghamton, N.Y.

In a Dec. 17 match against the Lehigh Valley Phantoms, Hammond gave up three goals on three shots in the opening 36 seconds – and was yanked.

The hockey gods must be Python fans, though, for the Senators were forced to turn to the goaltender nicknamed after a McDonald's cartoon figure, set out for California – where traditionally, the Senators have fared poorly – and returned home sporting a 10-1-2 record over their past 13 games.

As for Hammond, he has yet to lose an NHL match, having a 7-0-1 record that actually had people calling him "Ken Dryden" rather than "Hamburglar," a reference to the then-unknown Dryden's late-season heroics in 1971 that took the Montreal Canadiens all the way to the Stanley Cup.

Tuesday night in Ottawa was heralded as "The Biggest Game of the Year" for the Senators, now surprisingly back within sight of a playoff spot after their recent success.

They would face the Boston Bruins, the team holding on to the final playoff spot in the conference, five points ahead of the Senators but Ottawa with a game in hand. A month ago, the Senators had been 14 points back of the Bruins. A victory this night would close the gap to three points, with the teams slated to play again Mar. 19.

Well, not quite – but it was a big one. One that one would presume would feature "Hamburglar" in goal. Especially since Anderson's difficult third period against Calgary on Sunday.

But it was not to be. Head coach Dave Cameron, either playing a hunch or out to lunch, elected to go again with Anderson.

Boston head coach Claude Julien had praised the Hammond-led charge that had "put them back in the race," but he also knew that his team needed to keep playing as well as they had recently – 5-1-1 over the previous seven games – to cement whatever hold his team had on a playoff berth.

Fans came expecting fireworks – they got a match with such early little spark it took Ottawa past the 10-minute mark of the first period to register a shot on goal.

The first goal did not come until a Boston power play early in the second – and was scored in true Hollywood style by rookie Ryan Spooner, who had grown up in the very Kanata suburb where the Canadian Tire Centre is located.

Spooner took a pass from defenceman Dougie Hamilton and fired a wrist shot high over Anderson's blocker and off the far post and in.

With the Senators struggling to get out of their own end and stymied whenever they could get a shot off by Bruins goaltender Tuukka Rask or the iron behind Rask, the Bruins slowly took over the game.

They went ahead 2-0 when, with the teams playing four-on-four hockey, Boston forward Loui Eriksson raced down the ice, deftly tucked a puck past Ottawa defenceman Cody Ceci and skirted past Anderson to slip the puck into an open side.

Boston made it 3-0 when hulking forward Milan Lucic carried the puck into the Ottawa end and one-handed a pass across the crease bounce in off the leg of 23-year-old Spooner, the local darling in the wrong colours with only his third goal of the season.

Surely, however, he wasn't thinking of all the Spooner relatives sitting in the stands.

Midway through the final period, Ottawa finally got on the scoreboard when rookie Matt Puempel clipped a rebound off the backboards in behind Rask.

In the end, the Senators outshot the Bruins 40-22, but there was to be no third-period rally as the Calgary Flames had put on two days earlier.

The Senators lost 3-1 and fell seven points back.

Editor's note: A previous version of this story said Craig Anderson played in the first game back from a road trip on March 8 vs. Calgary. In fact, the Senators played a home game March 6 against Buffalo. This version has been updated.

Senators’ Anderson to make second straight start in goal against the Bruins
March 9, 2015 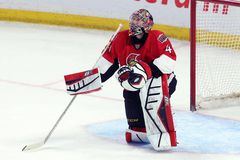 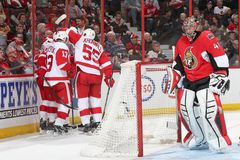 How John Tavares became the NHL's most dangerous scorer
March 10, 2015 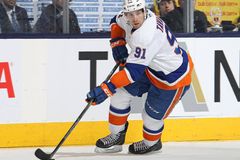 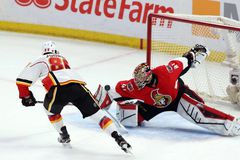 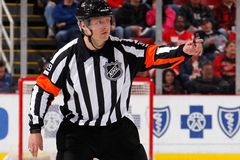