"I use my empirical experience and I refereed for 23 years, and that prejudices my opinion, there's no doubt about that," the long-time Hockey Night In Canada host said in an interview yesterday. "But it's almost impossible for me to see a guy [Auger]throw away his career."

MacLean, a certified referee who worked Canadian university and junior games until pocketing his whistle four years ago, drew the ire of Canucks coach Alain Vigneault on Saturday after his team's 6-2 victory over the Pittsburgh Penguins at GM Place.

Vigneault, speaking on HNIC 's After Hours, said MacLean's pregame segment, in which he sided with Auger and doubted Burrows' version of their pregame conversation, lacked fairness and balance.

The Canucks called the CBC about MacLean's comments within hours Saturday, and the sides talked again yesterday. MacLean's segment aired around 6:30 p.m. EST before a doubleheader. Vigneault's interview came at 1:15 a.m. EST on Sunday.

MacLean, a nine-time Gemini Award winner, said his officiating experience helps inform his reporting, and that his only regret was not being emphatic enough during a narration of Burrows' behaviour in a Dec. 8 game.

In that game, Burrows appeared to be feigning an injury to draw a stiffer penalty against his opponent. MacLean said he didn't mean to put words in Burrows' mouth, and should have qualified his description more strongly.

But he made no apologies for his premise - that Auger's story was more believable than Burrows' - during the 11-minute segment, nor his failure to press Colin Campbell, the NHL's senior vice-president and director of hockey operations, on whether the referee acted on a bias. MacLean said he was trying to dig at a deeper issue - how the NHL has managed its discipline of the Canucks' agitator.

Burrows has earned a place on the league's "watch list" for previous indiscretions, and has a reputation for diving and trash talking. When asked if he believed that meant Burrows deserved comeuppance calls, MacLean said: "Of course not. But it could explain it."

The 49-year-old broadcaster said he was trying to examine Burrows' past, and determine how officials can arrive at judgments against individual players. He said on-ice justice can sometimes derive from a player's track record, and that episodes involving certain officials can be at the root of some calls.

"It's inconceivable for an official to tell a player he'd get him back," MacLean said. "It's not inconceivable that he would do it."

MacLean is in his 24th year at the Saturday-night pulpit, and his refereeing background is well known by the HNIC audience. Over the years, he has criticized and backed the league's officiating, and is known for his adversarial interviews with NHL commissioner Gary Bettman.

"If you look at Ron's history in television, he's never been in anyone's corner more than another," HNIC executive producer Sherali Najak said. "There are no agendas."

Last Monday, Burrows ignited an NHL scandal when he accused Auger of approaching him before a game against the Nashville Predators and vowing to settle a score.

Burrows embarrassed Auger in a Dec. 8 game when a theatrical reaction to a check from Nashville's Jerred Smithson duped the referee into calling a five-minute penalty and a game misconduct. The misconduct was later expunged from Smithson's record after an NHL review. Auger was told that the cross-check merited a two-minute penalty by NHL director of officiating Terry Gregson.

In the rematch last week, Auger called Burrows for two controversial penalties in the third period, and the Canucks' pesky forward was in the box when Nashville scored the winning goal.

MacLean said the questionable interference penalty on Burrows was an "even-up" call that followed a marginal penalty on Nashville's Francis Bouillon earlier in the period. He said the game was not well officiated, and that Auger should never have been assigned to it based on his history with Burrows.

Though Campbell admitted it was "inappropriate" for Auger to raise the Dec. 8 incident with Burrows before the game, MacLean said he saw nothing wrong with the referee delivering a warning.

Burrows given no chance to defend himself
January 17, 2010 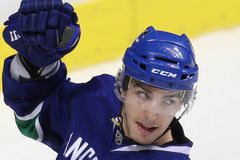 Vigneault slams CBC's MacLean
January 17, 2010
Burrows incident lingers for NHL
January 15, 2010
History runs deep in Burrows-Auger feud
January 19, 2010
Follow Matthew Sekeres on Twitter @mattsekeres
Report an error Editorial code of conduct
Due to technical reasons, we have temporarily removed commenting from our articles. We hope to have this fixed soon. Thank you for your patience. If you are looking to give feedback on our new site, please send it along to feedback@globeandmail.com. If you want to write a letter to the editor, please forward to letters@globeandmail.com.
Comments