To a woman, the members of Canada's national soccer team arrived at the Women's World Cup in Germany imbued with a kind of evangelistic zeal when it came to their coach, Carolina Morace.

She had retaught them the game from the ground up, given them the gift of style, of beautiful, technically and tactically advanced soccer, and they prospered, rising to a historic high of sixth in the world. She had taken them to Italy and immersed them in an obsessive soccer culture. She had stood beside them as both fought the Canadian Soccer Association - the players for compensation, Morace for autonomy - and in winning those battles, had created what every coach desires, a sense of us against the world.

In the opening match against heavily favoured Germany in front of a crowd of more than 70,000, the Canadian team lost but held its own. A few days later, as speculation centred on whether captain Christine Sinclair could play with a broken nose (the team knew all along that she would), Morace instructed her players to lie to the press to throw off their next opponents, the French.

They did as told, enthusiastically.

But cults of personality tend to come crashing down hard. France wasn't exactly bamboozled by Morace's subterfuge, thumping Canada 4-0 and effectively knocking it out of the tournament. During the final, bitter days in Germany, as the coach did her best to make it clear that the abject failure wasn't hers, it was hard not to feel that she was throwing her players under the bus, while also falling back on the old reliable - blaming the CSA.

Morace didn't quit after the humiliating loss against Nigeria in Canada's final match, during which she hardly communicated with her team. Instead, she waited until Wednesday, when, in the middle of what must have been an extremely uncomfortable performance review and debriefing organized by Own The Podium (which included a representative of the players), she and her staff resigned before the process had concluded.

Unlike last February, when Morace announced that she would quit after the World Cup, only to be persuaded to come back and recommit to the program, none of the stakeholders this time fought to keep her.

Now, with that intriguing chapter in the history of Canadian soccer closed, they have precious little time to turn the page.

Since last May, as part of the deal that kept Morace on the job, the women's national team has been operated by a high-performance management group made up of representatives of the CSA, Own The Podium and b2ten, the private-sector charitable group organized to provide support for Canadian amateur athletes.

That collective will now have to find a new coach before the end of the summer. Given the realities of the game and the lack of homegrown candidates, the new coach will almost certainly come from somewhere other than Canada.

The team itself will be coming home. "We need to bring the team back to Canada to reintroduce it to the Canadian public," the CSA's general secretary, Peter Montopoli, said Friday. "We're looking to be back in Canada beginning in September."

With a new coach and a new staff, it will begin preparing for Olympic qualifying in Vancouver in January, a tournament that could have a huge impact on Canada's prospects as host of the 2015 Women's World Cup.

Montopoli says he would like the team to continue down the sophisticated stylistic path Morace began, but which didn't prove successful when faced with the extraordinarily high level of competition at this World Cup.

"It was a very good transition to the next step," he said of the Morace era. But if Canada doesn't qualify for London (two teams go through from the tournament, with the United States a heavy favourite for one of the spots, and Mexico on the rise), all bets are off. Own The Podium and b2ten are writing significant cheques, and though both remain committed to the team and to women's soccer in general, OTP especially is designed specifically to promote and reward world-level performance.

"I can't say without a doubt that we will continue to support them past 2012," Alex Baumann, OTP's CEO, said when asked what might happen if the women don't qualify for the Olympics.

Tricky times, then. No room for error.

And for Morace's successor, fences to mend, confidence to rebuild, and some unique shoes to fill. 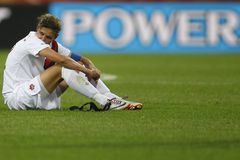 Canadian women's soccer team needs to pick up the pieces
July 5, 2011
Not Canada’s Day
June 30, 2011
Unhappy times around Canada’s World Cup squad
July 3, 2011
Whither Christine Sinclair?
June 29, 2011
new
Christine Sinclair enters pantheon of Canadian sporting icons
June 27, 2011
Follow us on Twitter @globe_sports Opens in a new window
Report an error Editorial code of conduct
Due to technical reasons, we have temporarily removed commenting from our articles. We hope to have this fixed soon. Thank you for your patience. If you are looking to give feedback on our new site, please send it along to feedback@globeandmail.com. If you want to write a letter to the editor, please forward to letters@globeandmail.com.
Comments