A champion humbled in the cage. Personal turmoil. For Georges St-Pierre, "his worst nightmare."

"I have never been so messed up mentally in my life," he said.

That was in 2007, six years before the Canadian mixed martial arts star found himself in the spotlight again after a controversial win at UFC 167 Saturday and his revelation that he needs time away from the sport for unexplained personal reasons.

St-Pierre, the face of mixed martial arts, is an elite fighter with the reputation as a model citizen outside the cage. But he is no stranger to unwanted drama.

At UFC 69 in Houston in April 2007, in his first UFC welterweight title defence, he was knocked out by 10-1 underdog Matt (The Terror) Serra. UFC boss Dana White called it "probably the biggest upset in MMA in a long time."

St-Pierre later spoke of upheaval in his life.

"I had a lot of personal issues," St. Pierre said. "A lot of stuff was going wrong."

It turns out his father was suffering from a brain ailment and a young cousin was in a coma.

Fast forward to today and the 32-year-old from Montreal, who won his title back from Serra in 2008 and went on to become the sport's pay-per-view king, is back in the headlines as pressures outside the cage take their toll.

A split decision over No. 1 contender Johny (Bigg Rigg) Hendricks in Las Vegas drew fire from White, who demanded an investigation into the judging by the Nevada State Athletic Commission

The UFC president wanted an immediate rematch. St-Pierre, who said he left his "soul in the Octagon" against Hendricks, wanted time away to attend to personal issues.

The champion would not detail what was going on

"I need to think. I have stuff going on in my life ... This is my personal life," he told the post-fight news conference. "I cannot speak to you about this. You're a reporter, I know your job is to make thing public. "But I have a personal life, I keep personal some of my stuff."

That has always been St-Pierre's way.

"Georges is very conservative about his personal life. He keeps everything inside," friend and fellow UFC fighter Patrick Cote said back in 2007.

GSP's private life is now headline material again, thanks in part to his opening a Pandora's box Saturday night after his controversial win. He essentially said he had a secret, which set all sorts of people trying to find out what.

A TMZ report said the champion is dealing with a family illness and a personal issue.

After meeting the champion privately Saturday after the fight, White said St-Pierre's issues "aren't as bad as he thinks they are."

"Yeah, we'll get through this," he added.

In St-Pierre's rural Quebec hometown of St-Isidore, south of Montreal, locals said Monday that the champion has nothing left to prove.

Michelle Dubuc says she hired a teenage St-Pierre years ago to work at her St-Isidore farm, tending to vegetables and herbs.

Dubuc said she has known his family for a long time, adding that the champ's father once worked for her dad.

"Georges is a family guy," Dubuc said as she enjoyed a happy-hour beer at the town's local sports bar.

"I don't think money is important for him... He's a simple, nice guy and he loves his people in St-Isidore."

And St-Pierre's father insisted that rumours he has heard about his son aren't true, although he would not elaborate.

"Everything is OK at the moment for him," Roland St-Pierre told The Canadian Press in a brief exchange at his home. "There are things that came out that are not even true."

The elder St-Pierre would only add that his son will determine his own future.

"If he takes a break, it will be him who decides and it will be OK either way," he said, declining to discuss the matter further.

"He will do the right thing."

St-Pierre is very close to his family. One of the first things he did with his UFC winnings was pay off his parents' mortgage.

In the wake of losing his title in 2007, St-Pierre conceded he had more than fighting on his mind before meeting Serra.

"People were dying. I had to go to the hospital at night," he said at the time. "I was sleeping like maybe two, three hours a night when I was training for that fight. I was sleeping with one eye open because I thought I had to go drive my father to hospital and stuff like that.

"I was very worried about a lot of things in my life. Not only this, I had a lot of other stuff going on."

Back then, St. Pierre said he didn't talk about his family issues because he didn't want to intrude on their privacy.

But it was more than just illness in the family. St. Pierre said he lost his way, focusing on PR more than his training.

"I didn't realize how lucky I was, to have this opportunity to be world champion," he added. "Once I lost, I realized all that stuff and it made me regret a lot of things."

Former manager Stephane Patry said at the time that St-Pierre stumbled outside the ring.

"He didn't train as much as he should, because he was too busy doing other things than training and fighting," Patry said.

"He won the title, he's a kid, he was 25 years old," Patry added, when pressed. "Let's just say he partied a little bit too much."

St-Pierre subsequently retooled his organization and entourage. He has not lost since, with the Hendricks fight — and its apparent surrounding personal pressures — his closest call.

In the wake of the Hendricks fight, the Nevada commission issued a medical suspension to St-Pierre until Jan. 10, with no contact in training until Dec. 17.

Hendricks, whose face showed almost no traces that he had been in a fight, was suspended until Dec. 17 with no contact before Dec. 8. But he was also told to get orthopedic clearance on his right knee or else face a ban until May 17.

St-Pierre himself was all smiles Monday. The champion tweeted a picture of himself in his Las Vegas hotel with four friends including his mentor, former fighter Kristof (The French Hurricane) Midoux.

He wore a big grin and dark glasses to conceal facial damage from the fight.

St-Pierre received a basic purse of US$400,000 while Hendricks got $50,000, missing out on a matching win bonus, according to the Nevada state commission.

The UFC awarded both fighters an additional $50,000 as a fight of the night bonus.

The purse information only tells part of the financial story, however, since the UFC does not reveal all of its pay figures. St-Pierre's paycheque would be the millions given he is the UFC's largest draw and gets a cut of the lucrative pay-per-view revenue.

Hendricks (15-2) would also have made considerably more than the posted figure.

Fellow Montreal welterweight Rory MacDonald made a basic purse of $50,000 for his decision loss to (Ruthless) Robbie Lawler, who picked up $166,000 including a win bonus of $83,000. 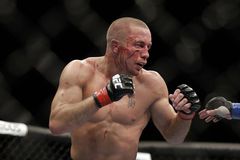 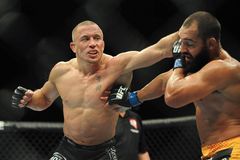 UFC boss says Georges St-Pierre is the epitome of a champion
November 15, 2013 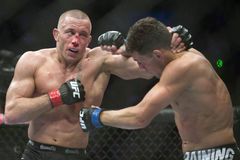 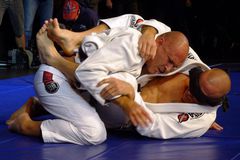