When Stacey Allaster's daughter, Alexandra, learned that her mother, one of the most powerful female executives in pro sports, was leaving her job as head of women's tennis, the 11-year-old said: "Good, now you can drive me to my hockey games."

That effectively explains the Women's Tennis Association's announcement on Tuesday – that Allaster will step down as its chairman and chief executive officer effective Oct. 2, leaving a role she has held since 2009. The native of Welland, Ont., said that 150 days of worldwide travel a year have taken a toll on her, and she wants to spend more time with her husband and two kids.

"I love the WTA, but this is what's right for me personally and for our family, and if I'm being honest, this has been two years in the making," said Allaster, reached at her home in St. Petersburg, Fla.

"We always knew that once the kids hit the teenage years, that the international travel wasn't in alignment with how much I want to be there for them. I turned 50 two years ago and have been on this path.

"I came out of the U.S. Open completely worn down, and I don't want to wake up and be one of those women who has a heart attack or stroke. The WTA needs someone who is at 150 per cent, and I'm not there any more."

Allaster was also deeply moved by the recent death of her husband's brother, and two years ago by the passing of ATP Tour CEO Brad Drewett, saying they "provided a personal wake-up call about life, family and priorities."

The Canadian took up the game at the Welland Tennis Club at the age of 12. She worked her way up in the industry from a job cleaning courts at her club for pocket change, and did some coaching before tackling roles with the Ontario Tennis Association, Tennis Canada and as tournament director of what would become the Rogers Cup. Allaster joined the WTA as president in 2006.

Allaster helped the WTA make big strides on issues including equal prize money for women at six WTA events and all four Grand Slams. It made fan-friendly improvements to the game and adopted new uses of data and technology. She spearheaded growth into Asia Pacific, landing Singapore as five-year host of the WTA Finals in the largest financial partnership ever negotiated for the tour's season finale.

She was key in securing a record number of sponsors for the tour that plays 54 events in 33 countries each year, which has made several WTA stars the highest-paid female athletes on the planet. Allaster travelled between WTA offices in Florida, London, Beijing and Singapore. Forbes Magazine named her to its list of the most powerful women in sports.

"Stacey has been a visionary leader for tennis this past decade. She brought positive fundamental change while serving as an exemplary role model and she executed our biggest and best financial strategies during a very difficult economy," WTA founder and legendary tennis player Billie Jean King said in the statement. "Stacey performed her job with tenacity and heart which is what is required for transformational change."

The news surprised many in the sport, even Tennis Canada's president and CEO Kelly Murumets, who grew up with Allaster in Welland.

"I'll miss her being in my tennis world; she's a confidante – there aren't that many women executives in tennis," Murumets said. "She will leave a huge legacy as a credible role model for other women in business. She's a dynamo. She represented the players while at the same time maintaining a good relationship with the tournaments, and that's very difficult to do. In the ego-driven world of sport, she could manage egos and drive things to conclusion."

Several current and former players reacted on Twitter to the departure of a CEO who was known for visiting with players at tour stops and asking their opinions.

"What a great leader and role model she was to us! Stacey, congrats on everything you have done for our tour and thank you," retired star Kim Clijsters tweeted.

"Stacey was truly an inspiring person and did a wonderful job as the CEO of the WTA! We will miss seeing you around," Monica Puig wrote.

"A very brave decision. Stacey worked relentlessly to bring the game to another level. Respect her family priorities," a tweet from from Chrissie Evert said.

The WTA said its search for Allaster's replacement has begun.

The University of Western Ontario graduate says she plans to take a long break, which she never did between previous jobs.

She'll focus on time with her husband, John (a real estate agent), hockey-crazy daughter Alex and 13-year-old son Jack, who is into writing and music.

"As a girl at age 12, I was given a racquet, a membership at the Welland Tennis Club and lessons, and look what that opportunity gave me," Allaster said.

"I achieved everything I wanted to do at the WTA. I felt a great deal of pressure to be successful as a woman in this role, and to give back to the sport that has given so much to me, and I feel I accomplished that."

Eugenie Bouchard pulls out of Tokyo tournament due to concussion
September 17, 2015 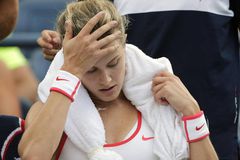 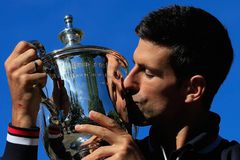 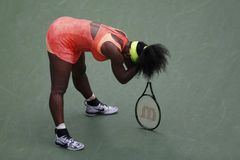