The 22-year-old attended the Arsenal-Chelsea soccer game at Wembley Stadium. He toured the London and Tower bridges. He caught a couple of movies – War for the Planet of the Apes and Girls Trip.

"It was the first time I actually got to do something in a city, because I'm always focused on track, and I never get a chance to really go out and see things, so it was my first time actually doing that at a championship," he said. "I just tried to be happy, be positive, and find other things to do."

And he watched the dramatic 100-metre final from his hotel room, and couldn't help but think: what if?

De Grasse, who enjoyed a meteoric rise up the sprint ranks before suffering his first significant injury, is back home in Toronto for rehabilitation on his torn hamstring and said he's firmly resolved to come back better than ever.

"I guess everything happens for a reason," said De Grasse. "You could say it was a humbling experience for me, just looking back and saying I accomplished a lot in the last couple of years. I wasn't too upset with myself to say 'Hey I missed an important chapter in my career,' because I know there's going to be more championships.

The Markham, Ont., sprinter was poised to capture as many as three medals earlier this month in London, in the 100 and 200 metres and the 4x100 relay.

Instead, De Grasse suffered a hamstring injury in training and was forced to withdraw. It was only the first bit of bad news on a trip that completely unravelled for a Canadian team walloped by injuries and illness.

De Grasse had been gunning for Bolt and his 100-metre crown, but it was Americans Justin Gatlin and Christian Coleman who stole the Jamaican's spotlight in his career finale.

"It was pretty shocking," De Grasse said. "I enjoyed watching it. I wish I could've been in there, but it was still a great race.

The three-time medallist from last summer's Olympics said his recovery is on track.

"I'm jogging, a lot of isometric drills, high-knee drills, kind of just trying to get my hamstring strong again," he said. "So a lot of gym workouts, nothing too complicated, about 30 minutes to an hour every day, working on my lower body, and then just two or three laps around the track."

He plans to return to his training base in Phoenix in late September to gear up for a busy season that includes the Commonwealth Games in April (he plans to run one individual race and the relay), the NACAC championships in Toronto – which will feature teams from North America, Central America and the Caribbean – and the Diamond League circuit.

While De Grasse's injury robbed him of a final showdown with Bolt, the Canadian said there was no bad blood between the two Puma star sprinters. In the leadup to London, much had been made of an apparent and bitter end to their friendship, but De Grasse insisted that wasn't the case.

De Grasse said he spoke to Jamaica's nine-time Olympic champ a couple of times in passing in London, and a television camera caught a quick embrace between the two prior to the relay.

"We're cool," De Grasse said. "I know the media says we're against each other and we're enemies, but that's not true. I still respect him, I still say 'What's up?' or 'Good luck' or whatever it is.

"For me, I'm a competitor, so I never mean disrespect, I'm not a cocky person or an arrogant person, but obviously I always want to go out there and win just like everyone else." 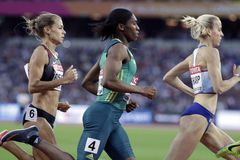 Andre De Grasse wins 200-metre title at Canadian track and field championships
July 9, 2017
Report an error
Due to technical reasons, we have temporarily removed commenting from our articles. We hope to have this fixed soon. Thank you for your patience. If you are looking to give feedback on our new site, please send it along to feedback@globeandmail.com. If you want to write a letter to the editor, please forward to letters@globeandmail.com.
Comments