Victoria Azarenka is constantly trying to prove herself.

Azarenka made history as the first player from Belarus to win a Grand Slam by thrashing Maria Sharapova in the final of the Australian Open last year.

Young, attractive and full of personality, she looked set to be the new face of women's tennis. But when Serena Williams won Wimbledon, the Olympics, the US Open and the WTA Tour finals, she put Azarenka firmly in the shade.

She lost in the fourth round at Roland Garros, the semi-finals at Wimbledon, was pipped by Williams in the final in New York and fell in the semi-finals of the WTA Championships. Her doubters had ammunition.

The 23-year-old, however, has the opportunity to affirm her standing when she battles China's Li Na in the final of the Australian Open on Saturday. Her ranking and reputation is on her racquet. The equation is simple.

If Azarenka defends her title, she stays at number one. If she loses, the honour goes to Williams. Azarenka will receive what she deserves.

In her early years on tour, Azarenka was regarded as too emotionally and physically weak to threaten the top players. She withdrew from matches because of injuries and lost her nerve in winning positions.

Famously, she was taken from the court at the 2010 US Open in a wheelchair after collapsing behind the baseline while trailing Gisele Dulko 5-1. She was diagnosed with concussion in what had already become a long list of physical setbacks.

Her commanding 6-3, 6-0 defeat of Sharapova in last year's decider was supposed to exorcise all demons, but in Melbourne she again finds herself under seige.

Her on-court grunting has long been regarded as a form of gamesmanship and her injury timeout against Sloane Stephens, immediately after blowing five match points in Thursday's semi-final, was described by the teenager's coach, David Nainkin, as "cheating within the rules."

And the 23-year-old was sternly criticized in Australian newspapers on Friday.

"Let's hope she loses the final," wrote The Australian. "Aza bad call," was the headline in the Herald-Sun. "Beyond A Choke," was on the front page of The Age. "Azarenka's cheating ain't no choke," said The Daily Telegraph.

Azarenka claimed a misunderstanding during a post-match interview led to the belief she had left the court because she was panicking. She was adamant that rib troubles had caused a shortage of breath and back pain.

Medical staff confirmed the treatment, according to tournament director Craig Tiley, and Azarenka tried to clear the air in an interview with the host broadcaster Channel Seven on Friday.

"The important thing is just to move forward and have a great match tomorrow."

The final against Li provides the chance to prove she can handle any controversy or tense situation thrown at her, and win back a few fans.

"I grow, I mature a little bit," Azarenka said.

"I get a lot more experience over the years. I tended to be a little bit more emotional before. I just try to control my emotions much better now. It takes time to learn.

"I've been doing it over the last couple years, but I'm always going to be an emotional player. It's just a matter of how well you can control your bad emotions." How, exactly?

"You always adapt to a situation," she said. "Sometimes you need to be more aggressive, Kind of (upset) a little bit to pump yourself up. Sometimes you just need to relax and breathe."

Files from Reuters were also used in this report 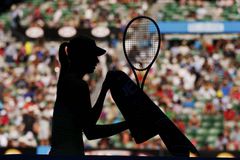