It started with a lace thong.

Pretty soon, each time Canadian figure skater Patrick Chan competed, a panty avalanche ensued from the stands. The next thing the world champion knew, he was leaving competitions with sacks full of perhaps the oddest combination of gifts ever bestowed on an athlete by his fans: dozens of teddy bears, mixed with wads of women's underwear. "They weren't worn," clarified Chan, 23.

"Chanties," as they are called in Canadian skating circles, are just one of the oddities that may be hurled onto the ice surface this weekend at the Hershey Centre in Mississauga for the Canadian Tire National Figure Skating Championships, where Chan is competing for his sixth senior men's title.

Skaters say chocolate bars, love notes, and the odd $100 bill have found their way from the stands onto the ice. Canadian men's singles skater Jeffrey Buttle once received a Louis Vuitton bag.

"I'm hoping for the day that I get panties with I Love Jeremy on the bum," said Jeremy Ten, 23.

Viewers of figure skating will be most familiar with the teddy bears, a ubiquitous and strangely infantile tradition that loyal fans spare for no athlete: male or female, child or adult.

Chan estimates he's received 1,200 of these fuzzy projectiles in the past six years.

To outsiders, tossing a teddy bear to a grown man or woman at the top of their sport seems bizarre. Imagine Sidney Crosby or Steve Nash or Christine Sinclair leaving a championship with a bag full of stuffed animals.

The country's top skaters, while accustomed to it, also seem slightly bemused.

"You know, it's really nice," Chan said. "But it's like, we're 20-something year-old men, right? What are we going to do with teddy bears? It's not like we're going to put them on our beds and sleep with them."

The tradition of tossing things on the ice is nothing new in figure skating. Legendary singles champion Katarina Witt once received a Rolex watch. Her rival, Debbie Thomas, who liked pizza, used to get tossed whole boxes. In the 1980s and 1990s, red roses were often the gift of choice, until sports officials became concerned that rogue petals and busted-up stems were becoming a safety hazard. Now, only things wrapped in packaging can be tossed on the ice. As a result, skaters say the popularity of stuffed animals and wrapped candy has intensified in recent years.

For the sake of efficiency, event organizers deploy systems to deal with the loot. Earlier this year, in preparation for the 2013 world championships in London, Ont., Skate Canada auditioned 50 youngsters aged 9 to 13 for the role of "flower retriever."

The young hopefuls weaved in–and-out of pylons. They skated, stopped, picked up stuffed toys or flowers, and dropped them again. They were prepared to bend down some 100 times per competition, and smile all the while. Only 20 made the cut.

Once the flower retrievers scoop up the toys, volunteers put them in bags, which are delivered to skaters after they exit the kiss-and-cry area. Inside the change rooms, or back at the hotel, they dig around and see what's there.

"I've had a letter, and it had a $100 bill in it, and a note saying thank-you for taking a picture with my daughter," said mens singles skater Ellaj Balde, 23.

Getting these bags home can be troublesome, especially if you're dealing with long-haul flights. Then there's the matter of what to do with them once they're in your house.

Jeremy Ten, a 23-year-old Vancouver, B.C. native who estimates he's received "hundreds" of bears over the years, kept them in his bedroom for a while.

"I got to the point where I hit puberty and I realized, this isn't cool anymore," he said.

Other skaters, like defending Canadian pairs champion Meagan Duhamel, say they keep only the most special and unique stuffed animals as mementoes. The rest she gives away to family members and friends who have children. The obvious outlet would be to donate the toys to a children's hospital, but skaters say hospitals have sanitation requirements and won't accept the animals unless they've been dry-cleaned and packaged. The Salvation Army is another outlet, but how many bears does it really need?

Often, as a result, skaters' homes become a teddy-bear wasteland.

Balde has a closet full of them.

Chan has bags of teddy bears in his house.

"I have 500 [teddy bears] in my garage right now," said Elizabeth Manley, Olympic silver medalist at the 1988 Games in Calgary.

This was not her intention. After receiving a windfall of gifts during and after the 1988 Games, she tried to give them to charity. But the charity wanted them dry-cleaned. It seemed more trouble and expense than they were worth.

"My husband hates it," Manley says. "They're in the way of the snow blower." 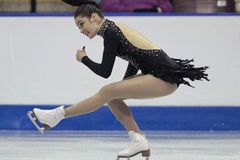 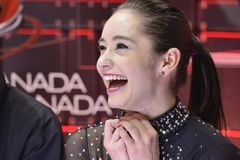 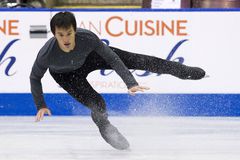 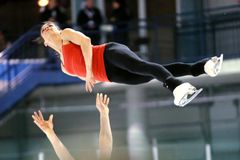 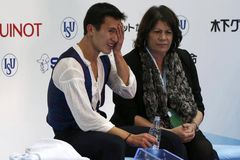