At the end of an indoor running track, athletes pace nervously, preparing for their chance to sprint down the lanes and see if they have what it takes.

The 28 athletes come from various arenas, having excelled at rugby, track and field, football, CrossFit, weightlifting or hockey. But they have gathered at McMaster University on a September afternoon, hoping to reinvent themselves: Just maybe, among them is a rare find – an athlete who has the perfect combination of strength, speed, guts and determination to develop into one of Canada's next Olympic bobsleigh or skeleton athletes.

Over the years, Canada has won seven Olympic medals in bobsleigh, four in skeleton, and dozens more at World Championships.

Olympic success made Kaillie Humphries, Heather Moyse and Jon Montgomery household names. Yet stocking Canada's cupboard with new sliders still isn't easy. Unlike hockey, soccer or basketball, people don't take these sports up as kids, so Bobsleigh Canada Skeleton has to get creative and aggressive about recruiting.

So historically, nearly all of Canada's medalists have been mined from other sports.

Humphries was an alpine ski racer; Moyse played rugby and represented Canada at the 2006 Winter Games in bobsleigh just four months after trying the sport for the first time.

"It doesn't matter how good you are in your other sport, you're coming into a totally different sport and this is a team sport," said Jesse Lumsden, a CFL running back turned Olympic bobsledder.

"They're looking for a fast, strong athlete, but also someone with a really positive attitude and willingness to work and learn. They have to understand that some come in and make it to the Olympics within a year, while for others it takes longer. And some never make it there at all."

And across the country, they hold open combine-style camps such as this one in Hamilton. Promising prospects can be quickly identified with simple dry-land physical tests such as sprints, jumps, ball tosses and weightlifting.

If they perform well, prospects may be invited to try pushing a sled with Ontario's team in Lake Placid, N.Y., or out in Calgary.

"Speed is king – it's the No. 1 thing we're looking for," said Esther Dalle, a former skeleton athlete who's now the recruiting co-ordinator for the Ontario Bobsleigh Skeleton Association. "It's my job to fill the pipeline with more athletes. If their numbers are good here, we may invite them to sliding school. Then they get to the top of the track, look down and decide 'Oh yeah, this is totally for me,' or they say 'Nope, this isn't going to happen.'"

It isn't just about talent. It takes a big commitment, because athletes must relocate to train near one of the country's few sliding tracks – in Whistler, B.C., or Calgary.

"We're having more camps in more places, and we have a new provincial association starting up in Quebec to work with athletes there, and a sport co-ordinator watching all sports," said Chris le Bihan, a 2010 Olympic bronze medalist in bobsleigh who is now working as a technical coach with the team.

Rachel Hauck has attended six McMaster camps in the past two years. The 22-year-old from Kitchener, Ont., who played field hockey and rugby, got the bug to slide when she watched Humphries and Moyse win bobsleigh gold at the 2010 Vancouver Olympics.

"The first time I came here, I had never done testing like this, had never done a power clean in the weight room, and I was intimidated. My scores weren't good enough and I actually cried in my car on the way home," Hauck said. But she kept training, kept returning to the camp, and when her scores improved dramatically, she was invited for bobsleigh training in Lake Placid, N.Y., and Calgary with Ontario's team, so they can develop her as a pilot. She continues to test, determined to keep showing new personal bests in her scores, eyeing a berth on the 2022 Olympic team.

In addition to other dry-land tests, each athlete sprints 45 metres through a laser-timing system that measures the various 15-metre intervals to record speed and explosive power. A camp organizer waves a cowbell wildly and hollers as they run, just like in an international sliding event, where the push start can make or break a run.

For bobsleigh, coaches seek a man who runs 30 metres faster than 3.9 seconds and weighs at least 90 kilograms (198 lbs), or a woman of more than 68 kilograms (149 lbs) who runs it in 4.2 seconds. Athletes for skeleton can be lighter.

Two brothers, Colin and Michael Phillips, university track athletes at York University and the University of Waterloo, respectively, put up scores in Hamilton that identify them as serious prospects. While they have aspirations to push a bobsled for Canada, training full-time isn't possible until they finish university.

The athletes move off the McMaster track to do a simple standing-broad-jump test, which helps assess explosive leg power. "These tests are a lot like a football combine, so I feel pretty comfortable," said Jacob Grant, 22, a former linebacker at Concordia University who was chosen for bobsleigh training in Lake Placid and Calgary from a previous Hamilton camp. "I'd love to see how far I can go with this."

Dalle says she has seen six to eight athletes in the past few camps who will be invited to sliding school in Lake Placid and to train with the Ontario team. Others will be told to try working with a sprint coach or to build more strength in the weight room and come back to test again.

"We used to be happy to see 10 athletes out at one of our camps, but now 20 to 30 is average in Hamilton, and the camp held right after the Olympics this year had 70," said Dalle, adding: "You never know who you'll get. You could discover someone who will make it to the next Olympics." 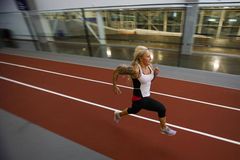 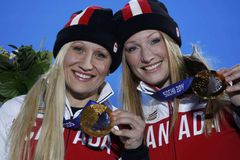