Eugenie Bouchard can't see the end of the football field for the darkness. But it doesn't stop the determined young tennis player from sprinting ahead full-tilt, pulling a weighted sled behind her up and down the darkened turf over and over again, long after the Florida sun has set.

It's a few days before Christmas, and there is precious time remaining in the off-season before the rising Canadian star heads for Australia to begin the new WTA campaign. She spent the last five weeks of 2013 working in the gym, running on the sandy beaches and honing her game on courts around southeast Florida from Plantation to Boca Raton.

This particular training day began with on-court work at 9 a.m., followed by a long practice match, a business meeting with her agent and now a two-hour evening session with a physical trainer hired to make the 19-year-old faster, stronger and more agile. A workout that began inside the gym involving medicine balls and elastic bands, heavy weights and hurdles is winding down here, with the 5-foot-10, long-legged athlete sweating and breathless, relentlessly towing the sled.

The native of the Montreal suburb of Westmount started 2013 as a relative unknown on the WTA Tour, ranked No. 147. After it was over, she was named the tour's newcomer of the year. She begins 2014 at No. 31 in the world, the highest-ranked teen in tennis and seeded at next week's Australian Open.

She was named The Canadian Press female athlete of the year for a breakout season brimming with career results, such as upsets of tour stars Jelena Jankovic and Ana Ivanovic. Just 18 months ago, Bouchard was winning a junior Wimbledon title. Now, beginning her second full season on the WTA circuit, she hungers to take another big jump in the rankings and make noise in the Grand Slams.

"Playing week in and week out against the best players in the world helped me develop mentally last year, and I learned a lot about just how mentally tough it is on the tour," Bouchard said during an interview that runs on and off throughout the day, mostly during long car rides between various training sessions, with her mother, Julie, behind the wheel. "It's what I love, and I really want to succeed. It's the life I want."

Bouchard has spent much of her time training in this South Florida tennis hotbed since she was 12. She aspired to this career early, shortly after discovering tennis at 5, at a club on Nuns' Island, near Montreal. The determined youngster moved south full-time with her mother and three siblings and spent ages 12 to 15 developing her game at an elite tennis academy under former American ATP player Nick Saviano.

"It's become a second home, we have friends here, and we're big Miami Heat [NBA] fans," said Bouchard, who is often joined by her mom on the road. "Nick has always been a tough coach on the court in drills, working on parts of my game, and I have always liked that toughness. I like to work hard. He's always had the same mentality about striving for excellence."

Although she left Florida at 15 to train for a few years at the Tennis Canada National Training Centre, which had just opened in Montreal, she still made regular trips to work with Saviano, who is still coaching her seven years later.

Saviano, who also has coached tour pros such as Sloane Stephens and Laura Robson at his busy academy, recently agreed to travel with Bouchard on tour this year, helping her take the next step.

"I sure as heck wouldn't be travelling anywhere with her if I didn't know for certain how serious she was and how badly she wants success," Saviano said. "She's a great athlete and capitalizes on that when she's great defensively, running down balls and intimidating with her speed and athleticism. When she fully maximizes that athleticism on the court, she becomes special."

Being a top-32 player means not having to play qualifiers or face top-10 opponents in the early rounds of big tournaments. Now, to climb further into the upper echelon of women's tennis and play deeper into Grand Slams, she's working to improve the things that complement her aggressive style: gaining consistency, better on-court movement, fitness and strength.

"Eugenie hits the ball really, really early, and then she changes its direction – this is her trademark and it's what makes her special," said Sylvain Bruneau, Tennis Canada's head women's national team coach, who has also worked with Bouchard and was on hand in Florida. "As her opponent, you feel like she is constantly taking time away from you. She's not set into some strict patterns where she does cross court and then goes down the line. She can really change the direction of the ball. She's only 19, and still has a lot to improve, but this makes her stand out."

Bruneau says to beat the elite players on the WTA Tour, Bouchard's serve needs to get a little bigger, she needs to get physically stronger, and her movement must improve to cover more of the court. The ability to be aggressive even when on the move will make her more effective against stars such as Serena Williams, Victoria Azarenka and Maria Sharapova, who hit heavy balls and will counterpunch rather than flub the ball over the net when delivered a little misdirection.

"Angelique Kerber beat her in the U.S. Open, Alizé Cornet beat her at Strasbourg [France], and both said afterward that she makes the tempo so high – it's crazy, it's hell," Bruneau said. "Those players beat her because Genie would make a mistake here and there, and they have experience, but she was rushing them and keeping them on the move, constantly pressing them."

She faced Williams last season in Cincinnati and Sharapova at the French Open – both losses, but valuable moments. Bouchard went two rounds in last summer's Rogers Cup in Toronto, and has yet to make a deep run in a Grand Slam. Nike Inc. has already endorsed the ambitious blonde teen and hosted her at its mega-headquarters in Oregon.

She has much growing to do, but some experts have dubbed her game tailor-made for this tour. International Tennis Hall of Fame member Martina Navratilova has already called her a "potential Grand Slam champion."

Bouchard often gets asked about the rise of tennis in Canada and her success coinciding with that of men's players Milos Raonic and Vasek Pospisil.

Is she excited to be part of it? Absolutely. But beyond Grand Slams and other special events, such as teaming with Raonic at the recent Hopman Cup, she rarely sees them. She's quick to say this is largely an individual sport, and they are all focusing on their own development in their own parts of the world, just as she has from Montreal to Florida and back again since she was young.

"Do I think I can beat anyone on a given day? That's what I believe. I do go on the court every time believing I can win," Bouchard said. "I've always had this self-confidence, but of course being on centre courts at Slams gives you a different confidence than playing at an under-12 Orange Bowl.

"My parents believed in me and so I never cared about the age or the ranking of the girl on the other side of the net. The stage has gotten a lot bigger and tougher now, obviously, but I still feel I can succeed here." 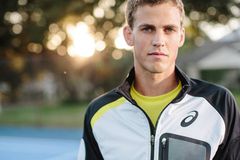 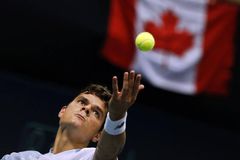 Eugenie Bouchard knows much work to be done despite recent success
November 13, 2013 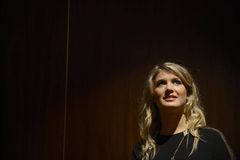 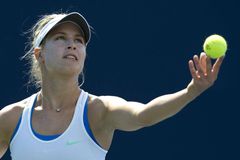