The winner of the 2014 Tim Hortons Brier in Kamloops, B.C., will get an automatic berth in the following year's Canadian championship as Team Canada.

The returning champion wearing the Maple Leaf has been part of the Canadian women's championship since 1985, but never in the Brier.

"I definitely think Team Canada is something that should have happened a very long time ago," four-time Brier champion Kevin Martin says. "I think it's really smart for marketing and to have one more really, really good team in an event. That makes perfect sense to me."

The 2014 Brier winner won't play in their 2015 provincial championship. That team's province will send a provincial winner and thus have double representation that year, albeit one of them in Canada colours.

Ontario skip Glenn Howard is against the move. The 50-year-old feels that cheapens the purple heart crest that each provincial men's champion earns and wears on their team jackets with pride.

"I'm old school," Howard says. "I really don't like the idea of a Team Canada. It really goes back to history and the purple heart.

"It's the most coveted curling crest to win in our minds growing up. I think you have to win the province to earn it. You just don't have it handed to you."

"The dream of a curler is to get a purple heart and to get this purple heart, you've got to win your province," the 2006 Canadian champion says.

"I understand to win the country is great, but it doesn't necessarily mean the following year you'll win your province. Everybody should earn their place at the Brier."

Northern Ontario's Brad Jacobs is on Martin's side.

"We've got a lot of curling left," the 27-year-old says. "It's going to be a goal to win the Brier and come back as Team Canada, for sure. That's kind of cool, I guess."

The Canadian Curling Association voted at its annual general meeting in June, 2012, on measures that will have the national men's and women's championships mirror each other and which will also allow equal access to both national championships for all 14 provincial and territorial associations starting in 2015.

It's always been awkward that the Brier winner did not get the same reward as the Scotties Tournament of Hearts champion.

"It's been in place at the women's national event for a number of years and it has been successful on multiple fronts," CCA chief executive officer Greg Stremlaw says.

"The implementation to the men's national championship is a pretty easy segue to be able to do. It provides a further element of marketability, a marquee team that's able to be marketed for the year leading into the event."

There are provinces strong enough to send a second team behind Team Canada that would be among the best in the field.

The prospect of Kevin Koe representing Alberta if Martin is Team Canada, or Mike McEwen wearing Manitoba colours if Jeff Stoughton is in red and white, is enticing for the CCA and a host committee.

"You could get two teams coming out of the same jurisdiction and they could technically be the two best teams in any given year," Stremlaw says.

If the Team Canada concept is straightforward, giving all provinces and territories equal access to the Brier and Scotties is not.

A Territories representative in the Brier and Scotties field is currently determined by a tournament involving Yukon and Northwest Territories. A true national championship requires extending equal opportunity to both territories as well as Nunavut, says Stremlaw.

"Right now we have a system our association feels is not equitable," he says. "We don't want to be known as a national sport organization that does not provide equitable opportunity for all associations."

What that means is the province or territory that finishes last in the 2014 Brier will drop into a qualifying tournament against the two new teams, with the winner earning a spot in the main 12-team field in 2015.

This year's Canadian senior championship in Abbotsford, B.C., held a qualifying tournament there two days prior to the main event, which is likely what the Brier and Scotties will incorporate, Stremlaw says.

Nunavut didn't enter the seniors, but did have teams in this year's Canadian junior men's and women's championships for the first time.

It could take years for Yukon and Nunavut to earn promotion into the main tournament of the Brier and Scotties. Nunavut curling is in its infancy. Their junior teams were beaten by scores as lopsided as 14-2 and 17-3.

Yellowknife's Jamie Koe skipped the Territories to a playoff berth at last year's Brier and finished mid-pack at 5-6 in Edmonton this year. He says Yukon didn't send any teams to their territorial playdowns in Fort Smith, N.W.T.

"I think Nunavut is a little ways away," Koe says. "It was good to see them have some teams at the juniors, but they got blown away pretty steady every game. But you've got to start somewhere.

"Yukon not sending any teams this year is kind of a red flag for the CCA. You just can't put a competitive team together when there's not a great mass of people to pick from. Even if you do get the right guys, it takes a couple of years just to be able to compete down here. You've got to learn how to win Brier games and it takes awhile."

Using China as an example, Stremlaw says large numbers of curlers aren't necessary to build a strong team. That country has about 100 curlers in a population of over a billion, yet won the 2009 women's world championship and an Olympic bronze medal in 2010.

"It shows you don't necessarily have to have a deep membership base in order to compete," Stremlaw says.

The CCA has decided the qualification tournament is the best way to give all provinces and territories access to the national championships, yet keep the number of teams in the main event manageable.

Stremlaw prefers not to use the word "relegation" but that's essentially what will happen to the province or territory finishing last. That adds another element of intrigue to the round-robin.

"It makes every single game important," he says. "It makes it more meaningful for the teams and the fans. No matter where it is in the overall championship, they know you're fighting not only to win or get a medal, you're also fighting to ensure you stay in the field of 12." 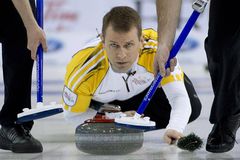 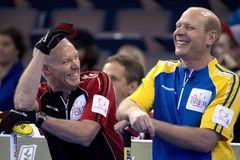 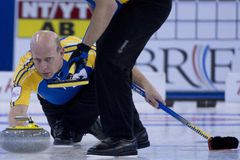 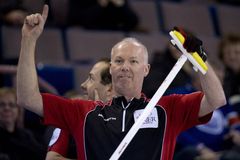 Quebec remains in the hunt for playoff berth with a win at the Brier
March 7, 2013 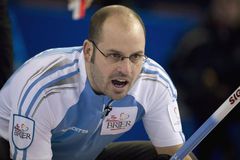