Anyone glancing at the team rosters for the under-19 world ringette championship in London, Ont., this week must have felt confused.

Not a single player on Team France was from France. Team Russia's players could not sing the Russian national anthem. And Team USA certainly wasn't all American.

With the exception of Team Finland, defeated 6-2 by a squad representing Eastern Canada in the gold-medal game Thursday, every team in the six-team tournament – including Canada West – were composed entirely of Canadians.

The result: Canada East took gold, and bronze went to Canada West. And on behalf of Russia, France and the U.S., Canadians earned fourth, fifth, and sixth spots, too.

Such is the state of the sport of ringette, where Finland and Canada have robust programs from the grassroots to the national level, but beyond that the pool of elite U-19 players worldwide is very, very shallow.

"We're very fortunate in Canada that we have Sport Canada funding. But these other countries don't have infrastructure that helps them out. They're unable to field teams this year," said Ellorie Hanson, director of competitions for the International ringette Federation.

The decision to have Canadian players dress in other countries' uniforms at this year's U-19 tournament reflects a desire to grow the game, Hanson said.

Rather than have just Canada and Finland's top squads play each other, organizers decided to host a tournament with more teams, allowing more players to take part and gain higher-level experience.

When Finland committed to sending only one team, the players who didn't make the cut for Canada's two rep squads (East and West), filled out the other three rosters.

Russia, France and the United States were chosen to reflect the fact those countries are developing grassroots programs in the sport, said Frances Losier, sport development director for ringette Canada. "It's symbolic."

"It's to get the word out there that there are other countries that play the game," Hanson added.

But why call the U-19 tournament a world championship?

Hanson said a Swedish team was supposed to come to London, but dropped out in August for financial reasons. In the past, Americans have played in the tournament, but, in perhaps a sign of the state of the sport in that country, the website for USA ringette appears not to have been updated since 2010.

"My understanding was that initially there was some thought that there may be some [Russian] athletes that may be interested in participating. That didn't happen," said Bryson Lamble, head coach of Team Russia, which lost in the bronze-medal match 7-1.

"It was a little bit weird for everyone at first to get used to," Kali MacAdam, 19, said of wearing a Russian jersey. "But we were given a chance to compete at worlds, and I think that was the best part of it."

But while the Russian anthem would not have been played had it won a medal, the team eventually used its assigned nationality as a bonding tool. "Flags were in the stands. Flags were in the dressing room. Flags were on the back of their shirts," Lamble said.

It's been a half-century since the sport was introduced in North Bay – and ringette will celebrate its 50th anniversary with its birthplace playing host to the senior world championship later this year.

That tournament, however, won't be adopting the same format.

The two powerhouses, Canada and Finland, will play in a best-of-five series.

Also expected are teams from Sweden, U.S., and possibly Slovakia and France. They will play in a separate tournament against second-string teams from Canada and Finland.

"Fifty years is not old," Hanson said, noting that, over time, the hope is more countries will embrace the game. 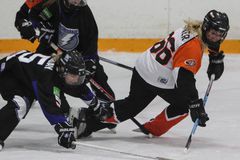