Canada's Eugenie Bouchard earned one of the biggest wins of her career Wednesday by upsetting No. 12 seed Ana Ivanovic 6-3, 6-3 in second-round play at Wimbledon.

Bouchard needed 62 minutes to complete the victory and advance to the third round of a Grand Slam event for the first time in her career. The match was moved to Centre Court from an outside court on short notice after second-seeded Victoria Azarenka withdrew with an injury.

"We only heard about the court change 15 minutes before the match," said Bouchard. "I was actually quite excited. It was crazy to play in front of a big crowd like this. I'm really happy. I was focusing on returns and neutralizing her first serve and I think I did that very well."

Already leading 5-3 in the first set, Bouchard took 12 of 13 points to close that set and go up a break in the second. The 2012 Wimbledon junior champ sealed the victory when she broke Ivanovic's serve on the second match point.

"I think any day I can beat anyone. It's just about playing the way I know I can play," Bouchard said. "Today I was able to stay with her and take my chances when I could. Anything can happen in a match.

"I just tried to work on a few things — trying to be aggressive during the point, neutralize her serve. She served well today, so that was a bit tough for me. I tried to play my game."

In eight previous Wimbledon appearances, Ivanovic — a former world No. 1 — had failed to reach the third round only once. Bouchard, from Montreal, currently holds the No. 66 position in the world rankings.

Ivanovic admitted she was outplayed.

"Definitely (Bouchard) played a very good match today," Ivanovic said. "It was the first time I actually saw her play, so it was obviously a little bit tough to get used to.

"She was tracking the ball really well, serving well. I thought maybe the end of the match she would get tight, but she was really strong the whole way through.

Bouchard finished with 14 winners and 11 unforced errors against the 2008 French Open champion.

"I'm happy to be playing well again," she said. "After winning the juniors, Wimbledon feels like my second home."

Bouchard, 19, improved to 21-14 on the season with the victory. She has posted some other big wins this year, including a third-round victory over U.S. Open winner Samantha Stosur last April at the Family Circle Cup in Charleston, S.C.

Pospisil was up 4-2 in the fifth set and looked like he might join Bouchard in the third round, but the experienced Youzhny won the next four games to advance. The momentum shift came in the eighth game, when Youzhny converted triple-break point to tie the set at 4-4.

"It's tough to close it out, especially if you're playing a top-20 guy who's so experienced. He's ranked where he is because of these kind of wins, he's really good at finding ways to win."

Pospisil's serve had been his strength prior to that game. He finished the match with 26 aces.

"I was definitely trying to do the same things but the big thing that made the difference was the lack of first serves when I was up a break in the fifth," Pospisil said. "It's tough, because they're going to raise their game when they're down a break in the fifth. He's obviously extremely tough and I can't give him two games with mostly second serves." 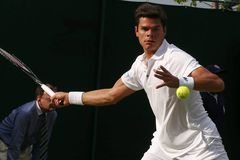