Rosie MacLennan was Canada's only gold medalist at the 2012 Summer Olympics, winning it by compiling the highest score ever tallied in a women's trampoline competition.

Three years later, she gets recognized in public and she's one of the featured faces of Toronto's Pan American Games.

However, success hasn't changed the humble 26-year-old native of King City, Ont., who, rather than draping it around her neck, usually kept her medal tucked into a pocket in the days after she won it in London, only taking it out when the gymnast was asked.

Now, she'd rather talk about how her friend and teammate Karen Cockburn is making a remarkable comeback in the sport after having a baby, or how 19-year-old Halifax gymnast Ellie Black stunned the competition by winning all-around gold earlier this week and "set the tone for all of us."

While still competing, MacLennan is pursuing a master's degree in exercise science at the University of Toronto, she's doing endorsement work on behalf of sponsors such as Canadian Tire and BioSteel, and she was named the first torch bearer for the Pan Am flame as it began its journey to these Games.

She has added new tricks to her repertoire, incorporating three triple flips in a single routine – something only two other women in the world have ever done in competition. She can win with two triples, so it's rarely necessary to add a third – she has done it twice in competition but won't attempt it at the Pan Am Games when she competes Saturday and Sunday. Still, it's good to have it in her back pocket as the 2016 Summer Olympics approach.

As for the astounding world-record score of 57.305 achieved in her final routine in London to beat two rival Chinese trampolinists? It hasn't been matched since.

"Yes, that score is still the highest ever scored for women," said MacLennan. "Nobody has matched it yet. I haven't matched it again since."

After London, she won her first World Championship title in 2013, and followed it up with a silver medal at the 2014 Worlds. This weekend, she hopes to defend her 2011 Pan Am gold medal.

"The Olympic gold medal hasn't changed her; she's just as down to Earth and cool," said Dave Ross, the Canadian women's trampoline team coach. "But it did put a log on the fire for her. Before, she was constantly on the podium but not usually winning. She's even more of a threat now, even more motivated, and she has realized that all that hard work has been paying off."

China and Canada are still the two biggest powers in women's trampoline, but MacLennan says the field is changing and getting younger. She's been impressed by new athletes from the U.S., and thinks the two young competitors coming up behind Cockburn and MacLennan on the Canadian roster – Samantha Sendel and Samantha Smith – could have been medal threats if Canada had four spots in the Pan Am Games instead of just two.

At times, when Cockburn was on leave and Jason Burnett was out after a knee surgery, having the younger athletes around kept MacLennan's fire going when the gym seemed quieter without her long-time training mates.

"Every athlete goes through ups and downs, and has challenges to overcome," she said. "Just because you win an Olympic gold medal, it doesn't mean that goes away." 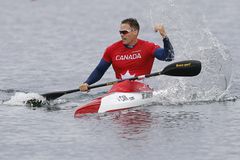 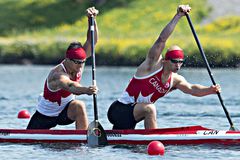 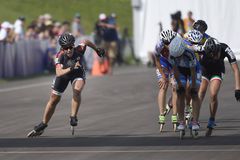 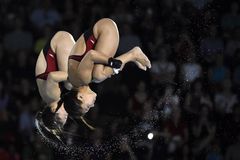 Canada wins gold in men’s coxless four, one of eight Pan Am medals on the water
July 13, 2015 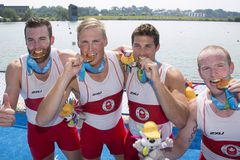