After 31 total sets in a week, most of them played from behind, Pospisil arrived exhausted. By the end, he was gulping air. During breaks, he sprayed his tightening legs with a numbing spray. He injured his right hand midway through the match, and was having it scanned afterward.

Given all that, it was a memorable performance in defeat. Pospisil lost 6-4, 7-5, 6-4 to the world No. 3. It doesn't look close on paper, but it was. A few lucky breaks might've turned it. Pospisil received only the other kind.

The first problem was the (uncovered) stage. Pospisil played on Centre Court during last year's doubles final. It won't have had anything close to the same atmosphere.

As he emerged, William and Kate were in the royal box, along with various other princes, princesses and assorted lesser pashas. David Beckham and Jackie Stewart were spread out amidst the commoners. It was the Big Book of British Smiles come to life.

They all roared Murray's arrival. They cheered his every irritable twitch.

But it's not the noise that unnerves you on tennis's most famed court. It's the silence. You've never heard 15,000 people get so quiet, so quickly, in an enclosed space. It makes the average funeral feel like a rave. The descent of that polite, aural pall can be incredibly eerie.

So Pospisil began nervously. During his first pre-service prep, he accidentally knocked away the bouncing ball. He was down a break early, when it began to rain.

That occasioned a 40-minute delay. Nobody considered closing the Centre Court roof.

Over the next hour, Pospisil was as good as he's been here during the fortnight. He didn't need to consult his suddenly famous blue notebook until he was up 3-2 in the second. Two words were visible on the page: "Murray" and "Fight."

The BBC's local commentators seemed amazed the unseeded Canadian was bothering to try at all. Among their descriptions of Murray's play: "Oh, that's too good ... Amazing! ... He's such a special player ... Genius!"

Apparently, the whole Scottish independence thing won't ding you up in England. As long as you keep winning.

At 4-3 Pospisil in the second set, with the match beginning to tilt slightly in the Canadian's favour, there was a second rain delay. Once again, officials dithered on closing the Centre Court roof.

"It's going to be like this all afternoon," Murray's wife, Kim, said as she retreated from the arena. "What a waste of time."

Shortly thereafter, the lid was deployed.

Kim Murray for president of the All-England club!

After a 35-minute delay, the players returned. The second extended breather moved the advantage back toward the Empire. The colonies treaded water. Then chair umpire Pascal Maria piped up.

Tied in the second at 5-5 and 30-30 during Pospisil's service, Maria called Pospisil for a time violation. That particular game featured several long rallies. Both players were averaging well beyond the 20-second limit between serves. This seemed a needless and largely pointless intrusion into Pospisil's headspace. Even Andy Murray 1.0 – former English star and current TV pundit, Tim Henman, agreed: "It doesn't make much sense to me."

Pospisil fell briefly to arguing – also pointless. Predictably, he lost the next two points and was broken.

"So typical," Pospisil muttered at Maria as he sat down for a break.

Later, he was acid in his criticism.

"I think, a lot of times, these umpires, they seem to just want to be seen. I don't know why they do it at a time like that," Pospisil sighed. "That was ridiculous."

Did he have any suggestions on how the rule could be massaged?

"I think they just need to use their judgment ... try to take little things out of it. You know, maybe their egos."

It was functionally over at that point. From then on, Pospisil was on his back, swinging up at his opponent. Murray was undoubtedly the better player, but it wasn't by a whole lot. It could so easily have been a walkover. Instead, more than any other here, this match proved Pospisil now belongs with the best in the world.

Once it was done, he seemed more ragged than disappointed. He's made an incredible breakthrough in just nine days – jumping to 29th in the world rankings from 56th. He got the zeitgeist's seal of approval – the #AnythingIsPospisil hash tag.

While fellow Canadians Milos Raonic and Eugenie Bouchard struggle through disappointing years, Pospisil is a suddenly tennis-savvy nation's bright young thing. And he's only just about to embark on the hardcourt season – his favoured surface.

Maybe that's why despite everything – a straight-set sweep, Maria's annoying intervention and the aching hand – you could mistake him for someone who'd won. Even while ripping the umpire, he couldn't help laughing at his own cheekiness. An emboldened Pospisil is new to everyone, including Pospisil himself.

He's only 25, but he's been at this for eight years as a professional. Repeated injuries have killed his consistency. Though he's been best known as a doubles player, he is maturing out of that stage of his career. Even he admitted as much, lamenting that playing so often in London "may have hurt me more than helping my cause."

It may be time to focus entirely on the glamour end of the sport. Pospisil's not doing this to make a living any more. He's in the midst of making a reputation.

He may not realize that yet. Most touring pros live in a media bubble during tournaments. They understandably resent intrusions, even pleasant ones. Pospisil said he wasn't sure how big a deal this was in Canada, though he had hopes.

"I've heard that it's been on the front page of papers and stuff back home," he said. "That's always nice to hear. Yeah, so that will happen a little more often now."

Canada can only hope that's a promise. 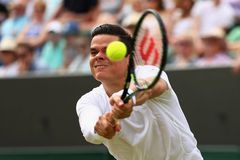