Canada's James Hinchcliffe feels quite comfortable racing at speeds a regular driver can't even begin to contemplate. It's when he's negotiating traffic off the IndyCar circuit that the nerves really come out.

"To be honest, the road actually terrifies me," he said with a laugh while driving in Toronto's downtown core. "I feel much more comfortable doing 300 kilometres an hour on a racetrack than I do doing 100 on the 401 (highway)."

Hinchcliffe stuck to the speed limit during a wide-ranging, half-hour in-car interview. The hairpin turns and straightaways of road racing were replaced by different obstacles like aggressive taxi drivers and omnipresent streetcar tracks.

"On the racetrack I'm surrounded by professionals that have dedicated their entire lives to doing this one task," Hinchcliffe said. "You're in a purpose-built car, at a very safe facility, I'm wearing six seat belts and a helmet, and all these great things. On the road, there's all these things that could jump out at you.

"There's streetcars, pedestrians, there could be some guy that lost his licence a year ago for driving recklessly and he's still somehow in a car. You don't know who you're around. So it's a little bit more of an intimidating task."

Hinchcliffe was in town Monday as part of a media blitz ahead of the July 14-16 Honda Indy Toronto. It's an event that is close to his heart.

He was just a toddler when he took in the race for the first time and he's been to every edition since as either a spectator or a participant. It was on the Exhibition Place grounds where he met his sporting hero, the late Canadian driver Greg Moore, back in 1999.

Hinchcliffe said he waited for over three hours by Moore's trailer that day as he clutched an old steering wheel that he hoped Moore would sign. Eventually a mechanic noticed the young Hinchcliffe and he had Moore come out to sign the wheel and chat.

"That was an unforgettable moment for me as a kid meeting my hero like that," Hinchcliffe recalled. "And obviously it was the last chance I got to meet him because he was killed later that year. So it was a very special moment for me."

He recalled Moore used a "calm but calculated" approach behind the wheel, a style that has influenced Hinchcliffe's racing technique.

The 30-year-old Canadian won at Long Beach this season and he's hoping for big things next month when he returns to the 2.89-kilometre temporary street circuit in his hometown.

Hinchcliffe took a spin along part of the course on a sunny Monday morning as construction crews worked away on barrier placements nearby. He called the 11-turn course one of the most challenging on the circuit because of the asphalt/concrete changes on the road and mix of high– and low-speed corners.

It's also one of the oldest venues on the series. The event made its debut here in 1986.

"It makes it a place that means a little bit more," he said. "You're a little more motivated to want to win here."

Hinchcliffe is now two years removed from a serious accident during practice at Indianapolis Motor Speedway. He was nearly killed when his leg was pierced by a broken piece of suspension.

Hinchcliffe said the accident didn't change his driving style at all, but it did change him personally.

"I think it changed me in a great way," he said. "It's a weird thing to say but in a lot of ways that accident is one of the best things that's ever happened to me."

Hinchcliffe, who drives the No. 5 car for Schmidt Peterson Motorsports, missed the rest of the 2015 season as he recovered. When he returned to the Speedway last year, he claimed the pole for the Indianapolis 500 and went on to finish seventh.

"It puts a lot of things into perspective," Hinchcliffe said of the accident. "It makes you understand what's important, what's not, not to take little things for granted, not to take people for granted. Things like that. I think I've come away with a much fuller grasp on the human experience and what life is really all about."

Off the track, Hinchcliffe has built up his personal brand since joining the IndyCar series in 2011. He's the self-proclaimed mayor of "Hinchtown" and invites fans to become "citizens" on his personal website.

In addition to last year's high-profile turn on "Dancing with the Stars," Hinchcliffe has appeared on "Celebrity Family Feud" and played himself on the crime-solving series "Private Eyes." Hinchcliffe has also done regular broadcasting work, developed his own beer brands – the Hinchtown Hammerdown and The Bricks – and is involved in a Toronto-based video production company.

It's all part of the Hinchcliffe package, something he has worked hard to develop in a sponsor-driven sport.

"Without the sponsor, there's no car," he said. "So you could be the best driver in the world but if nobody wants to sponsor you, it doesn't really matter. So I always put a lot of emphasis on the off-track side of it, creating the brand and being an ambassador, and someone that companies would want to get behind and fans would want to support."

As for his on-track side, Hinchcliffe feels he's hitting that "sweet spot" in his career and is ready to peak over the coming seasons.

"It takes a certain number of years in this sport to reach that level of experience, maturity, speed, that sort of perfect combination of everything," he said. "It seems to be that 30-35 range is when you're at your peak. Unless you're (four-time Series champion) Scott Dixon, then you were born at your peak, and you've been at your peak your entire life and you'll probably die at your peak. But most of us don't have that opportunity.

"I generally feel like I've been driving better than I ever have." 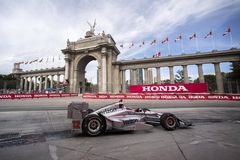