Heading into the final 20 laps of his Formula One debut, Lance Stroll appeared to be finding his stride, and showing why, as the youngest driver on the circuit, he was not out of place.

Following a series of mishaps in training that gave him a rocky entrée into auto racing's toughest discipline, the 18-year-old rookie from Montreal was settling down and getting faster.

Two-thirds into Sunday's 57-lap Australian Grand Prix, Stroll produced his fastest lap of the day in 1 minute 29.389 seconds. It was slower than the 1:26.638 Ferrari's Sebastian Vettel, the eventual winner, produced in his fastest lap. But it was a good sign for the Canadian.

The fact that Stroll appeared to be getting quicker – and more comfortable – as the race wore on suggested he was adapting well to the physical demands of an F1 race.

A mechanical problem believed to be a broken brake disc put an end to his race at Lap 40, while sitting in 13th place. Stroll said he touched the brake pedal on his Williams car and noticed it was not responding properly, forcing him to pull off the track.

"I believe it was a disc failure, but we need to check," Stroll said. "I just hit the pedal and it went long, and couldn't stop. So it's actually quite lucky it happened in a place with a bit of runoff or else it probably wouldn't have been so pretty."

Melbourne is the first stop on the 20-city F1 circuit and it typically sees more mechanical problems emerge than other races, as teams iron out the wrinkles on their new cars for the rest of the season.

But the added velocity of the new faster cars used in F1 this year, with wider tires and more down force, is expected to tax their mechanics in different ways. Some observers suggested the disc problem could be a sign of the faster car, and that some teams will have to bolster their brake systems. Seven of the 20 cars qualified for Sunday were forced to retire because of a variety of mechanical issues.

While it was not the race Stroll wanted, Vettel's win may signal a more competitive F1 season as a result of the new car changes. Mercedes, which dominated the field last year under the previous rules, could not keep up with Ferrari. Mercedes drivers Lewis Hamilton and Valtteri Bottas placed second and third, respectively.

The lead-up to Stroll's debut was less than ideal for the young driver, who is the first Canadian in F1 since Jacques Villeneuve left more than a decade ago.

After going off the course in training runs a few weeks ago, Stroll logged a promising first day of practice on Friday, only to be hindered Saturday when he lost control on a corner, and his rear wheel slammed into a cement barrier.

He would refer to it later as a "little tap," but it was costly. Williams had only a few hours to nurse the car back to race shape for qualifying, and needed to replace his gearbox. Under F1 rules, the gearbox substitution forced Stroll to take a five-spot penalty, which put him at the back of the 20-car grid for Sunday.

When the race got going, it appeared Stroll's poor luck might turn positive. Heading into the first turn, he asserted himself on the inside and pulled ahead of three drivers. But the smoke streaming off Stroll's front tires as he navigated the bend was not a good sign. The sudden braking wore a flat patch on his front right tire, forcing him to pit earlier than expected. When he emerged, Stroll worked his way up to 13th place before the brake disc gave out.

"We had a good start. We were risky – I didn't plan on it being so risky – but there were some guys who braked quite early in front of me and I managed to gain some places … then we managed to have a surprisingly good race until the brake failure," he said.

The race helped answer one of the key questions hanging over Stroll: At his age and relative inexperience, how would the rookie driver, who's been called a prodigy since winning GoKart races at the age of 11, handle the rigours of an F1 race as it wore on?

It's at those latter stages that drivers are their most fatigued, and are most prone to mistakes. The faster cars this season, which expose the drivers to more G-force, are only expected to make the races more gruelling. Stroll comes to F1 after winning last year's title in Formula 3, a stepping stone to F1, but the races this season will be up to three times longer.

His first race was reminiscent of former F1 champion Jenson Button, who also started at the back of the grid when he made his debut for Williams during the 2000 Australian Grand Prix. Button, who was 20 at the time, was forced out of that race at Lap 46 with mechanical problems. Stroll – who turned 18 in October – is now the second-youngest driver to debut in F1, after Red Bull's Max Verstappen, who was six months shy of his 18th birthday in 2015.

"I think there was a lot of positives to take out of this weekend," Stroll said. "For sure some negatives that affected our results but, all in all, I think it wasn't a bad weekend."

Looking ahead to the F1 race in Shanghai in two weeks, he said, "I'm really looking forward to the next one. I think it was good to break the ice this weekend." 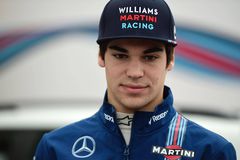 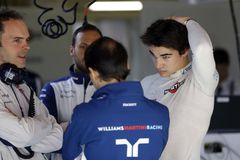