Eugenie Bouchard was all smiles on the Toronto waterfront Wednesday, taking part in a clinic with young kids, hamming it up with fellow Canadian tennis star Milos Raonic, and engaging with fans and spectators alike.

There were no signs that her unexpected season-long slump has got her down.

Bouchard was the talk of the tennis world in 2014 after reaching the semifinals at the first three Grand Slam events, including a trip to the Wimbledon final. She won her first WTA title at the Nuremberg Cup last year and finished the season ranked seventh in the world.

Everything seemed to be lining up nicely for the 21-year-old from Westmount, Que. In addition to her on-court success, she signed with sports management powerhouse WME-IMG to help maximize the value of her brand and expand her presence in the fashion industry.

Bouchard appeared primed to take things to the next level on and off the court. Instead, her 2015 season has simply been a disaster.

It's hard to pinpoint the reason why she has managed only a handful of victories this year. She may still be adjusting to new coach Sam Sumyk. Expectations have been much higher and Bouchard has battled an abdominal injury in recent weeks.

She said Wednesday that's she's feeling better, is back training and is not paying attention to the critics.

"It's been interesting for me to see how when I started doing well, how everyone jumped on the bandwagon or whatever – building me up so much," Bouchard said. "And then to see how they would break you down so much as well, so it's just how the media is, to always have a story and things like that. I just separate myself from that.

"I know what I do and I know what I believe in. It's hard not to hear it or see it, but [I try] to just kind of give it some distance and not really worry about it."

Bouchard's season began with a quarter-final loss to Russian star Maria Sharapova at the Australian Open. It has been a steady decline since.

She lost in the round of 16 at her next two tournaments, fell to a No. 113-ranked qualifier in Miami and lost to a 66th-ranked opponent in her first match at her next tournament. That was followed by a pair of Fed Cup losses and opening-match defeats in five of her next seven events.

Bouchard recently slipped 14 positions to No. 26 in the world rankings.

"I'm definitely hard on myself so if I do have a bad loss, I'm like 'Well, I completely deserve this.' You know what I mean?," she said. "But there definitely are some harsher critics than others and so-called haters and things like that. But I think it's all part of the job so you know, bring it on."

She'll try to turn things around at the Aug. 8 to 16 Rogers Cup at the Aviva Centre in north Toronto. The men's tournament will be held Aug. 7 to 16 at Montreal's Uniprix Stadium.

Making things even tougher for Bouchard is that her seeding will be much lower given her recent slide in the rankings. She may have to play top players earlier in the draw and the 56-player field is expected to be quite deep.

As for the 24-year-old Raonic, he's still limited due to a right foot injury but is planning to resume on-court training next week. The world No. 8 from Thornhill, Ont., was moving well around the temporary court atop a barge docked along the Lake Ontario shoreline.

He hit some balls with youngsters from local tennis clubs and was joined by Bouchard for some easy rallies under the bright afternoon sunshine.

"She's dealing with it and she's dealing with it well," Raonic said of Bouchard's slump. "It's definitely been tough but I'm sure she has all the answers and the team around her that are giving her the right kind of direction. Normally it's the hard work that gets you back on track."

Bouchard admits she's not a very patient person. But she feels that she's been forced into using patience to try to help her game.

"In my situation, I feel like I didn't have much of an option in the sense like, okay, I lost a couple matches and still had to keep going," she said. "I just kind of knew it would still be a long road to try to improve my tennis and improve my match play. It just didn't really give me much of an option. I was just like, okay, I have to put my head down and keep working, keep working and have the belief that it will come." 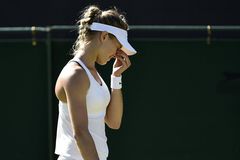 Kelly: Bouchard should stay away until she finds her game
June 30, 2015 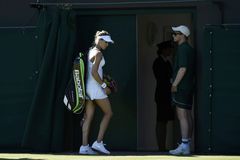