Ontario's Rachel Homan refused to lose a third time to one team at the Canadian women's curling championship.

Homan reclaimed the Canadian title with an 8-6 win in an extra end over Manitoba's Michelle Englot on Sunday.

"That's an unbelievable win by my team," Homan said. "That's the hardest win we've ever fought for I think."

At 27, Homan is the youngest skip, male or female, to win three Canadian championships.

Homan, third Emma Miskew and lead Lisa Weagle out of the Ottawa Curling Club won the Scotties Tournament of Hearts in 2013 and 2014. It was the first Hearts win for second Joanne Courtney.

They'll represent Canada at the women's world championship March 18-26 in Beijing. Homan has yet to win a world title after bronze and silver in two previous appearances.

"I can't wait to put the Maple Leaf on," Homan said.

Ontario had lost to Manitoba in both Friday's Page playoff game between the top two seeds and also to conclude their preliminary rounds Thursday.

Up 6-4 coming home without hammer, a mistake by Miskew peeling a guard in the 10th had Manitoba setting up for three points and the win.

Homan played defence with a double takeout on her last shot, so Englot drew for two to send it into an 11th end.

Ontario laying two at the top of the eight-foot rings, Englot drew to the back of the four-foot rings with a centre guard for partial protection. Homan raised her own counter to clear it for the win.

"Obviously the nerves, the adrenaline was pumping like crazy," Homan said. "It was almost worse for the 10th-end shot."

Homan stole one in the ninth for a two-point lead. Englot twice failed to peel Ontario's shot stone welded on the button after a series of freezes.

Homan came around a guard in the eighth end tapping Manitoba's shot stone to lie two on the four-foot rings. Englot's draw attempt wrecked on a guard, leaving Homan an opportunity to draw for three.

But Homan also ticked on a guard to settle for two and a 5-4 lead. Manitoba stole single points in the fifth and seventh ends to go up 4-3.

Ontario had fallen behind early and chased in their earlier losses to Manitoba, but a show-stopping double takeout by Homan in the second end put her in the driver's seat early in the final.

Instead of safely drawing in for one point, Homan opted for the riskier double takeout hitting one thin and rolling to tap out the other.

She executed it perfectly to score three and lead 3-1 as the Meridian Centre roared its approval.

"It was an incredible game," Englot said. "I gave up the three early and had to battle back from there and unfortunately didn't quite make it.

"We took her to last rock and made her make her last shot."

Homan's team was the first to claim a berth in December's Olympic trials in their hometown when they won the 2015 Canada Cup.

Reigning Olympic champion Jennifer Jones also has one with the remaining seven women's teams to be determined.

The trials winner wears the Maple Leaf at next year's Winter Olympics in Pyeongchang, South Korea.

Homan's team has structured their curling and, recently, their lives around being that team. They've all stepped back from their careers and curtailed their social lives in pursuit of winning trials.

The 2018 Scotties Tournament of Hearts will be held in Penticton, B.C. 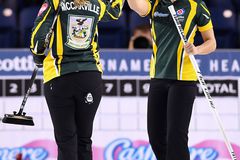 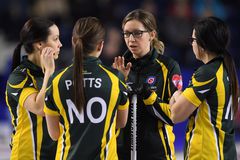