A little gamesmanship, a celebrity chef added to the mix, and a stirring finish paid huge dividends all around when Creator came through in the Belmont Stakes.

Here's how it worked:

Preakness winner Exaggerator came into the $1.5-million (U.S.) Belmont as the favourite and one of many in the field who rally from well back in the pack, Creator among them. A fleet front-runner to set a fast early pace could be a huge help.

Enter Gettysburg. Also owned by WinStar, but trained by Todd Pletcher, who already had two horses in the race, Gettysburg fit the bill as a quick starter. Before he was entered, he was sent from Pletcher's barn to Creator trainer Steve Asmussen's.

Meanwhile, Bobby Flay smacked down some dough and became a co-owner of Creator.

As it turned out, one of Pletcher's two horses in the race, Destin, was on the short end of a thrilling finish. Destin had the lead well into the stretch when Gettysburg dropped back after a mile, but Creator moved closer with every stride and won by a nose, the slimmest margin possible.

"I shouldn't even be sitting here," Flay said at the post-race news conference. "The only thing I did ... I certainly was cheering the loudest in the entire racetrack, and maybe I gave that last little head bob, but that's about it."

Some extra candy and carrots go to Gettysburg, too.

"He needs to be rewarded, and pampered a little bit," Asmussen said Sunday morning at Belmont Park. "He was a valiant horse on the lead. He showed [in the Arkansas Derby] that he's not a patsy by any means, that it will take a lot to wear him down. He carried them a long ways yesterday."

Creator earned $800,000 for his owners to boost his bankroll to more than $1.5-million with his third victory in 10 career starts. It was the first Belmont win for Asmussen and jockey Irad Ortiz, Jr.

"I watched the replay multiple times. I thought it was a great race," said Asmussen, who also won the Preakness twice, with Curlin and Rachel Alexandra. "I thought Irad did a masterful job with him and with every decision he made. I really thought the horse tried to win late. He just really, really laid out there and dug in, and I personally feel very fortunate for his effort."

This is perhaps the most rewarding year of Asmussen's career. The 50-year-old trainer will be inducted into racing's Hall of Fame at Saratoga in August, and his wife, Julie, recently received news that her cancer has gone into remission.

Exaggerator, meanwhile, finished 11th in the field of 13 in the final leg of the Triple Crown. He, too, raced well behind the leaders, but when he tried to move into contention around the turn, he just didn't have the same finishing kick he displayed in winning the Santa Anita Derby and Preakness.

"He's good. Walked him myself about 6:30 this morning, and he's his same vibrant self," trainer Keith Desormeaux said. "He's bright-eyed, ate up last night and maybe he's a little more subdued than usual, but that stands to reason. He still has that confident look in his eyes, so we're good."

The trainer said he thinks Exaggerator didn't like the deep, sandy track. He pointed out that after wins at Santa Anita and Pimlico, the colt had already cooled down by the time he returned to the winner's circle.

This time, "before he got back to take the saddle off, he panted and gasped for air and looked a little fatigued for 45 minutes after the race," Desormeaux said. "I can guarantee the [Triple Crown] races didn't take a toll, but he struggled with the track. He gave us his life to win and it got to him. I'm settling on he didn't get a hold of the track."

For the fifth time in the past eight years, a different horse won each of the Triple Crown races. Nyquist won the Kentucky Derby, ran third in the Preakness and did not run in Saturday's Belmont.

With no Triple Crown on the line after American Pharoah swept the Derby, Preakness and Belmont last year, the announced crowd was 60,114. Last year, the attendance was capped at 90,000.

And now, it's on to the summer season, with a possible meeting between Creator and Exaggerator in the Travers Stakes at Saratoga. 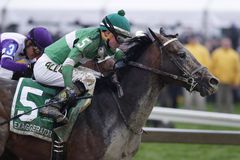