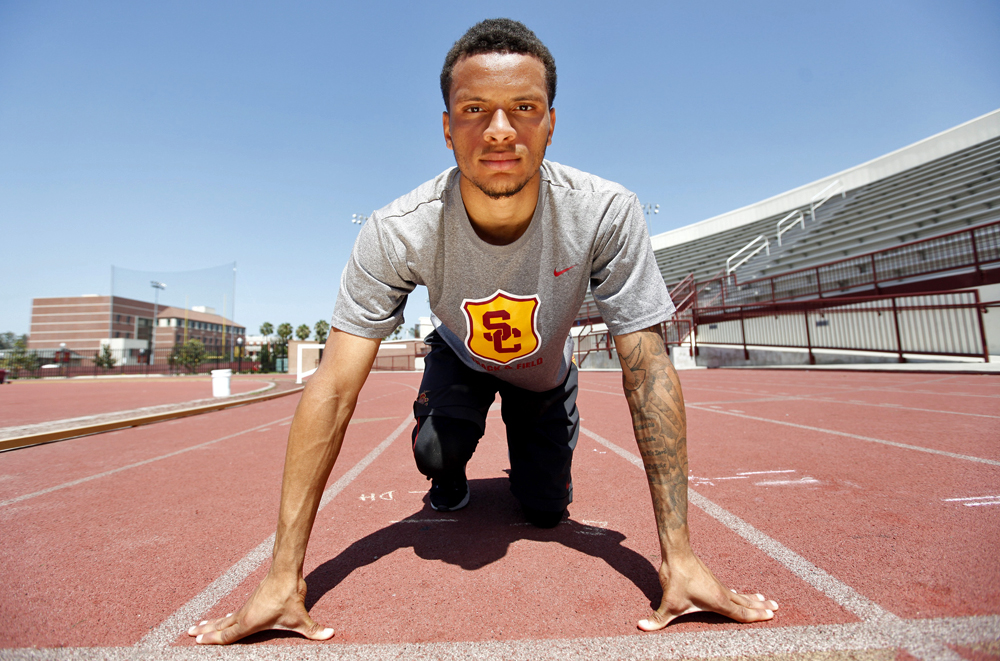 (Photo: Jill Connelly for The Globe and Mail)
QUICK TO THE SCENE
Despite coming to the sport late, Andre De Grasse has emerged as Canada’s fastest man and a legitimate threat to the world’s front-running sprinters. David Ebner tries to catch up with the rising star

The repeated crack of the starter pistol punctuates the quiet morning. Training at the University of Southern California, sprinter Andre De Grasse readies in the starting blocks. At the sound of the gun, he springs forth and flies 20 or so metres down the track before slowing and turning around to do it again.

It’s a warm Friday in mid-June. Mr. De Grasse smiles and jokes with his USC track teammates during a light practice. He has broad shoulders and a thin waist. He’s 5 foot 10 and 155 pounds. There is zero outward indication that Mr. De Grasse, one week earlier, had run two of the fastest races in history.

In the 1990s, Canada was a sprinting power at the Olympics and world championships. Now, Mr. De Grasse, a 20-year-old from Scarborough, Ont., is a prodigy, a budding superstar who could vault the country back to the pinnacle of track’s glamour event, the 100-metre dash – a contest of human physical capacity in one of its most raw, unadorned forms.

In mid-June, at the U.S. collegiate NCAA track and field finals in Oregon, Mr. De Grasse won the top two sprint events in astonishing times – 9.75 seconds in the 100m and 19.58 seconds in the 200. Both were faster than any previous mark by a Canadian, although they were not booked as official records because they were aided by a slight tail wind. 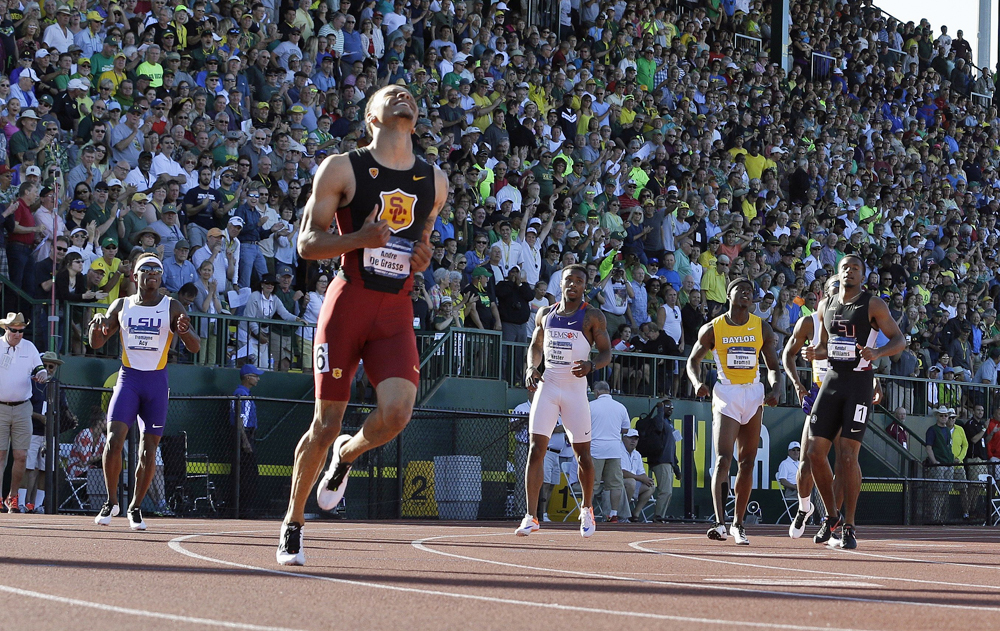 He was not the favourite, but 20-year-old Andre De Grasse won the 200-metre dash at the 2015 NCAA Track & Field Championships anyway. (Photo: Don Ryan/The Associated Press)

Mr. De Grasse already holds the Canadian 200m record, which he set in May, and this month he aims to etch his name in the 100m record book, eyeing the mark of 9.84 seconds first set by Donovan Bailey while winning gold at the 1996 Summer Olympics.

The quest begins this week in Edmonton at the Canadian Track and Field Championships, and then Mr. De Grasse will be a star attraction in both events at the Pan Am Games in Toronto. In August comes the acid test of his early career, up against Usain Bolt and other stars at the World Championships in Beijing.

Mr. De Grasse is an overnight success three years in the making. He has run track only since the spring of 2012, when he was in Grade 12 and agreed to race on a whim. His earliest coach, Tony Sharpe, believes Mr. De Grasse has the most natural talent of any sprinter he’s ever seen.

“I’m capable of competing against the big dogs,” says Mr. De Grasse, sitting in the bleachers before practice here. He has an easy laugh, a bright warm smile. “Canadian sprinting hasn’t been around for what? Maybe 15 years. No one knows about Canada any more. Everyone’s hearing about the U.S. running fast, Jamaica running fast. I want Canada to be back up there.” 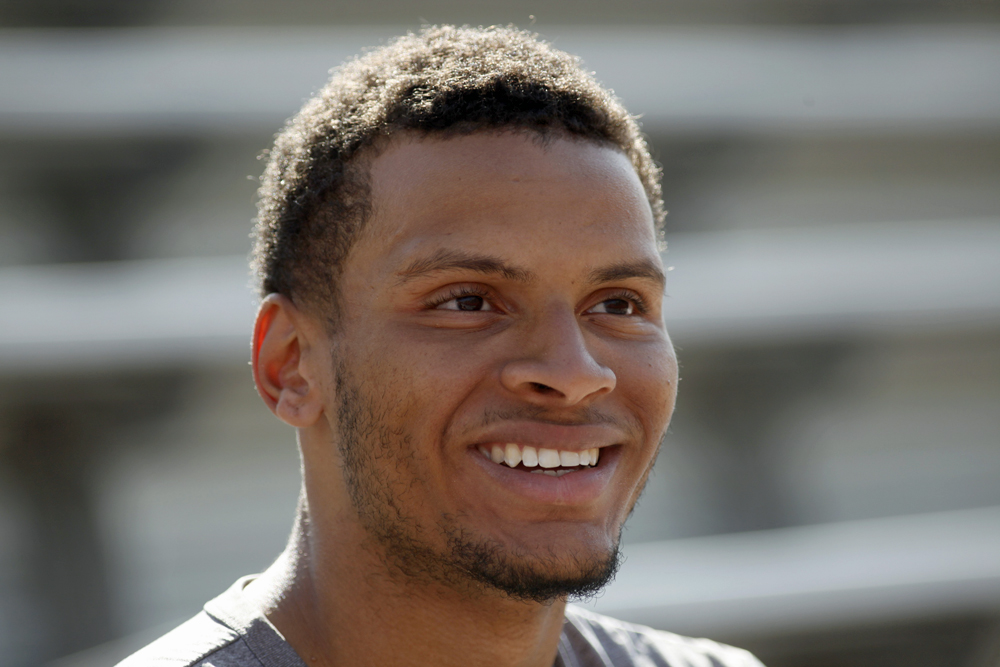 (Photo: Jill Connelly for The Globe and Mail)
‘Everyone’s hearing about the U.S. running fast, Jamaica running fast. I want Canada to be back up there in the conversation.’
Andre De Grasse

“I’ve been waiting since the day I retired for the next great Canadian sprinter,” Mr. Bailey says. “Andre has the ability to go into a big competition and not be afraid of anybody. I love the fact he’s not afraid. Love it.”

The first thing Andre De Grasse wanted to be was a basketball player. He felt he had a good shot at U.S. college basketball.

His parents had been sprinters when they were young. He was raised by his mother, Beverley De Grasse, who grew up in Trinidad and Tobago. “I was always fast,” Beverley says. She moved to Toronto in her mid-20s. Andre was born several years later, on Nov. 10, 1994. His father, Alex Waithe, grew up in Barbados and moved to Canada as a teenager.

In high school, the boy was wayward. He remembers thinking, “I’ve got to change my life and hang out with positive people that are doing good things.”

Ms. De Grasse says, “He’s always been a brilliant kid, but at the time, Andre wasn’t totally focused on where he wanted his life to go.”

A full sleeve tattoo on Mr. De Grasse’s left arm testifies to the faith that carried him through. Mr. De Grasse is Catholic, beliefs his mother instilled. There’s a prayer on his inner forearm and the word “hope.” Canada, too, was in his heart. There are two maple leaves on his biceps.

His future unfurled in 2012. He tagged along to a high school track meet with a friend. Mr. De Grasse ran the 100m in borrowed track spikes, basketball shorts and a T-shirt. He didn’t use the starting blocks and instead ran from a standing start. He finished second in 10.90 seconds.

In the stands, Mr. Sharpe took notice. The Olympic medalist turned coach was at the meet to see one of his Speed Academy runners. Who’s that? Mr. Sharpe asked one of his runners. “They call him Tip, he plays basketball,” was the response. 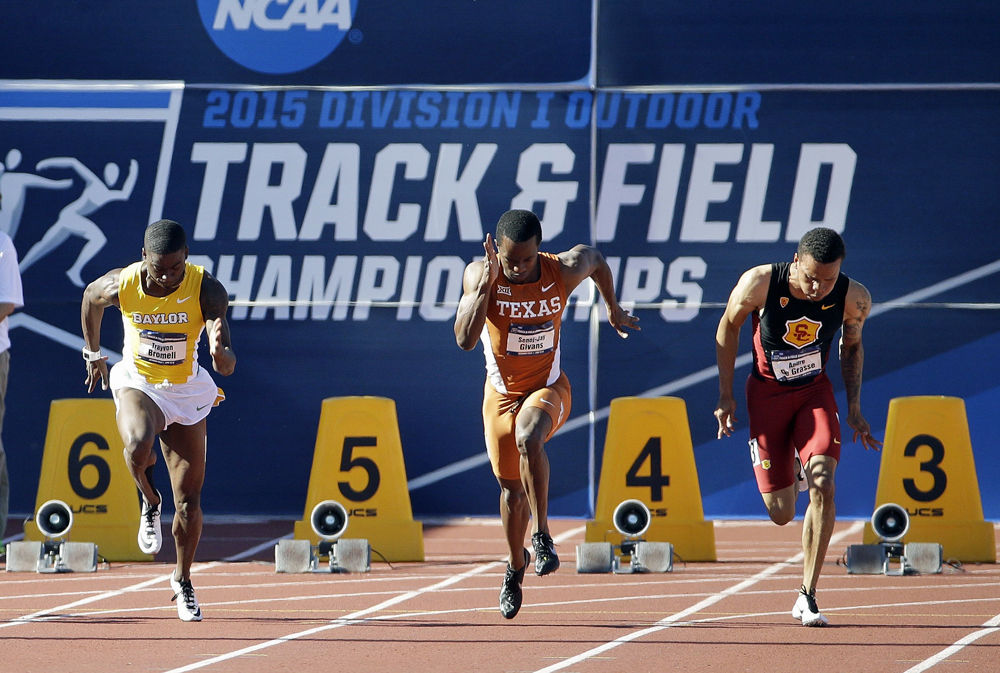 De Grasse, right, springs from the blocks with other finalists in the 100-metre dash. Just three years ago, he had never tried sprinting and was instead determined to play basketball. (Photo: Don Ryan/The Associated Press)

Within days, Mr. De Grasse was in training. Soon after, at a national meet in Toronto, where organizers were skeptical he belonged in the field and nearly didn’t let him race, he won the 100 in 10.59 seconds.

When it was time for the podium, Mr. De Grasse didn’t know where to stand.

“As far as raw ability, I’ve never seen anything like it,” says Mr. Sharpe, who in the 1980s ran against the likes of Carl Lewis and Ben Johnson. “People have looked at me like I’m kind of stupid sometimes. ‘Sharpe, you’re talking crap.’ Well, hello!”

Mr. De Grasse’s trajectory was vertiginous. He ran for two years at a junior college in Coffeyville, Kan., and just finished his first year at USC. There is pressure from agents to leave school and turn pro. Mr. De Grasse mulls it, the potential to make a six-figure income, maybe even $1-million (U.S.)-plus. Track is not a surefire way to get rich, but the best runners do well. The very top, Mr. Bolt, is among the world’s highest-paid athletes, at more than $20-million a year.

“Track and field has never seen a kid like this,” says Craig Perry, coach at Coffeyville Community College. “People want to say Usain Bolt came out of nowhere, but Usain Bolt was running world-class times when he was 15 and 16 years old. When Andre De Grasse was 15, 16 years old, he was getting into trouble and playing basketball.”

‘THE WAY HIS LEGS MOVE IS ART’

The history of sprinting success in Canada stretches back more than a century, but the sport did not truly flourish until Canada liberalized its immigration laws in the 1960s. Mr. Johnson, Mr. Sharpe and Mr. Bailey were born in Jamaica.

Worldwide, track’s last heyday was in the drug-fuelled 1980s. Mr. Johnson’s victory at the 1988 Olympics in Seoul was a moment of shared coast-to-coast glory. The gutting positive steroid test three days later unleashed a wrenching national inquiry. When Mr. Bailey and the men’s 4x100m relay team won gold in 1996, Canadians celebrated, but Americans didn’t care, and Mr. Bailey ran under the cloud of Mr. Johnson’s sins.

The men’s 100m is the No. 1 event at the Olympics, but only Mr. Bolt’s name is widely known outside the sport. Athletic kids don’t dream of track fame. Even Mr. Bailey was an accidental sprinter; like Mr. De Grasse, he loved basketball and turned to track in his 20s.

The drug question lingers. For Canadians it is indelible, a fading but never gone part of our national memory. “Great sprinters will always have skeptics talking smack,” Mr. Sharpe says. Mr. De Grasse, born six years after Seoul, does not appear bolstered by drugs. He is quietly emphatic: “Naw. I don’t associate with those types of things. I would never do that stuff. That’s not me. I like to play fair.”

What makes Mr. De Grasse such a promising sprinter is both tangible and elusive. He is smaller than most of his elite predecessors, a little like Frankie Fredericks, a star from Namibia in the 1990s. 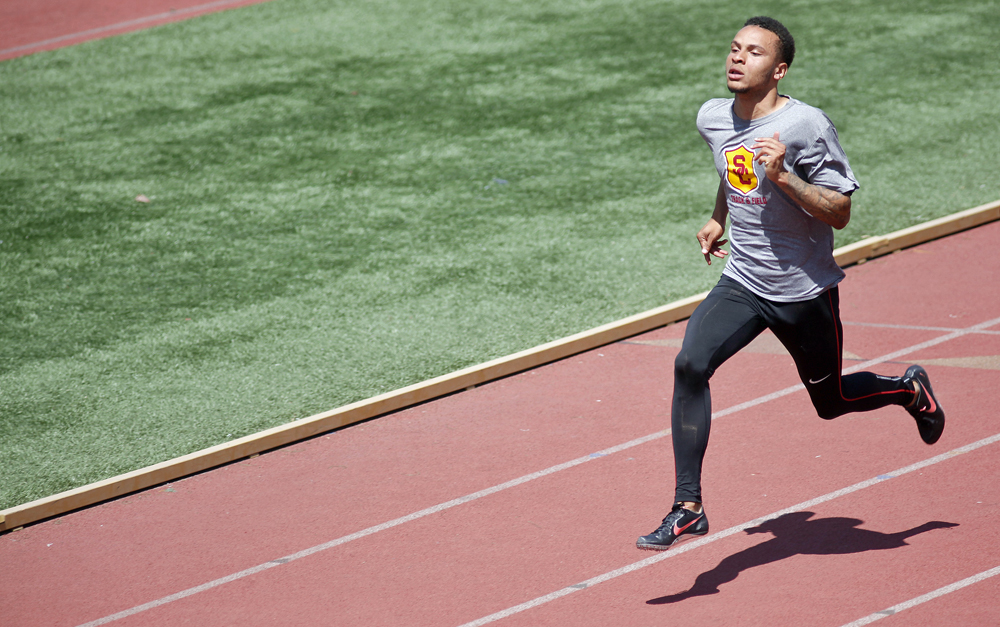 Andre De Grasse during a June training session at the University of Southern California in Los Angeles. (Photo: Jill Connelly for The Globe and Mail)

Mr. Bailey calls it this way: “He gets a lot of air under him. He knows that if anyone is within reach, he will absolutely get them.”

The spotlight has swivelled to Mr. De Grasse. It will get more intense. “He’s a reserved and quiet kid,” says his mother. He handles it with grace. “He doesn’t have any airs,” Ms. Smith Gilbert says.

“I’m just having fun,” he says. “This is all fun to me. This is all new to me. It’s not like basketball, where I had guys relying on me. I was constantly under pressure as a point guard. This sport is more relaxing to me. It’s myself.” 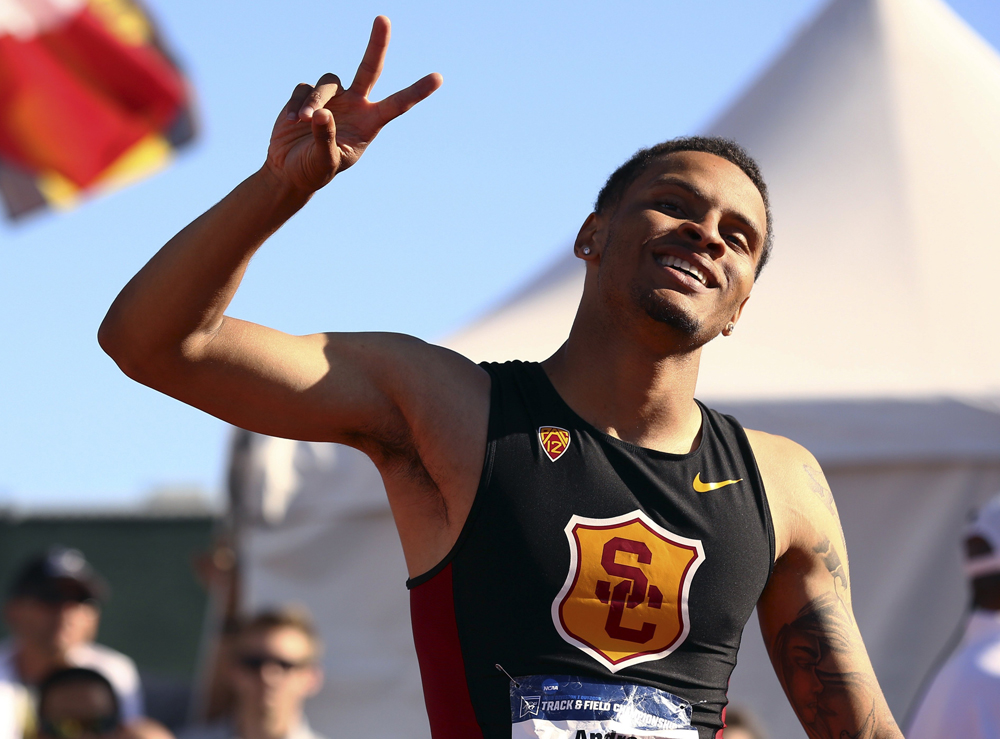