Talented kids by the hundreds have clicked through the turnstile at Club de tennis de l'Ile-des-Soeurs, all carrying tennis bags stuffed with rackets, sneakers and big ambitions. Many have oozed swagger and potential, but who could predict that one of them would make it to a Wimbledon final by age 20.

A pint-sized Eugenie Bouchard would troop into the club on Nun's Island, south of downtown Montreal, usually with her mother and twin sister Beatrice. The girls began tennis there at age five, in an introductory class that got the little ones moving first with hoola hoops and balloons. While her sister and the other youngsters found whimsy in that, to Bouchard it felt like a humdrum opening act, as she burned to get at the racquets and yellow balls.

By now, even casual fans know about Bouchard's upbringing in the affluent Montreal enclave that is Westmount, Que., the fact her parents named her and Beatrice after the Duchess of Kent's daughters, and she honed her talents between Montreal's national training centre and Plantation, Florida, where she has worked with coach Nick Saviano since she was 12. What's less discussed is the quality that sets her apart.

Those who have rubbed elbows with Bouchard longest cite a confluence of factors that explain her meteoric rise, starting with obvious athletic talent. But more so, they stress, since her earliest days in the sport, she has had a relentless and uncompromising devotion to winning Grand Slam titles, and a fearless belief in herself versus any opponent. Despite her eye-catching looks, smiling articulate persona and growing global celebrity, Bouchard is a stone-cold killer on the court.

"Genie had this competitive streak and was never satisfied, always wanted to hit more balls," said her mother Julie Bouchard in a phone interview with the Globe and Mail last summer. "So it became a growing commitment, two hours a week, three hours a week. By grade 3 she was going every day, in another year, she was starting to leave school a bit early so she could do a private lesson before the group. Then she went to regular school until the middle of grade 7, and then we moved to Florida. It was a long slow process but the interest and fire and competitiveness were always there."

At nine, Bouchard won a qualifying event in Montreal to get into a 12-and-under tournament in France. The fire intensified then within the youngster.

"I beat 12 year olds to get there, and it really opened my eyes about what I could do," Bouchard recollected to the Globe during an off-season interview in Florida. "It was the first time I had ever left North America and I was doing it to go play tennis because I earned my way there. In France, I realized I want to travel the world and play tennis as a career."

Her confidence struck Ralph Platz the first time he met her at an under-12 national selection event in Edmonton, a man who become her coach on Canada's national junior team.

"I went over and asked what her name was. She looked at me like she was almost disgusted that I didn't know who she was. She put her hand on her hip and said 'I'm Eugenie Bouchard', and walked off," said Platz, who coaches rising talents at Montreal's National Tennis Centre.

When the players at the camp were asked about their goals, Bouchard declared "to win Grand Slams."

Platz is reminded of the 2005 Junior Fed Cup World Championships in San Luis Potosi, Mexico, when Bouchard was training with the Canadian girls' team and they were doing wind sprints. One of the other players kept winning.

"She wasn't having it," said Platz, who remembers that Bouchard kept asking for one more race, over and over again, wanting to keep going until she could win one. "At one point I just had to stop them."

And how did Bouchard perform on the court that week?

"She won every match she played," Platz said.

The highly-reputed focus extended beyond the court. Michael Cristofaro, the principal of Westmount High School, remembers a driven young woman with outstanding commitment and determination, but who was nevertheless sociable. The school offered a flexible curriculum that allowed her to travel for tennis; she didn't complete her diploma at the same time as her peers but enrolled in a distance education program, determined to finish.

"She had pretty much the same personality then that she has now," said Cristofaro.

The same personality carried through, as did the same dream. She admits to looking at her twin sister sometimes to see a very different life from her own.

"We're very different, but very close, and because she is exactly my age, I see what my life would be like if I wasn't playing tennis," said Bouchard, who also has a younger sister and brother. "She's normal, I'm abnormal – that's how I see it. It's cool having someone exactly your own age in your family."

The family's schedule was often dictated by Bouchard's growing commitment to training with Saviano, who was also coaching others destined for the WTA, like American Sloane Stephens and Brit Laura Robson.

The junior ranks are brimming with players who believe they're destined for the pros, but only a select few make it out. Juniors have to call their own lines when competing there, and some desperate ones cheat and intimidate, often those from less-fortunate countries who believe tennis is their only way out.

"You have to get through those years – imagine little league or soccer without an umpire – tennis is like that when they call their own lines at a young age," said her mother. "But it toughened her up."

Coaches often say that from an early age, Bouchard had a unique ability to take in coaching without complaint.

"She was special, very unique, in her desire to receive information at an early age – to really want information – then apply that information right away," said Sylvain Bruneau, Canada's Fed Cup coach, who has had a part in Bouchard's development since she was 12. "She's always been relentless about improving... she has a really special mind."

She spent the last five weeks of 2013 working in the gym, racing against herself up hills on sandy beaches and honing her game on courts around Southeast Florida from Plantation to Boca Raton.

"A lot of athletes just trust and don't question what we plan to do in the gym, but Genie would challenge me on a daily basis "why am I doing this exercise, how will this make me better?', because she really wants to understand, and then she totally buys in," said Andy Hanley, a strength and conditioning coach who worked with her at The Chamber, a Florida gym that also has NFL clients. "I never fear for her when she's in competition, because she's competing against herself every day in training, and the expectations she has for herself are so high."

Bouchard is striking as opportunity knocks, chasing after the top prizes on a WTA Tour that is ripe for a new headliner. At the top of the tennis world, every athlete is gifted technically, but what separates good from great are intangibles like toughness, confidence, and relentlessness. She's sometimes blunt in her post-match press conferences. Does this rapid success surprise her, she's repeatedly asked.

No, she often says in a frank way. She's been chasing this since she was five. She doesn't feel out of place beside the more experienced women. She feels deserving.

Bouchard's old coach Platz offered this insight while explaining Bouchard's fearlessness: working with one of his current pupils recently, he stopped her to point out that the situation called for aggressive play. The player went for an audacious shot and missed, then became more conservative.

"I told her that in that situation Genie would be aggressive, even if it didn't work, and that she would keep being aggressive until it did, until she could make the shot," Platz said. "Genie will be aggressive in a given situation because it's the right thing to do, and she'll keep doing it." 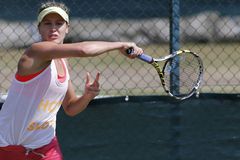 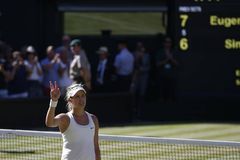 Follow Sean Gordon and Rachel Brady on Twitter @MrSeanGordon @RBradyGlobe
Report an error Editorial code of conduct
Due to technical reasons, we have temporarily removed commenting from our articles. We hope to have this fixed soon. Thank you for your patience. If you are looking to give feedback on our new site, please send it along to feedback@globeandmail.com. If you want to write a letter to the editor, please forward to letters@globeandmail.com.
Comments