The sliders slapped "For Sale" stickers on their helmets to attract a corporate sponsor just a few months before the 2010 Vancouver Olympics. The strategy worked, but that sponsorship money has run out with the 2014 Winter Games in Sochi, Russia, on the horizon.

Alex Gough, Sam Edney and the rest of the luge team got out their "For Sale" decals and signs again. They invited the media Tuesday for their first training runs of the season at Canada Olympic Park.

"Countries like Germany have such a huge pool of athletes and the corporate backing we haven't been able to secure," Gough said. "Our previous sponsor gave us that and gave us that edge. Now that partnership has ended, we really need someone else to step up.

"It worked last time so we figured we'd give the "For Sale" thing another try."

The difference between Canada's luge team pre-2010 and pre-2014 is that it is capable of winning the country's first Olympic medal in the sport in Sochi. Prior to 2010, luge was the weakest of Canadian sliding sports behind bobsled and skeleton.

Gough, a 26-year-old Calgarian, has broken up German domination of women's singles with a pair of World Cup victories, nine other World Cup medals and two world championship bronze medals over the last four years.

The team relay – which will makes its Olympic debut in February – is also fertile ground to produce a Canadian medal.

Gough, Edney and the men's doubles team of Tristan Walker and Justin Snith, all from Calgary, won silver at this year's world championship and bronze in 2012.

"For the first time ever, we're going to be poised to win a medal," said Tim Farstad, executive director of the Canadian Luge Association. "I think it would be great for a sponsor to come along for the ride."

The luge team raced toboggans down a snowy Calgary hill wearing their "For Sale" stickers in February 2009. Gough now called that a "creative stunt."

Within a day, the team was contacted by the investment company Fast Track Capital and a five-year deal worth just over $1-million was reached. However, the company was unable to fulfil the final year of its commitment.

A former luger and president of an oil and gas company awarded cash bonuses to athletes for podium and top-10 finishes for two years after the 2010 Games, but those incentives no longer exist.

The luge team will get $973,000 in funding in 2013-14 from Own The Podium, the organization that directs taxpayer dollars to national sports federations. In the four years between 2010 and 2014, OTP will have directed $3.2-million to the luge team.

OTP money goes to athletes who have demonstrated Olympic and world championship medal potential. Top sliders like Gough and Edney have personal sponsorships, but the CLA needs a team sponsor to fund the next generation of sliders.

The lugers aren't the only Canadian team to lose a title sponsor post-2010. Canada Post ended its relationship with the freestyle team this year.

The bobsled and skeleton teams have been without a title sponsor since 2011 when its contract with credit card company Visa expired. General Motors left Alpine Canada, but the organization brought Audi on board in 2011.

"I know it's tough out there," Farstad said. "We don't expect to be treated any different than anybody else. I know the big sports have lost sponsors. For us, it was just bad luck, I'd say.

"It's not demoralizing. We're in the best situation we've ever been as a sport, so I'm hopeful we'll find a partner out there."

Canada's luge team is currently training in Calgary before heading to a training camp in Whistler. The World Cup season opens Nov. 16-17 in Lillehammer, Norway. The Canadian stop on the circuit is Dec. 6-7 in Whistler.

The luge competition at the 2014 Games starts Feb. 8 with men's singles and concludes Feb. 13 with the team relay. 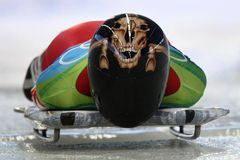