Dick Pound still thinks of himself as the young buck of the Olympic movement, the sprint swimmer who was a 100-metres finalist in Rome in 1960, and won a British Empire and Commonwealth Games gold in Australia in 1962.

But that was a half-century ago, before he became known for more hats than a milliner.

The 69-year-old, Montreal-based Pound, who will be installed as a builder in Canada's Sports Hall of Fame on Tuesday, has built a stellar career as a tax lawyer. He's also been president of the Canadian Olympic Association; the International Olympic Committee's Canadian representative; an IOC executive board member; IOC vice-president; founder of anti-doping authority WADA; chief marketer who brought the IOC into the billion-dollar range for TV rights; a creator of the Court of Arbitration for Sport, which deals with contentious appeals of suspended athletes; and the sheriff who investigated – and called for the expulsion of – corrupt, vote-selling colleagues at the 2002 Salt Lake City Games.

"The TV and the marketing were all positive things, and WADA was a positive initiative. We had pockets of resistance that had to be dealt with … but, generally speaking, they were all positive developments. I don't regard it as a black hat but a white one," he said of the multitude of roles which have made him at times the saviour of the Olympics and the deflater of heroes.

"I don't mind getting into fights with guys like [Lance]Armstrong," Pound said of the Tour de France cycling legend who has been dogged by doping rumours for a decade.

"I'm being introduced as a builder, but one of the things you look back on as an athlete is representing your country in the Olympics. That was certainly a high point, and so was winning at the Commonwealth Games.

"After that, it was a process of someone who drank from the well of volunteer efforts; an athlete who was willing to put back into the well at least as much as I took out."

Pound ran unsuccessfully for presidency of the IOC and Court of Arbitration for Sport. But he shows no sign of slowing down – or of mellowing as he approaches his 70th birthday. He's not about to retire from the IOC and won't be put out of pasture as an "honorary" member until he's 80. In the meantime, he's available for new adventures.

"I'm willing to do any work that's seen as helpful with the current administration. I'd never present myself for anything elective while Jacques Rogge is president. Whatever I said would be seen by the world at large as sour grapes. But once there's a new president … he may see utility in the experience that I bring," Pound said.

A second run at the IOC presidency is not in the cards … it would be "off-message to be 72 years old and run for presidency of a body that's supposed to be about youth," Pound said.

"People ask what would be different if I was president instead of Jacques Rogge. … The only thing I can tell you for sure is that there'd be no Youth Olympic Games. It was marketed to the IOC as our response to juvenile diabetes and sedentary lifestyle. … But we don't seem to have talked to any of the organizations dealing with that problem and it ends up being directed toward people who are already in the sport system. My question is, how does this get one single couch potato away from a computer screen? I think it's a missed opportunity to do something in a segment of the community that requires some help."

One of his remaining missions is to elevate the profile of women in sport. "Over the years, we've been relatively successful in expanding the role of women on the field of play and we'll get 50-50 in the Games in the next few years."

But the sports world has been far-less successful is in getting women to take on the administrative roles. In 2011, IOC figures show women are president of only 4 per cent of national Olympic committees (9 per cent have a female secretary-general) and only 3.2 per cent of international federations have women as president.

Canada has been one of the leaders. The late Carol Anne Letheren was the head of the Canadian Olympic movement "and we've had more females as heads of federations that just about anybody else," Pound said. "The old shibboleth of 'a woman can't do it' is long gone."

A woman could rise to the top of the IOC, Pound said.

"Oh, yeah. It's conceivable … My guess is we'll have another female candidate when Jacques Rogge's mandate is done [in 2013] We had Anita deFrantz [of the United States run]the last time, I would not be surprised if Nawal el-Moutawakel [of Morocco]was a candidate this time."

Neil of Vancouver was one of Canada's best female soccer players for close to two decades. She represented Canada on the international stage from 1991 through 2007, becoming the first Canadian to participate in four women's World Cups. She was capped 132 times as an international, a record when she retired in 2007. She was a four-time COCACAF silver medalist, a Canada Games champion and Pan American Games bronze medalist.

Reid of Montreal is one of Canada's top elite athletes as a three-time Ironman world champion. Known for his work ethic and intensity, he won 10 gruelling Ironman competitions, including his three wins at Kona, Hawaii. He also had three silvers and a bronze at the worlds before his retirement in 2006. 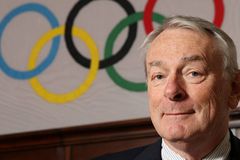