One of the assets Maria Sharapova had to count on in her highly anticipated U.S. Open round-of-16 match with Caroline Wozniacki on Tuesday was her aura as a great player.

A three-time Grand Slam champion, former world No. 1 and 6-foot-2 woman who has an imposing presence, all that was working for her as well as the fact that she was up against a woman she had beaten twice in 2008, a woman who is three years her junior and a woman who does not possess anything close to her champion's pedigree.

It all may have been to her advantage - until the fourth game of the match. Trailing 1-2 and serving at 30-30, Sharapova won a rally with a spectacularly angled forehand cross-court winner. She was ahead 40-30 and had just sent a message to Wozniacki that she was capable of bossing her around from the baseline.

It was almost unthinkable what happened next - Sharapova hit three double faults in a row to lose the game.

In a little over a minute, she had sent a signal of vulnerability that would be impossible for her to overcome.

If there was a chance that Wozniacki could be intimidated, it vanished in that display of abject ineffectuality.

Sharapova would end up with nine double faults, and every second serve for the rest of the match was an adventure, with almost everyone in Arthur Ashe Stadium holding their breath and expecting the worst.

The serve is the engine that drives her game and since her shoulder surgery in October, 2008, it has not been the same.

American great Pete Sampras was one of the best clutch servers of all time. When he was asked how he was able to pull off brilliant second serves in the most pressure-packed situations, his guileless reply was, "muscle memory."

It has to be a huge worry for Sharapova that her original muscle-memory connection with her serve may never be the same post surgery.

She could not have done more or been more conscientious in trying to restore the connection - commuting from her home in Los Angeles to Phoenix five days a week for months on end to get the best possible rehabilitation.

Her return in 2009 was not until May and the rest of the year was sort of written off as a trial run before 2010. Now, the losses to Maria Kirilenko in the first round of the Australian Open, to Justine Henin in the third round at the French Open after leading in the third set, to Serena Williams in Wimbledon quarter-finals after failing to convert three set points in the opening set, and to Wozniacki on Monday, are a serious dose of 2010 reality for her.

"It's a bit unfortunate in the Grand Slams," she said after losing 6-3, 6-4 to Wozniacki, "I had my fair share of chances and didn't take them throughout this whole year in the big events."

The serve was not the whole story for Sharapova, she did have her moments in the rallies from the baseline, but won only 41 per cent of them to 51 per cent for Wozniacki.

There was one encouraging statistic. She had an exemplary 89 per cent (16/18) in net points success rate, and her swing volleys were both bold and efficient.

But Wozniacki, 15-1 at hard-court tournaments this summer, now seems to have some of the gold dust that was speckled on Sharapova when she won Wimbledon in 2004. "I think winning Wimbledon at 17, the reason I look back and am so proud is because I was so fearless throughout the whole tournament," Sharapova said last week. "I didn't care about the situation, I just played tennis."

Somewhat reminiscent of a younger Sharapova, Wozniacki, 20, said after winning on Monday, "I think I'm a really tough player. I never give up, doesn't matter what the score is."

The Dane also has a bit of Sharapova's glamour quotient. While she seldom reveals much in post-match interviews, she did stir up interest on Monday when she said, "I'm so lucky that I am the face of adidas and Stella McCartney and have my own special line that no one else is wearing."

Sharapova has been there, done that. She probably wouldn't want to be back to those days again, except for the fact that it was a much simpler time for her.

The $525,000 (U.S.) Tourbillon RM 027 watch, designed by Richard Mille and belonging to Rafael Nadal, which went missing during the 2010 Rogers Cup in Toronto last month, is believed to have been stolen in the locker room.

It appears other players are not suspected. Because it was a night match, very few would still have been around that late.

There are railed lanes leading into the east gate entrance to the U.S. Open. On Monday, an older woman official was giving instructions through a megaphone to spectators as they arrived and filed randomly into the various lanes.

"Please use all the lines, you're all going in the same lines," the woman barked. "Pay attention please, you're in New York City - not Florida!"

"My level is higher and I have to win these matches. I played against myself, not against her."

On Tuesday afternoon in Arthur Ashe Stadium, it is the rugged Stanislas Wawrinka, hoping to build on his upset of Andy Murray, facing the 6-foot-6 angularity and power of Sam Querrey. That match will be followed by French Open champion Francesca Schiavone against Venus Williams. Their head-to-head is 7-0 for Williams but Schiavone, 30, knows all about bucking the odds after her unlikely triumph at Roland Garros.

The evening session on Ashe Stadium features Samantha Stosur, who played until 1:37 a.m. on Monday to beat Elena Dementieva in a third-set tiebreak, against defending champion Kim Clijsters.

The nightcap match features the Adonis-like Feliciano Lopez against his Spanish compatriot Rafael Nadal. The left-handed Lopez is all beautiful, flowing shots while Nadal is all guts and determination. 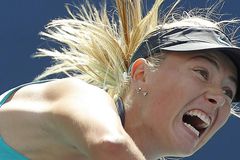