Krista DuChene approached the Scotiabank Toronto Waterfront Marathon on Sunday in a record-setting frame of mind.

Some 2 ½ hours later, after a gruelling event over rain-slicked downtown Toronto streets, DuChene was happy to have just survived the race.

Competing with a sore hip, the 35-year-old athlete from Brantford, Ont., still crossed the finish line as the top Canadian female, completing the course in a time of 2 hours, 32 minutes and 15 seconds.

That was good for a fourth-place finish, well behind the winning time of Mary Davies, the New Zealand native who lives in Ottawa, who covered the 42.2 kilometres in 2:28.56.

The men's race was taken by Sahle Betona Warga of Ethiopia, who broke free from a small group of front-runners heading into the final two kilometres to finish in 2:10.35.

In the 23-year history of the race this was the first time an Ethiopian man had won.

More than 24,000 athletes competed in the various races.

DuChene came into Sunday's race looking for a sub-2:30 finish and perhaps even to challenge the Canadian women's marathon record of 2:28.36, set by Silvia Ruegger at the 1985 Houston Marathon.

"That was the plan," said the 35-year-old mother of three. "You really have to set the bar high. If you set low goals for yourself you achieve them or even worse."

But the inclement weather at the outset of the race and windy conditions that would hinder the athletes as the course took them along the Toronto waterfront, helped to protect Ruegger's Canadian record.

Still, DuChene was looking good, completing the first half of the race in 1:13.39, well under Ruegger's record pace.

"Probably went out too fast in the first half," DuChene said. "We were about 30 seconds [per kilometre] too fast. But you know what, I'm not going to complain. I hung on.

"My hip kind of gave out with about six kilometres to go. It happens. You persevere."

Lanni Marchant of London, Ont., was also considered a threat, along with DuChene, to take a run at Ruegger's record.

But coming off a stress fracture that affected her training for the Toronto event, Marchant just didn't have it on Sunday and wound up dropping out after the halfway point.

Davies said a top-three finish was not in her sights heading into the marathon.

Late in the race, Davies found herself running in second with pre-race favourite Agnes Kiprop of Kenya threatening to extend an already healthy lead.

"At about 39 kilometres I could see the girl and I thought maybe I could catch her. I didn't have much energy left," Davies said.

"It was amazing, My goal was to break 2:30 and I am just over the moon. I felt strong at 40 kilometres when I passed her but kept looking around for her."

In the men's event, Warga was in a group that included countryman Tsegaye Botoru and Kenya's John Kiprotich heading into the final two kilometres when the 28-year-old made his move.

Kiprotich did not do himself any favours when he inadvertently ran past a water station and decided to backtrack so he could get a drink at what was a pivotal point in the race.

"I went back for some water," Kiprotich said. "I was getting tired so I had to heal my body. But when I got back my friends were gone.

Warga was able to hold on for the victory, with Kiplimo Kimutai of Kenya coming from off the pace to place second with a time of 2:11.20.

The replenished Kiprotich fought back to finish in third at 2:11.29.

Despite being the top Canadian male runner, Loiselle was not happy with his time.

"It's good to be the first Canadian, but the goal was to run 2:15 or under to qualify for the worlds," he said. "I gave it my best but my best wasn't good enough today so try it again next time." 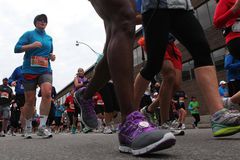 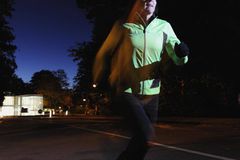 The unsung hero of the marathon, the rabbit
October 12, 2012 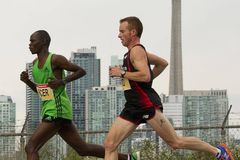