It was one of those wildly unpredictable matches that sometimes happen in professional tennis, with Canada's Eugenie Bouchard and Romania's Simona Halep taking turns at the controls.

It was Halep early, racing off to a 5-0 first-set lead and looking for all the world as if she'd run Bouchard, tennis's new golden girl, right out of the fourth round of the BNP Paribas Open.

But after a visit from coach Nick Saviano to review a few fundamentals – move the feet more quickly, compete harder on every single point – Bouchard turned the match around in a meaningful and impressive way.

The Canadian won eight out of the next nine games to square the match and was up a break in the third set, serving at 4-3 and poised to record a comeback for the ages.

Instead – and at the wrong possible moment – Bouchard played a handful of loose points, Halep regained her flagging composure and it was the sixth-seeded Romanian who pulled out a 6-2, 1-6, 6-4 win to advance to the quarter-finals.

Bouchard had to content herself with the deepest run into a Masters 1000 series event in her career (she lost here in the qualifying round last year) and the knowledge improvement sometimes comes with the odd stutter-step along the way.

"I think I've improved since Australia," Bouchard said. "I feel like I'm playing at a better level. On the court as well, I feel good mentally.

"It's just never a straight road to the top. It's just a learning experience."

Since her aforementioned breakthrough at the Australian Open in January, Bouchard has had a loyal and varied following (known as the Genie Army) which rewards her performances with stuffed animals thrown on the court.

They were out in reasonable numbers again Tuesday, even though Bouchard and Halep got under way just after 11 a.m. (PDT) on the new, improved Court 2 at this ever-growing event.

Bouchard clearly had the home-court advantage – the announcer called it almost "Federation Cup-like" in terms of atmosphere – and when it was over, a tiny stuffed monkey landed at her feet as she was leaving the court. Later, Bouchard revealed she had done a Google Hangout last Monday, and while responding to a fan query, mentioned a monkey was her favourite animal and thus far she hadn't received one yet.

"They listened," the Montreal native said. "Even though I lost, I appreciate my monkey."

Bouchard took more than an hour to get composed after the loss, but by the time she appeared in the interview room, she sounded philosophical.

In all, Halep broke Bouchard seven times, while Bouchard returned the favour six times on a day when the wind occasionally played havoc with the toss.

"If I could have done a few more first serves, it would have helped," Bouchard said. "In the rally, it was just about battling and going for my shots and maybe not hesitating to come in because I knew she would get a lot of balls back. I think I maybe hesitated a bit too much, didn't take my chances."

There were so many momentum shifts in the match, but the final turning point came with Bouchard serving at 4-5 in the third set and comfortably up 30-15 in what could have been a routine game. Instead, she came to the net on a point and wildly missed a swinging volley for 30-all.

At that point, Bouchard appeared to tighten up and played two loose, nervous points. Halep clearly sensed it, started hitting out again and escaped with a win that, at one point, seemed to have slipped through her fingers.

Halep will next play Casey Dellacqua of Australia in the quarter-finals, who advanced after her opponent, Lauren Davis of the U.S., withdrew.

Bouchard was bidding to become the first Canadian woman to reach the quarter-finals at Indian Wells.

Fellow Canadian Aleksandra Wozniak – at No. 241, the lowest-ranked player remaining in the tournament – fell to top-seeded Li Na of China in a round-of-16 match late Tuesday night. 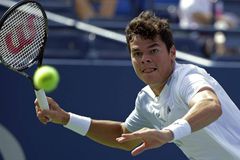 Eugenie Bouchard’s career continues to skyrocket both on and off the court
March 3, 2014 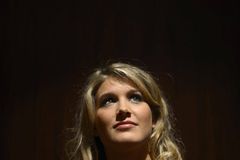