The major-tournament streak endures. Now the next instalment in this sporting drama will unfold at a place the lead actor calls "the cathedral of tennis."

She will match wits with ninth-seeded German Angelique Kerber on Wednesday who ousted fifth-seeded Maria Sharapova, Bouchard's her childhood idol.

Bouchard becomes the first player from these shores to reach the quarter-finals stage at Wimbledon in the open era – a span of 46 years.

"That's cool. I didn't know that," Bouchard said when informed of the factoid after her straight-set defeat of France's Alizé Cornet on Monday. "Another little historic thing for Canada. That's cool. I hope I can go further, that's all I have to say."

Fair enough. Bouchard does her most eloquent communicating on the tennis court anyway.

It might testify to how formidable an opponent Bouchard has become that she managed to win despite committing 24 unforced errors and going down a break in the second set.

When the pivotal moment of the opening set came, during a tie-breaker in which the 13th-seeded Bouchard gave up a 4-1 lead but took the final three points, Cornet couldn't contain her frustration and flung her racket to the ground.

In the second set, played under the roof at Wimbledon's Centre Court ("I follow the roof on Twitter, and he's kind of funny. I hope he's proud of how I played today," she said), Bouchard clawed back from deficits of 4-2 and 5-3 to reach the final eight.

"I've been in situations like that before, so I had full belief and confidence in myself that, you know, I wasn't out," Bouchard told a news conference afterward.

Bouchard played her fourth-round match on a court that boasts a royal box. The 20-year-old Westmount, Que., product is named after a princess from the family that occupies it, and isn't scared to admit she sometimes behaves like one.

"You can ask my coach or my parents or anyone that I can be a princess," she laughed, later adding: "I mean, I can demand a few things once in a while, but I do it with love."

In pro sports, good humour is a luxury afforded to winners. Bouchard, who has already earned semi-final appearances in the Australian and French Opens, the year's first two majors, has also earned the right to have fun.

The tennis intelligentsia has pegged Bouchard as a future Grand Slam champion for some time, but her rapid progress on the sport's biggest stages this season is still remarkable.

Three-time Wimbledon champion Chris Evert – now a commentator on U.S. television – said Bouchard "manages her emotions in a very businesslike fashion . . . that's the way to do it."

Bouchard credits improved psychological preparation and toughness with her run of results in 2014. "Tennis is very mental," she said.

For a player whose only tournament final experience at Wimbledon came as a junior in 2012 (she won), Bouchard has benefited from having to measure herself against the world's top players on an almost daily basis.

"The biggest thing I thought when I played my first full year on the tour last year was … I really felt a difference in the level of how tough it was with my opponents," she said. "I think just having that experience, just playing week in, week out against, you know, a different level than what I was used to, really just opened my eyes to, Okay, this is what it's like," she said. "I think just by playing so many matches, big matches for me at the time, helped me."

The old cliché holds that the most important match is the next one. For a player of Bouchard's talent and career trajectory, it's wise not to take that too literally.

Five things to watch for on Monday at Wimbledon
May 12, 2018 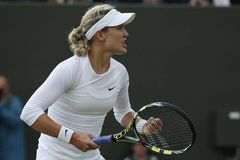