Canada's Eugenie Bouchard qualified for the upcoming WTA Finals when seventh-seeded Angelique Kerber of Germany lost her third-round match at the China Open on Thursday.

Bouchard, who suffered an upset loss to Germany's Sabine Lisicki in the second round, locked up a berth in the season-ending tournament when Russia's Svetlana Kuznetsova completed a 2-6, 6-4, 6-3 victory over Kerber.

The Beijing tournament provided a last-ditch opportunity for players to collect qualification points for the Oct. 20-26 event in Singapore. The $6.5-million tournament will feature the tour's top eight players.

Bouchard, from Westmount, Que., has risen to seventh in the world rankings this season. The Wimbledon finalist was the only woman to make it to at least the semi-finals at each of the year's first three Grand Slam tournaments.

She's the first Canadian to advance to the Tour final since Helen Kelesi in 1989.

In other matches Thursday, top-ranked Serena Williams recovered from a second-set lapse to defeat Lucie Safarova, 6-1, 1-6, 6-2 and No. 12-seeded Ekaterina Makarova of Russia dropped a 6-1, 0-6, 7-5 decision to Roberta Vinci of Italy.

Williams skipped her post-match news conference, releasing a statement saying she had "a little swelling" in her knee. She wore strapping on the knee during the match she said was preventative.

Simona Halep of Romania won a back-and-forth match against Andrea Petkovic of Germany 7-6 (4), 5-7, 7-6 (1), then immediately withdrew from the tournament with a left hip injury.

The second-seeded Halep took a medical timeout for treatment on her hip after the first set, but returned to complete the match, which featured 17 breaks of serve and 105 combined unforced errors (61 from the Romanian).

"It was a tough match against Andrea today, and I had to fight a lot. I'm happy I was able to win and finish the match in the right way, but I have a hip injury and it would be risky for me to play again tomorrow," Halep said in a statement.

Two-time Wimbledon champion Petra Kvitova also advanced when Venus Williams withdrew before their match with a virus. Her illness came days after sister Serena retired from a match at last week's Wuhan Open with a virus, as well.

The remaining Singapore spots were filled by Agnieszka Radwanska of Poland, Caroline Wozniacki of Denmark and Ivanovic.

In men's play, Rafael Nadal was back in form on the tennis court — and in his sharp-tongued critiques of the ATP tour.

The second-seeded Spaniard reached his first quarterfinal since capturing his record ninth French Open title in June with a 6-3, 6-4 win over German qualifier Peter Gojowczyk at the China Open on Thursday, then blasted the choice of tennis balls at the tournament.

"The ball is so bad here," Nadal said. "If you throw the ball on the floor, the bounce goes everywhere. Is not a question of winning or losing. I won in Rio (earlier this year) with this ball.

"It's just that we're competing at the top level of our sport, tennis, and the ball is an important thing."

This isn't the first time the 14-time major winner has complained previously about the ball in question — manufactured by Head. He also criticized the decision to switch ball manufacturers from tournament to tournament, saying it could result in injuries.

Head is a corporate sponsor of the ATP tour, but each tournament has the right to choose the ball it wants to use from an approved list.

Andy Murray echoed Nadal's complaints about the difficulty of adjusting to a new ball each week.

"If you want to see consistently high level tennis, it's very difficult when you're changing balls from week to week -because they all react differently," he said after his 6-2, 6-2 win over Pablo Cuevas.

"I'm sure if you gave golfers a different ball to play with each week, it would take them time to adjust to that, as well."

Nadal wasn't nearly as critical of his own game in his second match back from a two-month layoff due to a right wrist injury.

He was sharp for much of the match until the final game when he double-faulted and made two unforced errors to give Gojowczyk three break points. He fought them off, however, and closed it out on his fourth match point.

Nadal faces another qualifier in the quarter-finals, Martin Klizan, who advanced when seventh-seeded Ernests Gulbis of Latvia retired with a shoulder injury while trailing 6-2, 3-0. 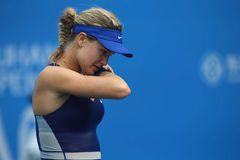 Kelly: Raonic and Bouchard will start feeling the pinch in 2015
September 2, 2014 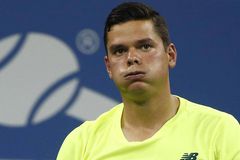